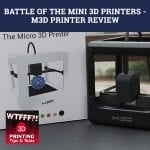 In the first of a series of episodes of mini 3D printer reviews, Tom and Tracy Hazzard start off with the M3D printer. The M3D printer started as one of the most successful 3D printer Kickstarter campaigns, which raised between $3 million to $3.5 million. In its’ post reward production, the 3D printers were commercially sold for $350 each. Tom and Tracy share their insight and opinion on the M3D printer, numerating its features, uses, advantages, and disadvantages. Are you using a mini … END_OF_DOCUMENT_TOKEN_TO_BE_REPLACED