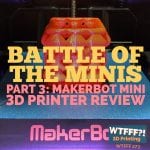 The battle of the mini 3D printers rages on, and it's really heating up! The MakerBot Replicator Mini 3D Printer is not the most "mini" of the mini printers, but does it make up for the fact? Tom and Tracy Hazzard inspect all the functionality of this 3D printer. For all it lacks (or doesn't lack) in size, this printer compensates with power to spare. See if this mini 3D printer is the right fit for you! --- Listen to the podcast here: MAKERBOT REPLICATOR MINI 3D PRINTER REVIEW - … END_OF_DOCUMENT_TOKEN_TO_BE_REPLACED

In the first of a series of episodes of mini 3D printer reviews, Tom and Tracy Hazzard start off with the M3D printer. The M3D printer started as one of the most successful 3D printer Kickstarter campaigns, which raised between $3 million to $3.5 million. In its’ post reward production, the 3D printers were commercially sold for $350 each. Tom and Tracy share their insight and opinion on the M3D printer, numerating its features, uses, advantages, and disadvantages. Are you using a mini … END_OF_DOCUMENT_TOKEN_TO_BE_REPLACED