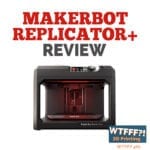 In October MakerBot launched their first new 3D printer in years, since the 5th Generation 3D printer was released back in 2013. Ever since the Smart Extruder+ was released in February 2016, there has been hope that MakerBot, with the backing and resources of Stratasys, is on a path to deliver best in class products, and continue to be a leader in desktop 3D printing. Here at WTFFF!? and 3D Start Point, we were given the opportunity to work with MakerBot’s latest 3D Printer, the Replicator+, as … END_OF_DOCUMENT_TOKEN_TO_BE_REPLACED 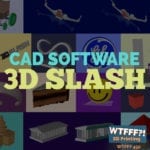 3D Slash is a unique CAD program that is more gamified and fun as compared to other CAD software. It may be more for the beginners and starters in CAD than the more advanced users. It does have some useful tools, like their wood pastes and cursors. It has a free version that has some limitations as to what you get access to, and it has a few types of paid versions. Listen to the podcast here: CAD Software 3D Slash Review   Today I'm going to be talking about another CAD software, a … END_OF_DOCUMENT_TOKEN_TO_BE_REPLACED

It is back to Business Monday and we will be talking about 3D print freelance work. There are two schools of thought on freelance work. One is that you diversify. You should take as many gigs as possible, if you want to call it that way. What kind of gigs are we talking about? Like contract 3D printing if you have a 3D printer. It could be that. It could be design work or whatever it is. I have been talking to a lot of freelance association and other things lately for the … END_OF_DOCUMENT_TOKEN_TO_BE_REPLACED

MorphiApp is a tablet-based CAD software that I think is a great starting point for kids or even adults who are just getting into 3D printing and CAD softwares. It has a free version and a paid version. It is only for Apple or iOS based devices for now though. But is impressive in it's capabilities, and you can do a lot with it, even in the free version. Listen to the podcast here: MorphiApp CAD Software Review Hey, everyone. This is Tom on the WTFFF 3D Printing podcast. Today, we’ve got … END_OF_DOCUMENT_TOKEN_TO_BE_REPLACED

3D Prints for Your Pet The CAD file libraries are full of 3D prints to show off your love of your pet, but there aren't quite as many 3D prints for your pet. What's out there is nice, but doesn't exactly show off beautifully designed items with a more unique twist compared to what you could purchase off the shelf. These files are great starting points to be inspired for your own weekend 3D print project to design 3D prints for you pet. One of the first things you need and should do when you … END_OF_DOCUMENT_TOKEN_TO_BE_REPLACED

Simplify3D, from my experience and in my opinion, is the best slicing software that I’ve come across so far. It’s not free, but it is well worth it’s price. Simplify3D, not only does it have more capabilities than any other slicing software I’ve used, but it really is a very comprehensive program and it has a well done user interface. Listen to the podcast here: Simplify3D Slicing Software Review Hey, everyone. This is Tom on the WTFFF 3D Printing Podcast. Today, I’m going to continue … END_OF_DOCUMENT_TOKEN_TO_BE_REPLACED