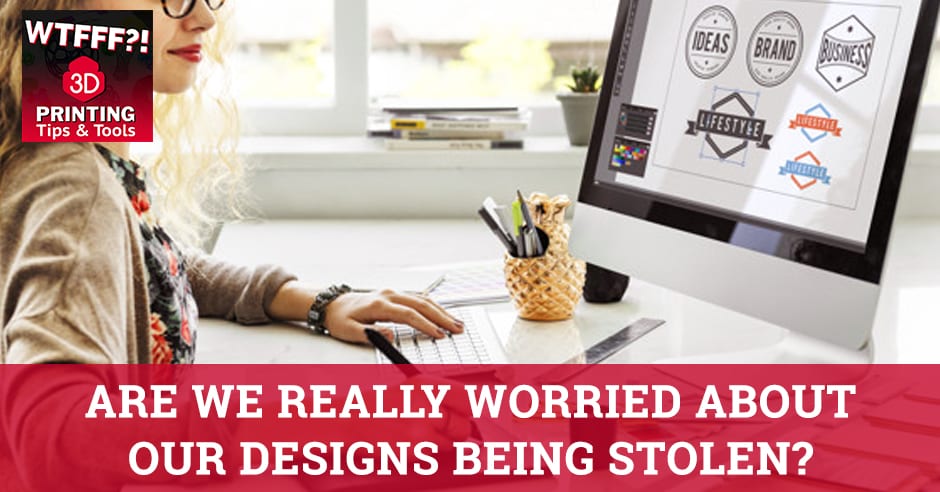 History has proven time and time again that groundbreaking products will always be replicated. It’s not a matter of if, but a matter of when and by who. Designers worried about their 3D designs being stolen are in a way crippled when it comes to the industry. Being in the industry for some time, Tom and Tracy Hazzard talk about their personal experience in design theft by a household name. They discuss the different views and impacts this fear brings to the table and explain their stand and perspective on the subject matter.

Are We Really Worried About Our Designs Being Stolen?

Today is a discussion about a comment we received on Facebook from a listener. We had to sit back and say, “Do we really feel this way or not?”

A long-time listener, Joseph, who says he loves the show commented on our episode with Hector from 3D Shook and said he was really happy with Hector’s response to our question about being worried about his STL files being distributed unfairly or stolen essentially. Joseph said he feels that our crippling fear of people stealing our designs is hurting us and not helping the 3D printing industry either.

This is the Ask Us Anything segment. This is a discussion about a comment we received on Facebook from an audience.

A longtime listener says he loves the show but he commented on our episode with Hector from 3D Shook. He said that he was happy that Hector’s response to our question, was he worried about his STL files being distributed unfairly or stolen essentially? Joseph said that he feels that our crippling fear about people stealing our designs is hurting us and not helping the 3D printing industry either. I don’t think we have a crippling fear about our stuff being stolen. We’ve made some decisions about what we’re willing to do with the files that we create.

It’s a more complicated history for us because we’re in an industry where we deal with that single day. We do so much business in China. We know exactly what it’s like to have your design stolen. In fact, Staples stole two of our designs. We’re well aware of what happens to do and you can’t do anything about it and all of a sudden, in our case, we’re out of income. We didn’t get our royalty. We know exactly what that’s like and honestly, we’re not afraid of that. It’s not a fear that I have that someone’s going to steal our design. It’s a different problem that we have because of our position on WTFFF?! as well as having some design leadership in the types of products that we make. There are some issues with them not turning out well. That’s where we’re sitting back. STL file gives someone too much flexibility to still not make it successfully the way that we did. We found this. We tried to give you your tie file.

To give them the file of our 3D printed tie because we were looking for an outsource to print it beyond what our capacity is with our machines here because we’re doing new things all the time.

We even did that with the angel early on too. It’s been that thing and they come back in poor quality or they don’t print at all.

There are few people who have been able to print the tie print and professionals are doing it. I’m going to give a shout-out to Patrick at Voodoo Manufacturing here. He did a fantastic job. In fact, on the printers that they use, it printed about half the time that it takes to print on ours and the quality was flawless. It may have been a better quality that comes off of our own machine sometimes but that was rare. We’ve had many people struggle and fail to be able to do it.

If I have a fear of these things, I don’t want to sell someone a file or give it away and have them not be successful in making it. That bothers me way more than someone is stealing it. If it’s good, they’re going to steal it. Fine, I have more of a problem of them being unsuccessful in doing it and having it say, “It’s a bad design.” That bothers me more.

There are so many variables in slicing software, printers and how they work that I’m much more comfortable delivering a stream through 3DPrinterOS or something like that where the slicing settings are defined there. You stream the print to a printer and you know it’s got a better chance of success than putting an STL file out there that anybody could do anything with.

Our question to Hector was a little bit different. The thing is, Hector has got a design library and he has designers who’ve contributed designs to that and he’s at a place where he was looking at expanding and having outside designers come in and bring designs into that. When you do that, you have to offer them some moderate amount of protection because you’re not paying them to put their designs on there. You have to be able to say, “You’re going to get paid, but someone will buy at once. They’ll print 100 of them and you only get a buck up from it. Sorry.” That’s not an okay situation in which to attract good design. That’s more my problem with that situation. That’s kind of the pin-shaped model as well.

Stolen Designs: If the only thing that is of value at the end of the day is the design, then the designer is the manufacturer and they deserve to be paid for that.

To me, it’s purely financial. It’s not fear of somebody stealing designs. We’ve done over 250 retail products in the last years and we know you’re going to get knocked off especially if it’s good and you’ll move on to the next one. You make as much money as you can and you move on and we don’t waste a lot of time fighting people in court over designs that are stolen. We let Staples get away with it because we’re not going to go waging some war that because even when you win, you lose. The reality is the designs that we create, we put a lot of time into them and there’s a value associated with that. I’m not doing this to give them away for free. I can understand somebody doing that considering it as a marketing expense. You’re trying to establish your credibility or whatever. You could do that if you want to, but we don’t need to and I’m not interested in doing that.

We don’t have a marketing budget here. Let’s be clear about that.

If I’m going to put a file out there and allow others to print it, I would prefer to stream that and there are fewer people working on the technology for exactly this reason.

The case goes too. The tie is not a good example of it but when you’re creating something that’s a toy or something that could potentially be printed wrong, and then a part breaks off and some kid swallows it or something happens, somebody gets hurt. That’s the considerations that I think about. That is because we’re both burdened and experienced in this world of product design and liability so we know what happens there. I don’t want anyone to get hurt or not be satisfied with my products. That’s how I am.

I am curious about how that will play out. We’re going to have an episode with Tom Simon and our dealing with the licensed rights management. It’s an interesting topic but you have to look at it as there has to be commerce at some point or you’re going to keep getting people who have time on the side to put up designs. It has to at some point, pay for it. Whether that is companies selling out funds to get their marketplaces filled with great designs, but it doesn’t happen in the marketing world, retail or anywhere that those designs come free. No one has free products there. There may not be a designer involved in that but a company is making it and making money. If the only thing that is of value at the end of the day is the design, then the designer is the manufacturer and they deserve to be paid for that. Will it get knocked off? It will. It’s the reality of it but that designers should be being paid. They sold well and that’s why they got knocked off and now they’re making thing number 2 or 200. That’s what happens. That’s how the process works and commerce of the world.

I’m thrilled if somebody wants to reverse engineer and try to recreate my tie design. Go for it. You learn a ton from doing it and be a better designer of other objects in the future for it, by all means. That’s this completely fair game. It’s flattering to an extent so go for it. We have our perspectives from our past experiences and our history. We are designers, it’s what we are living on. It’s not a hobby at all. We respect other people’s opinions. Joseph, I appreciate your comment and I hope you’re okay with us talking about it because we didn’t ask you ahead of time, but it’s out there on Facebook for everybody to see anyway. We appreciate everybody’s differing opinions and they’re good subjects to talk about.

Maybe our thoughts will change in the future. It’s always flexible. We have business schools now that are different than they were a year ago when we started this podcast, and there will be a different year in the future when the market changes as well. Maybe there will be a time in which we’ll be giving away files as a part of a marketing promotion program. It could be happening and sooner than you think but the reality is, we don’t have a marketing budget. This is not what our podcast is all about. We’re having to fund this out of our pocket. To giveaway our designs on top of that, we don’t have time to make more designs at this point.

A person like Hector at 3D Shook, they’re in the business to make money. They have investors and they have to produce a return. It was a valid question to ask if he was concerned about it. It’s a certain thing that Hector was concerned about. He has his opinion on it.

He’s realistic about it too, though, which is a good thing. I liked his response. I asked the question because I wanted to hear what he would say.

I thought I asked that question.

I don’t know anymore. It has been so many interviews since then.

It’s alright. They all run together. It doesn’t matter. This is great. We love having a dialogue with our audience. It’s happening over Facebook, Twitter, in person and it’s happening in comments on the show notes blog post so keep it coming.