In this WTFFF?! episode Tom and Tracy discuss some exciting news coming from the Toy Fair in New York. There will be a 3D print version of the ThingMaker, which is a Mattel toy from the ‘60s. Mattel has recognized the opportunity with modern desktop 3D printing. They are reviving the name of the ThingMaker and the concept of kids making their own toys, this time using 3d print technology. Is Mattel just jumping on the band wagon, or could this be a 3D printing game changer?

Jumping On The Band Wagon, Or Is ThingMaker A 3D Printing Game Changer?

There was some exciting news last week out of the Toy Fair in New York. There will be a 3D print version of the ThingMaker, which is a Mattel toy from the ‘60s that was more like a mold. We weren’t alive then, I am happy to say, but it was a toy where you bought these little molds and had some type of plastic resin that you poured into it with different colors. If you were really creative, you could make your own really creative toys.

Mattel has recognized the opportunity with modern desktop 3D printing. They are reviving the name of the ThingMaker and the concept of kids making their own toys, and now they are putting out a 3D printer. I have to say I am really impressed with the design of this 3D printer. I’m not totally impressed with the things yet, but the design of the printer itself is very cool. It looks like a toy, which is what it should be. It’s a little Easy Bake Oven-ish, but bigger. That was a Mattel product as well. It makes sense that they are doing it.

At WTFFF, we currently have several manufacturers sending us evaluation units of their mini printers. We will do a battle of the mini’s. This won’t be in it because it won’t be available until the fall. I’m glad it’s not in it because of the differences. The mini 3D printer manufacturers don’t want their printers to be thought of as things that can only print toys. They are into this for people to make other kinds of objects, not that there’s anything wrong with toys.

But it makes complete sense that Mattel is a toy company and is making this. What they have done that is very impressive is they already are working very hard on their iOS and Android apps. The difference here is that Mattel is a thing maker. They make toys. They are the manufacturer of these things, and that’s the real problem here. The 3D printer companies are makers of 3D printers. They want to keep it open; they have no idea what to make.

That’s the real problem that we find all the time. They don’t even know what to make. At least Mattel has a really clear direction on what they want to make; the 3D printer is just a tool to do it. I agree. That’s what I wanted to say, too. They have really thought about how kids are going to make them. They are making these parts that you print modularly, so even if they are showing it in one take, the reality is you can take those pieces apart and pop them together because they are all using the same kind of thing.

That’s the thing about Mattel and making these parts to be printed. They are toys, yes, but they have really thought about the modularity of it. You can take parts apart that are shown to be assembled as one kind of figure or toy, but you can pull it apart and snap it together with others. They have made their systems all modular.

If I were a parent buying this for my child, that kills all of the mini printers. It’s a category killer right there. The options here: I am thinking about how hard it is to learn CAD, and if I am going to spend $300-$500 on a mini printer and my kid isn’t going to use it enough because there isn’t enough stuff to print. In the meantime, while they are learning CAD, because they do have to learn CAD first. They are partnered here with Autodesk, which means there will be a learning opportunity here. There is no way Autodesk is going to let it fly by that you just output and print things. There has to be a process by which you are learning CAD in it so they can hook you into Autodesk products.

This is a category killer. This is amazing, and it’s going to hurt all the other 3D printer companies who don’t get on board and figure out what the heck you should make. What the FFF are you going to be making? You had better figure that out now because you’re going to play catch-up otherwise.

The advantage of all the existing mini printer manufacturers is their printers are already on the market. They are available, and they’re selling them. They have figured out the machine part. They have said that if they are on time, if they meet their schedule, this won’t be out until the fall. They probably will get this done by Christmas sales for 2016.

If you are a competitor of theirs, you should make sure you have your ecosystem ready. Get project packs and kits ready. I think you have to do more than that. You better have a bunch of printables ready. It can’t just be a pack. It has to be a library to compete with this. I don’t think you can come out with less than 100 pieces, and you better come out with 100 every month. 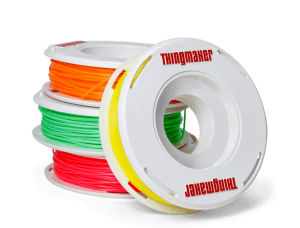 From what they are showing in their video—and I am sure a lot of this is smoke and mirrors because this is for Toy Fair—there was an app that they showed where you had all these different parts. You could spin the wheel and pick parts and put them together and decide which ones to print. Think about how many colors of filament they are going to sell. I guarantee you it’s going to be a complete system where you have to buy their filament because all the colors are matched in there. They are showing you that they have a proprietary system. They have thought about what it is. It’s kind of like Legos, but it’s not as basic as bricks. They have forms of parts that snap together.

The thing is, you guys are way behind out there that you haven’t thought of this already. For those printer manufacturers out there, the reality is they have been in-house for quite some time, 3D printing as part of their design process. You have a ton of catch-up to do. If you don’t hire the right designers to do this, you will not be able to do this off of Freeware Shareware. It’s just not going to happen.

When we talked to 3DShook, look at how hard it was for him. He has a library of 1,200-1,500 things, and he is going to get rid of 30% of it and start again because it wasn’t designed like they thought.

Mattel knows exactly what to design and what to do. The real big killer is that as soon as they roll it out with Barbie and Hot Wheels, it’s done. There is no other printer anyone is going to buy. Their thing is they own these brands that are very popular for toys. If your kid is into that kind of brand, they won’t be interested in some other thing because they can’t print the things they want to.

We have a podcast coming up in the next few weeks that will be with Source3 and Tom Simon. If you are a 3D printer manufacturer, they are talking about the license management of those types of brands. They have a big license with the Army and Armed Forces that you can have the Army logos and make memorial plaques. There are a bunch of things like that. They also have Marvel. What happens is that it can be content licensed out to 3D printer manufacturers to create these packs and other things.

But it has to go deeper than that. It has to go into a product, not something you can put onto something else. Not just a figurine on a shelf. These are interactive toys kids want to play with. But I think that you’re right. It will be interesting to talk to Source3 because they are doing licensed content that can go to anyone. It’s not 3D printer specific. With Mattel and the brands they own, they are doing something very smart. But they will not have everything either.

The interesting thing will be if the system is open enough to accept other designs. If you do create your own CAD system, the interaction with Autodesk will be interesting. If it is broad enough that someone else could design their own thing, now you’re talking about fan art. They may not be open to that; we’ll see. It’s an unknown.

What will be really exciting to see—again, they are only giving us a preview here—is if kids get into printing these things, they get their own ideas to add to it, are they going to allow them to use those building blocks without completely reverse-engineering it? Certainly, as kids get smart enough and learn CAD, they can do that, but will they allow them to customize and manipulate their own things? I hope so. I hope they don’t limit the kids’ imagination and creativity. I’m very excited about this. It really will be fun to see that later in the year.

I keep thinking about the idea that 3D printing is having a difficulty tipping. The tipping point will come. If 3D printers are under every Christmas tree and are the hot product to put under the tree, this could be it. If that happens, we are going to move up the speed of 3D printing’s accessibility by a whole year, I think. I was not expecting it to tip until late 2017. But now I’m thinking it could be January 2017. It’s a big step in the right direction. It will do good things for the industry. I can’t wait to try it out. We’ll keep an eye on that and let you all know.