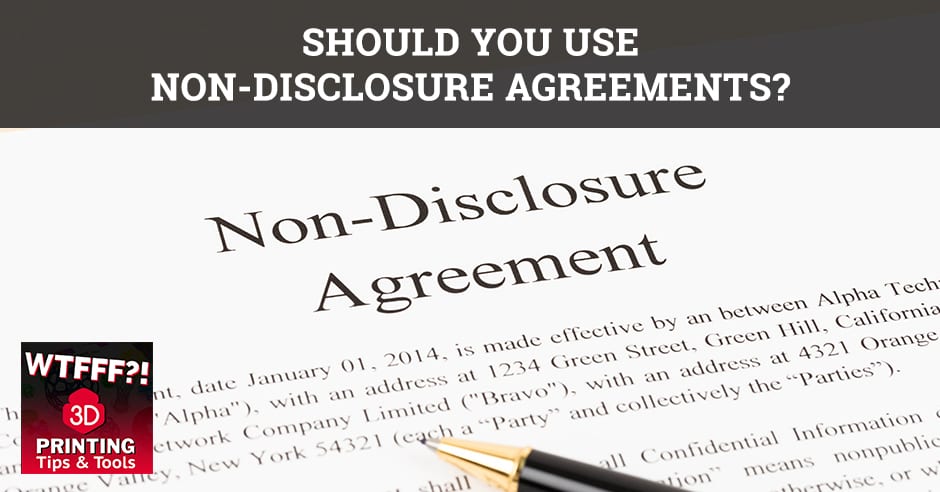 Do you real need non-disclosure agreements? In this WTFFF Ask Us Anything segment, Tom and Tracy Hazzard kick off their entrepreneur week by discussing the little known consequences of using non-disclosure agreements or NDAs when pitching a product. They also walk you through how they file their provisional patent. While you may feel protected, find out why your NDAs could be hurting you more than you realize!

Should You Use Non-Disclosure Agreements?

Because we are at CEO Space, we thought that the week should be about entrepreneurship, networking and all of the things that might be involved in getting yourself out there as an entrepreneur and getting more help. We get this all the time, people want to talk to us. We get a lot of inventors and entrepreneurs and we are always willing to talk to you.

They often have a product idea.

They’re all nervous like, “I don’t want to talk about it over the phone. I don’t want to email you about it.” If they’re close enough, we’ll have an in-person quick little meeting.

It’s a little easier but we can do it over on Skype too. The point is everyone’s afraid of sharing their idea and their information like we’re going to do something with it or that it’s going to get exploded. I understand that because there are a lot of these vendor groups that are predatory. I get why people feel this way. Tom and I are of the opinion that you don’t need non-disclosure agreements ever. You don’t use them.

This is more than twenty years of experience on this subject.

I’m sure we’re going to get maybe some lawyer hate mail and our lawyer is going to send us a nasty Facebook message.

We are not giving legal advice, let’s state that off the bat. From our experience and our practices, we don’t bother with NDAs because all you’re doing is signing a piece of paper that says, “One person is going to disclose something to the other and the other one agrees not to disclose it except under certain conditions. Except if it’s already out there and they knew about it or they can prove it.” Let’s say someone violates it, what are you going to do? You’ve got to spend money to go and sue them to cure that breach. That’s never a good situation for anybody.

It’s certainly not going to get what you wanted out of the relationship with them. It’s unenforceable that it’s not worth the paper it’s printed on. The real problem is going through the NDA process stalls your pitch timing. When you go and say, “I want to have an NDA signed.” If the guy says okay, he has to hand it to his lawyer and that takes weeks. Sometimes the lawyer is like, “I think this is too risky for you to hear any idea that’s in your field for your business. Don’t do it.” It could derail it.

If your lawyer is going to say, “You need to change this and this,” you’re going to go back 2 to 3 times hammering out this NDA. The wind has completely taken out of your sails for whatever interest or excitement you built to get that person to listen to you in the first place.

We don’t do it. That doesn’t mean we hold back information. We never do because in our opinion, things get knocked off all the time. That’s our world where we live in. It’s going to get knocked off. Our reality is we know we can do it faster, better get it out there, and you’re going to want to work with us. If they steal our idea, they’re never going to do a great job of it.

They aren’t original to begin with.

They are missing something and the reality is, we’re coming up with a new idea the next day. That’s the way we are. Creative people that which is what we are. We got plenty of ideas. Sometimes our biggest problem is figuring out which idea to execute first.

The screening process and having these conversations with companies are part of our screening process. Let’s walk you through on what we do. Typically, we file a provisional patent if we think that it has that potential but not every idea does.

If we think that there’s some intellectual property here to protect, we will. We’ll file a provisional patent because that protects you. In the United States, we’re on a first to file situation. If you share that information with somebody else, they think, “That’s a great idea.” They go and file a patent application before you do. They win and you don’t, even if you invented it.

It doesn’t matter. The point of conception is not the date that goes back.

Who got the idea first won’t matter, but the provisional patent is pretty easy to file. If you use a lawyer, it costs less than a full patent application does. We tend to do them ourselves because we’ve been doing it for such a long time. It is $130 filing fee and you can do it online, upload all your documents, PDFs. It’s easy.

We don’t always do it ourselves. Sometimes we do the search ourself and we file a provisional. That’s when we aren’t sure we’re going to completely go into full implementation on something. We don’t think we’re going to do a market screening of it and that’s where this falls into.

We’re going to disclose it.

The first thing we’re going to do is talk to the market about it. We’re going to talk to a potential manufacturer. We’re going to talk to a buyer who might buy it. We’re going to talk to people who might use it. We go out there so that we can freely discuss the idea with them and say, “We’re patent pending.” Because we are, our provisional patent is pending. In the process of that, a lot of times, we decide that the idea isn’t worth it anymore and we don’t go forward. Many times, we have three times sold it straight out of the provisional from the first conversation we had about it. We sold three patents in 30 days because it happened to hit the conversation at the right time. We had already filed the patents. It was very easy for someone to go in and take that at that point. That’s another conversation all in that itself about what happens with provisional patents.

Strategically, why that may make some sense rather than waiting until you file for one. If you want to know that, send us an Ask Us and we’ll address that.

We’ve also had ideas where we got far down the road of almost selling the idea and the provisional patent stage. There are many barriers that kept coming up that we realized it’s not a viable product. We didn’t file the full patent after that. That happens often.

In that case, we saved a lot of money, especially if we filed it ourselves. We spend our time obviously and $130 filing fee. Even if we used the lawyer, we spent a couple of thousand dollars instead of $6,000 or $8,000.

That is a valuable process where you have to go out there. People talk about social proof of things or social proof of concept. That testing and proof requires disclosure. You need to find a way to be free about that and not encumber it with this NDA process. That’s how we feel about it. We’ve done it and it’s fairly successful for us. We have an 86% commercialization rate. We talk about that all the time. We have 36 patents and we have an 86% commercialization rate. The national average from the USPTO is 47%. That means that 86% of our 36 patents have been made, produced and sold.

Some of them are way more successful than others. We have some that are wildly successful, but they got sold. That’s the important part. They were out there and that’s a big deal. A lot of patents are shelved. You spend all that money and then you do nothing with them. We don’t do that. We wanted to share this process with you about how we do it. Take it or leave it. A lot of you are going to be deadset on your NDAs and as I said, “We don’t have a problem signing them.” Typically, when we talk to an inventor if it’s important, but we don’t think it’s necessary.

We don’t do it when we disclose something. That’s some at least useful information to understand whether you start doing that yourself or not.

It is a little insight into how we do things. If you have other questions about anything 3D printing, entrepreneurship, inventors, whatever, we’re always here to answer them for you. We do personally answer them. It’s @HazzDesign anywhere in social media and HazzDesign.com is our website.

You can go there, send us an email or send us a voice mail. There are many ways to get in touch with us. Please feel free to reach out.