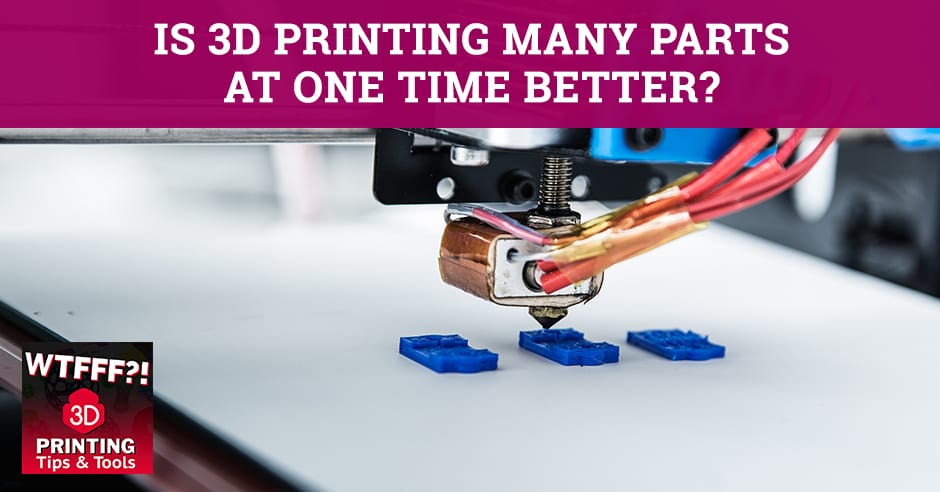 Is 3D printing many parts at one time better? In this episode, Tom and Tracy Hazzard answer this great question from one of their followers, Eduardo. Based on their experience, Tom and Tracy talk about the pros and cons of printing multiple objects at the same time. Learn the sweet spot on your printer and why it’s absolutely critical to know if your build plate is well-calibrated before trying out multiple prints at the same time. In mass printing, speed should not be the only consideration. Get to know the other factors that can affect the speed and ease of your print.

Is 3D Printing Many Parts At One Time Better?

Ask us anything 3D printing.

It’s nice to hear from Eduardo. He comes to our site when it’s hacked and can’t send us a form. We apologize for those of you who have fallen into that as well and thank Eduardo for putting that to our attention because that was one piece that hadn’t been fixed yet on the site.

We mentioned our site got hacked, again, which is unbelievable. All the permalinks on the site had to be rebuilt. I don’t even want to know what all that means, but the reality is it meant that our Ask Us Anything question submission form wasn’t working, which it is now, again. It’s on the homepage at 3DStartPoint.com. When you scroll toward the bottom, it’s right there.

He sent us an email.

He knows how to reach us because he’s contacted us before. He’s asking, “I need to print 200 of a particular item and it takes an hour to 3D print.” He’s wanting to know, “Should he just print one at a time on the build plate or should he put the maximum number he can fit on the build plate? Is there a benefit one way or the other?” It’s a good question.

I understand the idea that you want to print as many as you can overnight. You want your printer to run 24-hours a day. We do that at the holidays when we do the angels. The angels run about 4 to 6 hours or somewhere.

It was a little less than six.

We want to run two overnight at a minimum so that the printer is running 100% overnight, it doesn’t just shut off, but it doesn’t work well for that particular print. It comes down to whether or not your print works well that way.

Let’s talk pros and cons. If your print takes one hour to print normally and you print one at a time, you’ve got to tend to the machine once every hour. If your printers in your home and you’re working from home, that’s not a big deal. You can tend to the machine. The advantage of doing that and doing it once every hour is that if there’s ever a problem in the print, you’ve got a problem with only one and you’ve only wasted a maximum of one hour. It makes sense, though, you want to be more efficient, you don’t have to babysit the machine every hour. You want to run six at a time.

What we discovered was that when we batched the angels is that we had to clean them up. That cost us time in the end because we would get these hairs and strings going between the different pieces. We can do an angel in isolation and never have the hairs or are very few of them so that is no clean up at all, but the minute we put more than one on the bed, we had that problem. Then clean up time is a waste of our time because you’ve got to sit there and hand clean them all up, remove all the hairs and sand them. We didn’t want to do that.

In that case, anytime we would have saved by not having to attend to the machine more often, we lost by having to clean up at the end. You should and anybody 3D printing an object should be able to dial in the settings and use the right material so you don’t get hairs or strings. That should be everybody’s goal. It certainly is our goal. Sometimes we have found certain objects even beyond the angel. For a client, we were making a stud finder that we were designing for them. We made that model in several parts because we were doing several different colors. We made several different prints of different parts and then assembled them to make that product. When we would put one of something on the build plate, it printed it with no problem. When we put multiples and especially if they were relatively close together on the build plate, we would get tons of hairs and strings between them and it was a pain in the neck to clean up.

That’s what you have to evaluate with your particular print, what you’re printing and check that out and make sure because cleanup time is a waste of time. That cuts into the savings.

If you’re always printing a relatively small object in the center of your build plate, that’s going to be a forgiving situation. It’s not going to point out that you’re not entirely level. Once you start going wide and out toward the edges, you’re going to understand how well-calibrated your build plate is. Here comes the other problem that goes along with that. Let’s say you put eight of them on the build plate, you could fit eight of your objects. It doesn’t always save that much time anyway when you’re printing multiples.

3D Printing Multiple Parts: It doesn’t always save that much time anyway when you’re printing multiples.

I found a lot of time that it doesn’t even save any time. It again depends on your printer. It depends whether you’re using a closed system or you are using Cura, Simplify3D, MakerBot software or whatever. You need to test that, but we found that it doesn’t always speed it up. When you’re going to have a problem, you’ve got eight of them there. Even if it’s not a problem at the beginning of the print on the first layer, maybe there ends up being a filament feed problem halfway through. Now, what’s happened? You’re printing eight of them, in this example, it would take eight hours long. You have a problem halfway through, four hours through the print, you’ve got a problem, it ruins eight pieces.

You can have a problem with the sweet spot of the printer, which is what we call the area which it prints optimum without hitting calibration issues. That’s your center section and it might be four inches. You don’t know what it is and every printer is different. You have your sweet spot issues, what happens when you have filament jams or problems, you lose a lot of time. It also depends on your time schedule that you have to print these 200 pieces. That’s a big deal. The other thing you have to think about is when you’re creating 200 of something, are they 200 different things? If they’re not 200 different things, then you might be missing the point, the great impact.

Think about it if it was place cards for a wedding, napkin rings or something like that. Wouldn’t it be completely cool if each one had a different set of initials on it for the person who’s sitting there or the person’s name on it? You’re missing the point and then if you put ten on a building or something, you’d have to make twenty different files to get all 200 with each one of the different names that you needed on there. It’s still a bit labor intensive if you were taking advantage of all the great things that 3D printing can do.

The benefit is they don’t have to be identical.

Doing one after another makes it faster.

I understand though, wanting to be productive. If you have 200 of them, it’s going to take an hour each, that’s 200 hours of printing. That’s a lot of printing. You want to take advantage, especially overnight of making that print run all night long. In that situation, it’s probably worth trying and doing a print that’s 6 or 8 of them to go overnight while you’re sleeping and hopefully, you won’t have any problems. When you think about it, you don’t have a lot to lose. On the one hand, it’s risky and on the other hand, you don’t have a lot to lose because you’re going to be sleeping during that time anyway. If you’re printing one at a time, you’re not going to be printing any.

You would have only made one during that time when you went to sleep and that would have been it.

By trying to print 6 or 8 them, you might be able to be more efficient, take advantage of that sleeping time and get eight of them out. The downside is, it might not work and you lose eight of them then you just start in the morning anyway and you may not be any worse off.

We did that a few times in the early days when we were making garden markers and some other things. We would run them overnight and if they didn’t run, they didn’t run. We’d just start up again. We do one at a time during the day because we were able to monitor it.

All things being equal, you have to evaluate a little bit for yourself. Make a judgment call as to what’s more important to you and run some tests. Running one at a time is probably good for having the least amount of surprises and errors but it takes a little more of your time. Running more is more efficient if it works if everything is golden.

The other thing is that if you have kids, you can pay them to monitor your machine because it’s not that hard. You pay them, give them $1 for a day’s work and they just scrape it off the build plate, hit the button and start it again. It’s not a big deal.

Also, keep an eye on that filament too. As you’re going through 200 of them, you may go through a full spool of filament.

You can always fix your GoPro on it and just keep an eye on and watch it over your iPhone. See when there’s a problem and then call your teenager and say, “Go and fix the machine for me.”

It was a good question from Eduardo Martini in Brazil. Thank you so much for that. I hope these thoughts help you consider that.

Good luck printing 200 pieces of something. It’s great that you have a project like that.

If you have a question regarding how you may need to process a 3D print or anything else regarding your materials or printer, please come and find us at 3DStartPoint.com.

If our site is hacked again or there’s any other problem, you can always find us on social media at @HazzDesign. You can ask us the question right there. You can direct message us or just tweet us, no problem.

Thanks for reading. We’ll talk to you next time.