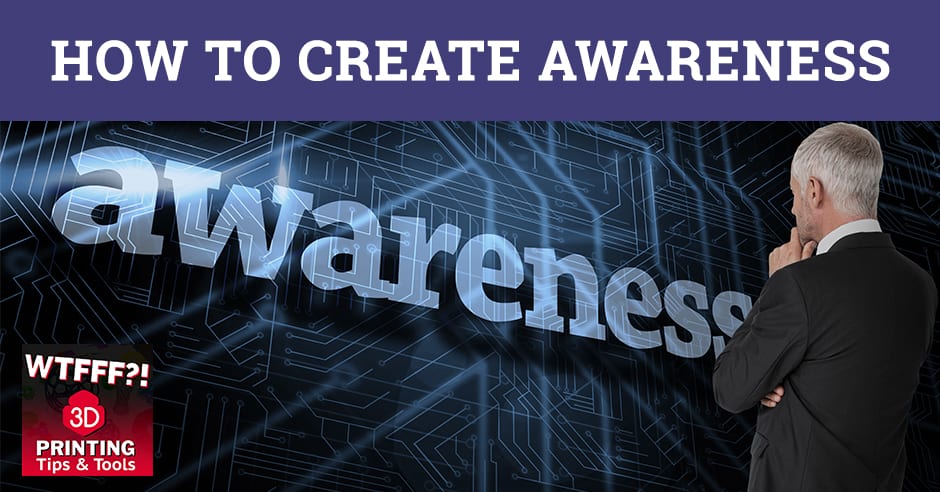 So you have a great business idea, but how do you tell people about it? In fact, who do you tell about it? From social media planning to product release strategy, in this Ask Us Anything Segment, Tom and Tracy Hazzard share how you can create awareness about your business as they discuss their successes and struggles in building brand awareness. Tune in to today’s show and discover how you can create awareness for your audience and launch that business smoothly!

How To Create Awareness

We are in business mentorship because we have our contest announcement of our big winner.

We’ve been having each of the finalists pitch us. There’s something that’s come out of that that we thought was appropriate for an Ask Us segment.

It’s a running theme of problem areas that they need mentorship with. That is creating awareness for their business and putting a plan in place for that is difficult. Is it appropriate for 3D printing? There’s so much information. Do I go global? Do I keep it local? There are a lot of questions there.

It’s all too common for entrepreneurs who are coming up with a business plan to often center around a product and all the problems that come along with it. Not only in designing, developing and conceiving that product, but also tooling, producing and distributing it. Too often, people think, “I’m going to put that product out there on the market and then it’s going to sell.” The business plan is not considering the potential of, what if it takes a long time to ramp up?

There are a lot of guru style books out there, a lot of podcasts and a lot of things about how easy it is to enter Amazon and start selling products.

We’ve read some stuff about organically selling things on Amazon and then taking all the profits of Amazon for the first six months and put it right back into advertising on Amazon. That’s one guru’s strategy for success.

I don’t disagree that it will work if you have the awareness to begin with and can get that launch going from the get-go. We have the same problem with our clients who are hundreds of millions of dollars of business in the mass market already. Yet, they go and put their product online as an afterthought. It barely sells 400 pieces a year.

They enter a new category tangent from what they’ve been doing and they think, “I’ve been selling this over here. I’ll sell in this category.” There’s no awareness of them being there.

They don’t know how to handle it either. They don’t understand that you have to put a marketing effort into this. You have to do it. We’ve been complimented saying that we are doing a good job of creating awareness. I don’t feel like we are doing enough every day. It’s my struggle with the business every day. It’s like, “How much more awareness can I make?” It’s a lot of pressure and a lot of going out there. Our place and fans are growing. I see all of those things are growing and I should be accepting it as good enough and a good growth pace. It’s always a pressure for me to handle that part and to make that growth increase at a certain percentage and measure it in any way. It is the hardest part of any business. Even when you think we’re doing a good job at it, it’s still a struggle every day to find out what works, what doesn’t work, what can grow, what’s changing, because there are also things changing so fast.

Especially if you’re going out and getting investors for your business to launch, this is an important consideration. If you don’t have an audience, you’re going to have to borrow or get invested or budget a whole lot more money for marketing. You’re going to be marketing on a shotgun approach to a much larger group of people to capture that half a percent of relevant people that might see it.

It’s challenging in 3D printing and that’s one of the things. The good news is if you want to search on 3D printing #, it’s focused too. You can find a lot of things out there. You can find people to talk to, you can follow them and you have a path to do that. When you need to create a bigger audience, like people who will shop on Amazon or on Etsy or wherever it is that you want, you need to create an audience to drive to do something and to take any action. That’s harder because you’re working with a smaller pool to begin with. How do you enlarge that pool to a size at which the percentage of return is great? We used to have this thing back in our old days of business, where you would put out a mailer and you would expect a 2% return on that mailing.

If you had a very focused customer’s mail list or a very focused industry mail list, then a 2% return was a good return. You could pretty much expect that action item out of it. It might take three months before you saw the full 2% return. It wasn’t an immediate thing because you weren’t mailing, but you still saw that return. Nowadays, you’re lucky if it’s 0.50% for a lot of things and it’s because we’re inundated with so much information. When you tweet, your chances of someone being on at that moment are going back that far in their log or seeing it. It’s so much slimmer, but you have a huge pool of audience who might see it on Twitter.

It’s a visual sight and a lot of people don’t realize that about Facebook. Facebook is filtering it and you might not see that post even though they’re following you. Facebook only delivers it to a percentage of that post of your followers. That’s why the repetition is important, but not being exact duplicate over and over again. You don’t want to annoy them until they unfollow you. That understanding of how it works is important. I highly suggest that you get yourself a social media bootcamp. I took one and I’ve been handling social media for a long time. I’ve been blogging for a long time and doing all of that. I felt pretty capable, but I decided to take a bootcamp from our friend Katie Wagner, who helped us build a couple of new channels that we weren’t comfortable with.

It was the best half-day I spent for my business. It’s crazy because I thought, “I know that. I’m good. I handled Twitter. I’m fine,” but I learned many little details about how I could improve my profile and how I could fix this. While I was in the class, I was able to do most of that. It was all executed and ready to go. I learned better strategies. Go to your area and find a bootcamp. Find a social media expert to talk to about these things or online. There are a bunch of them on a lot of these core structures. There are a lot of online classes about it.

In our area, if you happen to be in Southern California and read this, can anybody go and sign up for one of Katie’s courses?

Katie Wagner Social Media or KWSM team is her Facebook but she does it.

She does it every quarter and it’s a week where the classes are every Friday.

It is every Friday for four weeks.

There may be similar social media and consultants in other areas of the country doing similar things, but we’ll at least post up Katie’s information on our website as a resource for people.

It was very valuable.

You handle Twitter, but for me Twitter is very much like live TV. If we think nowadays, we have DVRs and on-demand. You can download things all the time or you’re watching things on Hulu and you always get a commercial for something. With Twitter, it’s like you send it out there and it’s live. It’s in real-time and once it’s gone, it’s gone. If people miss it, it’s like missing a live TV broadcast from ages ago.

You’ve got to repeat it, but you don’t want to be so repetitious that you bore them. There’s a lot of figuring out your schedule and figuring all of that out is as important as what the message is. That’s another key thing. When figuring out when you’re building awareness, you need to prep your audience to being a responsive audience, to one that’s going to answer back to you. That’s where I feel like we need to do more work because I’m not hearing enough from you guys out there. We hear from some, don’t get me wrong, but I want more questions. I want more emails, tweets and feedback. A lot of people think that there is an agency behind a lot of businesses and they feel like it’s no name there. We are actually behind our social media.

We have employees that we work with, but everybody’s virtual. We’re recording it ourselves and we’re uploading it ourselves. We are also answering your email and handling our own Twitter.

There are many ways to build awareness and to gain awareness. The primary message is don’t overlook that. You can take some of these suggestions or come up with your own plan, but at least come up with a plan and realize how critical it is.

Build time and money for it.

There’s nothing worse than putting that product out there, expecting it to sell and sales trickle in and you were depending on that.

Think about it this way, when you launch a product and maybe you sold four because you are relying on organic traffic. You haven’t made any income from it at all. If you had built your audience over six months, maybe when you launched it, you’ll sell 40, you’ll get reviews and it will build you up. That will build on itself. That time is worth it because if you have to go to someone and said, “I launched and I only sold four,” that’s a failure. If you said, “I waited, I built an audience and I sold 40,” and that is growing every month, then they’re going to say, “There’s something there.”

Regardless of whether you take the advice and do this or not, the reality is plan and build in so that you can survive the ramp-up. We’re only saying let’s be intentional about it. We think maybe some people put the cart a little bit before the horse to use an old cliche. The thing is make it intentional and plan and don’t get caught off guard.

Tweet us, email us, do whatever, it is @HazzDesign or HazzDesign.com everywhere. Thanks again for reading.