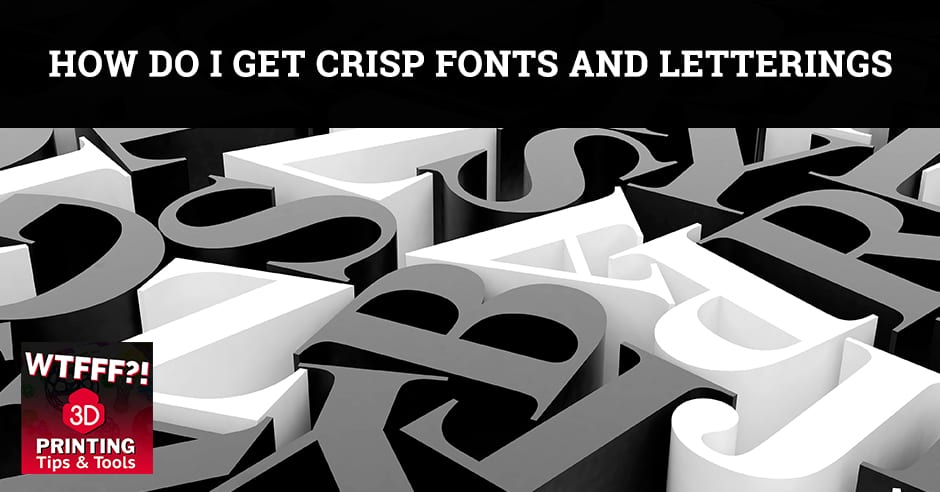 3D printing is a complex process. Producing designs and even crisp fonts and letterings are as intricate as the printing itself. Getting font letters and numbers to show clearly takes manual adjustments in the 3D Print design process. In today’s Ask Us Anything, Tom and Tracy Hazzard address a question on how to get monograms and dates to be so clear. They discuss in detail font choice, scale, and surface quality, and share their tips and tricks for getting serifs and small fine detail to print crisply.

How Do I Get Crisp Fonts And Letterings

This is where you come to our website, HazzDesign.com, to our Ask Us tab and jump down to our SpeakPipe button where you can record a question with your name and your website or your company or your profession.

Our question comes from Liam in New York. He’s asking about lettering in his 3D prints. He’s having some trouble getting lettering of good quality and wanting to know if we have any suggestions or tips on how to print lettering with better quality in 3D.

You also have to have a clear understanding of what 3D printers are capable of. If you want to print lettering with a font that has hard square edges or has fine pointy serifs, you’re going to get results that probably are not quite what you expect.

You’ve got to think of it like this, if you want a point and you’re printing with something round, it’s probably not going to work well.

At a certain scale at least. There are three major factors: font choice, scale and surface quality is the other one. We’ll talk about each of those things. Font choice in my CAD program, I use Rhinoceros primarily. It certainly has a text feature where I can use any font and it will create line art that I can extrude. I can subtract from apart or add it to a part. It will use any font. That doesn’t mean that can be printed well. I always have to alter those fonts a little bit.

You’ve got to make sure you knock off the edges. You make sure you clean them up. The other thing that we do is the scale part of it. You have to scale them so that when you print, you don’t get voids because you’re printing a micron and a half-width. You’ve got to print in an even resolution.

More space and larger scale prints are better than smaller scale. You start to have problems with certain interior parts of letters filling.

You’ll see little tiny slices of voids in the lettering. Maybe sometimes you want that in a specific Roman style serif where you want the middle to be void and you want the edges to be up, but when you get it in an uneven way across your letters, that’s not good.

I’m going to get a little technical here. With the size of your nozzle, that’s something that on a MakerBot printer you may not know that because it never talks about it or asks you that. It’s a .35 millimeter diameter. On other printers, it could be .50 millimeter diameter. You need to know what nozzle diameter will you have and then realize that that’s the smallest that you’re going to be able to print, especially in a positive letter. In a negative letter, it may be a little different but still if you think about it, you’re never going to have a hard square edge. You’re always going to have a little roundness to that corner because the extruder is round.

Also, the printer you use makes a difference. We found that some printers are crispier and some printers have better edge detail. That would be the way to describe it.

That also comes to the printers where you can specifically change the speed at which you’re printing right around those letters. I’ve even got to the point in a one-color print, making two different models and treating them differently as it’s sliced and go much slower on the letters and then faster in other areas around it. You can blend two parts into one.

Those are some techniques. We had font choice and we had scale.

Now service quality and what I mean by that is it doesn’t matter whether you’re extruding a letter on the surface sticking out higher from the surface of your part or if it’s recessed into it. If you make those letters have a large enough scale, you can put a little radius from that top surface to the side edge. A lot of printers do better making a curved surface than they do a flat surface. When you do that, your letter is going to appear more filled, more opaque and have little better quality appearance.

It makes a better-looking lettering anyway. You don’t want to have that hard edge unless you’re purposefully doing some big block letters or something like that, then you need to scale them up so you can get that look.

I wish there were specific fonts already made for 3D printing that prevented you from making a lot of rookie mistakes if you haven’t done it before. We had to learn the hard way. I can see how there’s an opportunity for fonts like that, but I haven’t found anybody who specifically spent the time yet to make some good funds for that purpose.

We do them as we need them.

We do it and it’s a bit of a manual process but you can get it to print with quality, understanding these variables and planning ahead.

Good luck, Liam. I hope that helps you make better lettering and maybe you’re going to make your wife a nice monogrammed item on your 3D printer. I’m sure she’s anxious for you to make something successful on it.

Married men are spending a lot of money on printers. I understand that one. You, bachelors, out there are maybe like, “I’m making what I want.” Justifying the printer is never a bad thing, especially if that’s taking up space and making noise in your home.

Go to our Ask Us page and hit that SpeakPipe button and record your question. We’d love to hear from you on future episodes.