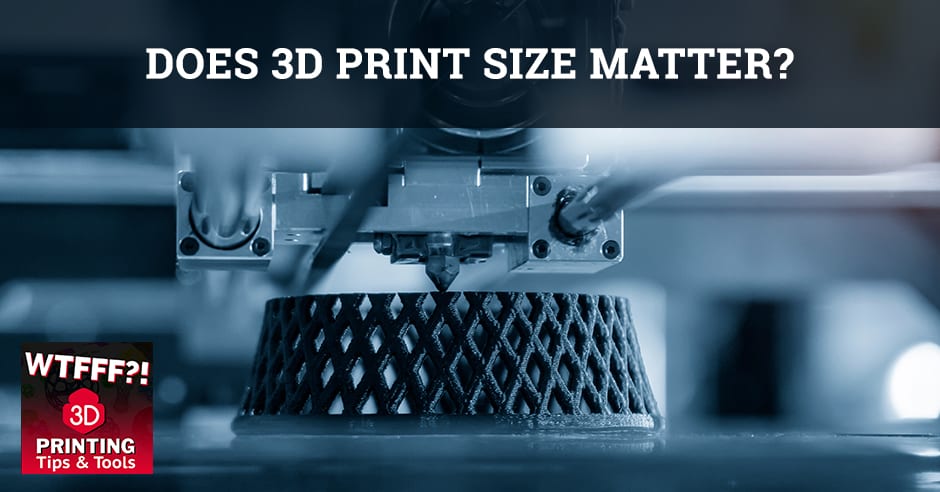 Should you buy the printer with the biggest build volume? Sometimes bigger is not always better, especially if it is your first printer. Tom and Tracy Hazzard share their thoughts on the matter of size and the factors that greatly affect your print quality. They tackle on what bigger prototypes can do and their capacities in producing larger volumes. Keep in mind, matching your needs to the kind of printer you use is very important.

Almost anything. Our question is interesting because we’ve already talked to somebody about this. It’s on our minds.

It’s a detailed question that we didn’t cover in that full episode.

The question is, “Should I buy a printer that has the biggest build volume? Should I go for it?”

We’ll try to address this quickly because this is our shorter Ask Us segment. It is a bigger issue about whether you should buy a printer on specs on paper alone. We’ve learned that lesson the hard way on other issues not only in size of build volume, that better by the specs are not always better for your application.

One hundred microns is not 100 microns across every printer. It can be by the technical but the resolution isn’t the same.

Let me put it this way. Even if a printer can achieve thinner layer thicknesses of 100 microns or 50 microns, that doesn’t necessarily mean that printer can produce better, finer quality prints overall because there is a lot more to it.

If you’re looking at buying a printer, unless what you want to and need to print requires or would be better being built as one build in a large print, I would not go for a bigger build volume, especially if it’s your first 3D printer.

If that’s what you’re doing, if you’re replacing prototype machinery that you make prototypes on and you make big prototypes, absolutely you should be looking at a big volume. For us, we’ve managed to maximize a small build volume.

We’ve created a design for a 3D printed necktie that I’ve worn out to a couple of events. We went to Makerspace, meetup and things like that.

A necktie, even the part that you see from your neck down is usually about 20 inches long or about 50 centimeters, the entire time going around your neck is about twice that. I don’t think there’s any printer on the market that could print that length of an object in one build.

There are some that do tall, but they’re usually not that wide.

I don’t even know if you could get a full meter in height.

There are some out there.

With the tie, we decided to change our approach. It partly informed how we designed it and it definitely informed how we put it on the build plate. We ended up making it have some interlocking parts that we’re able to rotate about each other. We turned it on its side and put it in a spiral configuration so we could fit that entire length of about one-meter long object on a MakerBot Fifth Generation standard build play.

There are a lot of ways for you to maximize a smaller build plate and how you layout your design and that’s one way. Another way is to make it into parts. A lot of people do that. There have been a lot of successful prints done that way. I’ve seen entire dresses built-out of interlocking parts.

In a relatively small build volume compared to the length of the dress or that clothing item.

There are ways around it. Also, Nervous System isn’t using an FFF printer, but they have been printing. They have an algorithm in which they fold an entire design in on itself and print it all in one piece and break it apart and open it. There’s a link to that video on our YouTube channel. It’s wonderful to see it come apart like that. That’s the Nervous System and they call that design process 4D. They do a great job of that as well. There are lots of things out there of other ways to use a smaller build volume and still manage to get good size parts out of that.

Especially if it’s your first one, don’t go too big. It’s not necessarily. You’re paying more than what you know how to use. Think about your what. Is it necessary for you to build it all in one piece and large? There are some good printers out there. There’s a whole printer comparison chart that I was turned on to and you can go there. It’s PrinterComparisonChart.com or something like that. It’s simple and you can go on there and you can pick the size as a criterion and see what printers match that need.

I’m still thinking that maybe one day it would be fun to have a big one.

Also, table legs and all sorts of prototypes and even working samples would be great.

We should test one out first. We should find a service bureau that has one and test it out and see the fine quality and the detail. Because of the way that they move, they don’t do fine details so well and the way that they move across the part if you were trying to create nooks and crannies and do things like that may not do it as well as they do a nice smooth movement of the head.

The bigger printers even though they’re capable of having small nozzle sizes tend to have larger diameter nozzles. Usually, they have a 0.50 millimeter to start, which is rather big for small fine detail work. If you’re doing a big print, that print is going to take many hours. If you’re building something that’s full height of that build volume, it could take 100 hours to print a part. In this scope of the industry and comparing to other processes is not that long, but in terms of starting print and getting finished, it’s a long time.

It breaks my heart though if we started a print and after a day of it going, it stops.

Maybe the power went out.

I could see that.

That would be ugly.

An alternative power source, you might have heard of that and you want to go for it. As it is for our tie, on its side and all of that took nineteen hours. The more complex you do, the more of these things. I can understand the knockout interlocking parts, little small pieces, and you can knock those out in relatively quick order and start assembling your products. Maybe printing it all in one piece is taking it longer. I don’t know but I don’t like to do the assembly.

The point is there are pros and cons. It depends on your what that you’re printing on your need. In some ways, maybe also the material you want to print it out of.

We hope we answered your question. If you have more questions like this, please feel free to ask us anything about anywhere. You can do it on Facebook, you can do it on our website but everywhere you find us we’re @HazzDesign.