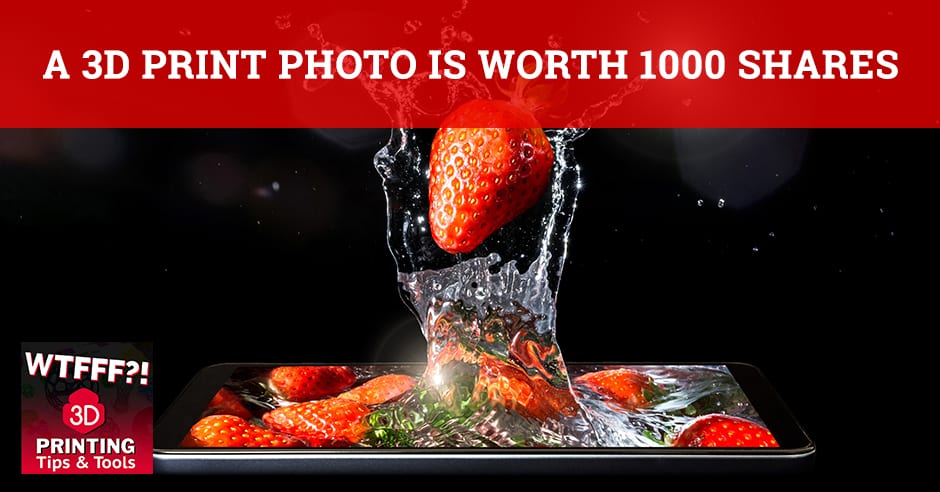 Do you remember the adage that goes, “A picture is worth a thousand words?” The same, and more, is true with photos printed using a 3D printer. In this episode, Tom and Tracy Hazzard discuss the value found in 3D print photos especially in this age of social media. Whenever you are marketing your 3D printer creations or just your 3D printer per se, it’s important to have quality photos. Take Tom and Tracy’s lead and successfully utilize sites like Facebook, Twitter, Instagram, and most especially, Pinterest.

It’s usually Ask Us Anything but in this episode it’s not a question.

It’s more of a statement. It’s about the value of 3D print pictures.

Share, likes, repost, I don’t know. We say a picture is worth 1,000 words. It’s worth money sometimes.

Even more than 1,000 of something when we talk about some examples here.

The thing is that you’ve got 140 characters to say something on Twitter. On Instagram, you’ve got a bunch of hashtags you can say something in. That picture or image resonates with people in such a compelling way.

It causes people to share or repost the image that you put up there more than anything else you might do rather than a statement you make.

I hate to say this, but I don’t re-share anything to you guys out there and our WTFFF?! audience unless I check the link first. I found that sometimes people post great images with the hope that you won’t ever check the link and the link is some sales lead generation crap. I want to make sure that we don’t do that. I always check through the link. I can tell you sometimes that those images and those links do not match.

Our experience has been that some of the images that get are the most re-shared and have most reach out there in social media are sometimes a failed print that went horribly wrong. It’s like this rat’s nest of plastic on the build plate.

Everybody shares it because they all understand. They have all been there, done that, seen that and they love it.

Everybody still loves a train wreck.

You never know what’s going to resonate. The quality of those pictures is critical and that’s one of the things we wanted to point out. If you’re taking pictures, take the time to frame that picture. Make it look great and intriguing.

There are others that are teaching us for free about posting images in social media and how powerful that can be. There was a great presentation that gave an example of both of those.

3D Print Photo: Some of the images that get most re-shared and have the most reach in social media are sometimes a failed print that went horribly wrong.

One of my favorite marketing people is Karen Leland. She’s amazing. She’s a brand expert, an absolute dynamo in branding. She talks about this example where she had a client called the Camiband which is a girl thing. Women probably know what it is already. It’s like a little lace. You wear it under your top and it’s got a little lace that shows through. They got an appearance on The Today Show and had 3,500 people visit their website.

She was like, “I made it on The Today Show. I’ve arrived. I’m on the map.” She got 3,500 people to visit her website and she thought that was a success from that media exposure.

Six weeks or within a couple of months later, her server crashed because she had 40,000 people visiting her from some Pinterest repost. She had been putting up images of the product and various things on Pinterest and someone reposted it.

Somebody who had a lot of reach saw it and shared it.

She ended up with her server crashing and 40,000 people viewing it. It was great sales in response to that as well.

This is a positive web crash, not a bad web crash.

You’re talking about Pinterest, how much did it cost her to put up a good image? It could be nothing. She could have taken that image herself and posted it up on her own. It was on her own Pinterest page. It wasn’t even like she had pushed it out to anyone. Somebody had picked it up and found it because it was tagged right and everything was done right. That is showing you the power of getting the right image because that image speaks strongly. You have to look at that and say, “I’ve got to rethink my images.”

Maybe even rethink your marketing strategy. It seems it is much easier to reach a much wider audience via social media marketing that doesn’t have to cost much versus traditional media marketing. It’s why television is having trouble being relevant in this modern world. Thank goodness DVRs came along or else, I don’t know that any of us would be watching television anymore. We can watch it on our time. That’s why I like other social media outlets more so than Twitter because it passes in time. If you don’t see it when it goes out there right then, you miss it.

Back to your original example of where you’re saying this guy was trying to sell an $8,000 program on how to get yourself and your product on TV. I took what was probably an $80 per segment class on social media and I took four of them. It was about that cost, under $100. That has been more powerful and useful in our business than I would think that the television would ever be.

While it might stroke your ego a lot to be on television, this was not like commercials or anything, this is about how to market yourself to local TV stations for local news, to be an expert and be interviewed about something. Certainly, 3D printing is such a hot topic. We were being told, “You would kill it because you’re current. Everybody wants to know about it.” I’ll say, “Maybe I could but how much is it going to do for me?” It’s a bit of an old school marketing approach in a new school world. The Millennials are not watching The Today Show.

You have to think that there are lots of audience with the changeover of Daily Show and The Colbert Report. All these things have all shifted and changed. A lot of them are moving to either a more Millennial-focused audience or they’re shifting another audience into us aging Gen Xers. You see this whole shift happens. You have to think about where your audience is going as well. From our podcast perspective and in understanding where the 3D print community is and where we’ve organically grown, we’ve organically grown in non-traditional media.

How does this apply to our followers and other people who are interested in the 3D print economy and businesses or hobbies? If you’re involved in 3D printing and doing things, you have great things to take pictures of.

Pictures and we also talked about time-lapse videos. You have great content that is yours. You can create for almost no money and post on social media and get a lot of attention for it, whether it’s for your business, your Shapeways shop, your school, your club, your makerspace, your fab lab, or your future event. Take advantage of that. Don’t underestimate the possibilities and the return you can get for a relatively low effort.

Even if you haven’t started that business yet. This is something that we did. We mentioned when we were talking about how we started our podcast and our resolutions about that and everything. We talked about it and when we started researching in October 2014 for what we were going to do, we also started our social media program. We also started tweeting, instagramming images, doing things with 3D printed items and growing our 3D print community of people we were talking with, without promoting anything. We were just connecting.

3D Print Photo: Modern social media marketing is something that you need to go to school on, be involved in, have a presence, and be engaged.

We’re engaging in a conversation.

We built up the Twitter following that was over 500 at the time without ever selling anything or doing anything in 3D printing besides doing it ourselves. We’ve built up our Instagram community and things like that. That’s an important consideration just thinking about it. Even if you’re dabbling now but you think you might want to take it more seriously in the future. Build your following now.

I haven’t checked the stats. Our Pinterest boards were our biggest followed boards. I started using it early on when Pinterest was new. I was one of the early adapters to Pinterest. I was using it for our clients at the time. I would create these boards that had comments about color or create boards about whatever the topic was. We have the gigantic office chair Pinterest board. Imagine we’ve got thousands of pins in it because I’ve been building it up over time. They were examples of things that were out there. Anytime something office chairs showed up, I pinned it on the board. I became a collector in a sense of those things and they were relevant to my clients and they were relevant to us in terms of what we wanted to keep an eye on and watch and maybe inspire us to create a different design in the future. I was using it for fun.

It turns out, when I went to look at it from a business perspective, we had 10,000 views a month and things like that. We had pins that had been re-shared and reposted thousands of times. It was crazy numbers compared to our other social media and I hadn’t ever put any effort into it. We continue to do that. We have a 3D print board and we post stuff. If people send them to me, I try to post them up on Pinterest as well. It’s a great way for people to trust you as a collector of something interesting.

Don’t underestimate the power of some of these different social media platforms. Not all of them may be perfect for you or your particular business. It’s also hard as an individual. If you’re a solopreneur starting a business, it can be hard to be on top of all these different things.

You don’t have to do all of them. Do one at a time. Grow one at a time. I don’t want to scare you. If you’re heavy and you take beautiful pictures, you don’t want to deal with the posting part, the writing part isn’t your thing, try Instagram and Pinterest. Try those two.

As your business grows, you can get an assistant at some point when you can afford it to help manage some of the other social media outlets.

There are many ways you can do this. There are also some programs to help you manage it and time the posting of things. Modern social media marketing is something, especially if you’re involved in the 3D print industry. It’s something that you need to go to school on and be involved in and have a presence and be engaged. You’re going to find that is effective among some of the other things you’ll do to market your business.

It all starts with an image, a picture.

If you want to send us an email it’s Info@3DStartPoint.com. Either Tracy or I will answer that one directly.

Thanks again for following.