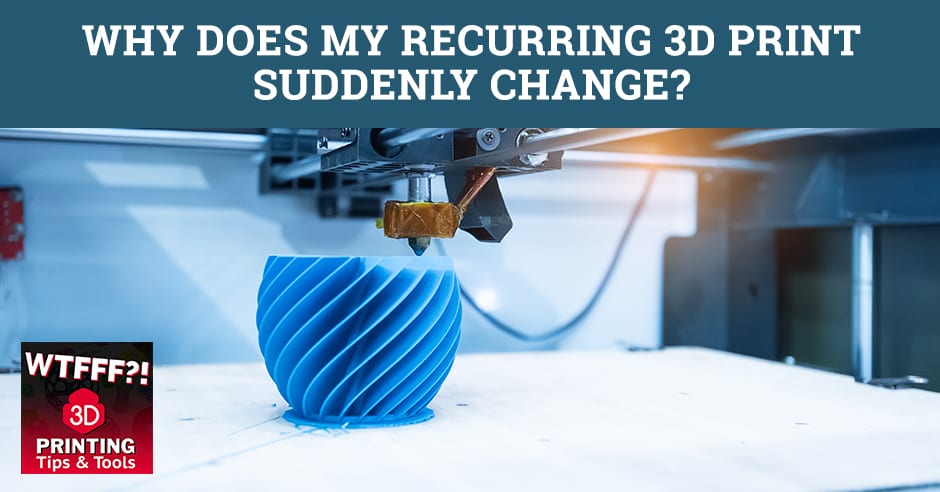 If you have been in this industry long enough, you’ll find that problems in your 3D printing process could arise even when you’ve done it numerous times already. In this episode, Tom Hazzard and Tracy Hazzard answer this familiar question: “Why does my recurring 3D print suddenly change?” Just when everything else seems to be working, you suddenly find an odd one from the pile. They take you through a number of scenarios that may have been the cause of your sudden 3D print problems. Join Tom and Tracy in this episode to learn how to solve them and more.

Why Does My Recurring 3D Print Suddenly Change?

We’ve got a good practical question that’s coming from a listener who prints the same type of objects over and over again. It’s like when we print our 3D ties. We designed that years ago and we printed different materials. Sometimes we print over and over again, and the question is, “Why is the part I have printed regularly and successfully over a long period of time all of a sudden have problems when I go and print it?”

That always surprises me. Sometimes we’ll get a print off the printer and there are little gaps and holes and things and I’m like, “We’d only printed this.” Everything else seems to be working but all of a sudden, there’s a problem.

Maybe something doesn’t form properly. It usually prints layer by layer, no problem and you have a problem in the middle and everything after that is messed up. There are several reasons why this can happen. I’m going to run through the three most typical reasons this can happen. Number one is probably going to be a little obvious to some of you, but it bears reminding and that is material. If you’re using a new spool of filament from a new manufacturer or even it’s a different color from someone that you trust.

We found even an old one that used to work great, but it’s been sitting there a while and you haven’t gone back to that color. Sometimes it’s almost like it aged.

Material is the number one potential suspect problem. If you get a fresh bowl of filament, or sometimes if you need to use a new color that’s from a new source or even from a trusted source, a new color can have different temperature needs in terms of where it’s going to print the best. You need to consider that and you need to do some experimentation. Let’s say that the same color is used over and over again, I would try a fresh spool of filament and try to rule that out before I start going and changing anything else.

It’s the easiest thing to do and the fastest thing you can do to try to fix a problem like that. Let’s say you are using the same consistent filament and you printed a previous object off that same spool and it worked out well. You printed a new one and it didn’t work. Let’s go into the second reason, the most common reason that you can experience. A sudden change in the reliability of the part if you don’t have success. That can be a firmware update. I’ve had this happen with me on a couple of different printers both in a positive way and in a negative way.

For instance, one 3D printer manufacturer updated its firmware and now it’s telling you, “You need to update the firmware. You need to be using the latest and greatest.” That’s true, but they sometimes change a setting there. In this example, one of them changed something in the behavior of the machine when it changes from one layer to the next. What ended up happening because it’s the specific code they had in there, the slicing software I was using at the time, Cura, interpreted that as, “We’re going to change the height of each layer.” It made it thicker than that should have all of a sudden.

When you printed the whole part, it started to get to the point where the part was growing in size much larger than it should. What was also happening is each layer was further apart from each other and they weren’t sticking together after a while. It was inflating the height of the part and I had done nothing. I was using the same exact G-code and sliced file I had been using that I knew worked well. It took some trial and error and getting some support from the company to find out what the problem was. Here was a problem, it was an open-source printer where the manufacturer says, “Maybe it’s the slicing software’s fault.” The slicing software would say, “I’d check with the firmware. There’s a problem there.” It’s a bit of a mystery and a detective operation to figure out what’s going on.

Rule of thumb, anytime you update something, suspect that first.

I would suspect that first. If you ask the right questions and take photos of what you’re printing, what’s not working and send it in, they usually can help you figure that out and fix it.

Material is the number one potential suspect problem for your sudden 3D print change. Click To Tweet

We also try hard not to update multiple things at the same time. When we update firmware, we don’t update software at the same time. We do one and the other because you don’t want to have different variables. That’s why we save the material. You don’t want to change your firmware, software, and material. You would never want to do that because it takes you so much longer to isolate the problem.

You have to do a process of elimination. Think about that as you’re going through these problems. The second one was firmware. That’s a machine issue. The third one is slicing software updates. This doesn’t matter if it’s an open or closed source printer. The firmware that’s probably true of that as well but the thing about slicing software, they’re always trying to make improvements to it. If you have an older G-code file you sliced months ago and they make an update to their slicing software, you can find that updates the slicing software meant sometimes to work with updates to firmware on the computer.

These go hand in hand. You can have an old G-code that doesn’t work anymore and if you find that if you slice it new that it can take care of that problem. At the same time, I found, for instance, on our MakerBot printer that this wasn’t a problem but it was a difference that the same model sliced with the same settings a year ago compared to it now, a year ago it printed faster and now it prints slower.

What they’ve done is they’ve tried to make improvements in quality, but then that becomes a problem in productivity, potentially taking longer to print. That can be hard to find out, “Do I have to live with that? Is that okay?” You can find that sometimes updates in software and firmware if they’re not done together, they don’t work well and can cause you problems. You’re using that old G-code and it’s not necessarily compatible. You can always save the old G-code for sure.

You can also slice and create a new G-code of the same thing. Sometimes it’s to your advantage. I guess that’s the last tip. Even though you have an old model, it may make sense to you if it’s several months old or half a year old or even more to reslice it with the latest settings and both software and firmware and you may get better results. Those are some of my best tips. Do you have anything else to suggest, Tracy?

No, but only a recap of material firmware slicing. Check all of those things for change updates and I would do it in that order. That makes the most sense. Unless for sure you updated firmware and software. Sometimes it’s a little more invisible to you on certain printers. You don’t always know if you investigate a little further. I hope you like this. We’ve rolled out a little change. This is Tech Tuesday. We’re trying to do a little more advanced tech topic.

We’ve been getting a lot of those questions from you guys so we thought we would try to roll that in on a more regular basis that Tuesdays we would cover a topic that might be a little bit more advanced or a little bit more technical. On Fridays, we’re going to try something a little more design and art. That’s our goal and how we’re going to start working things out, talk about more of the design and content side of things on Fridays. Inspiration for those that are weekend printers. We’re going to do some of those things. These are all plans that we’ve had for the new year so we’re trying to get them all rolled out and in action now.

It’s amazing how long it takes to implement certain things, but also because we record a bit ahead.

We had to catch up to it. Let us know what you think of that and especially if you have more tech questions, we’d love to hear them in. You can find us anywhere on social media at @HazzDesign.

You come to 3DStartPoint.com and our website is continuing to improve and have more resources and get a little more robust.

It has a lot more blog posts.

3D Print Sudden Change: Rule of thumb, anytime you update something with your 3D print, suspect the firmware first.

Also tips and tools. They’re great subjects to read on that you will not hear on the podcast. We’re putting more new subjects up there that we don’t have time to cover every day here.

We’re rolling out a calendar and a directory that will happen.

A calendar of events of all kinds of events and probably some in your area. We will have a directory of resources for all things 3D printing related.

If you want to be added to either of those, make sure to send us a message at Info@3DStartPoint.com.

Thanks for reading, everybody.