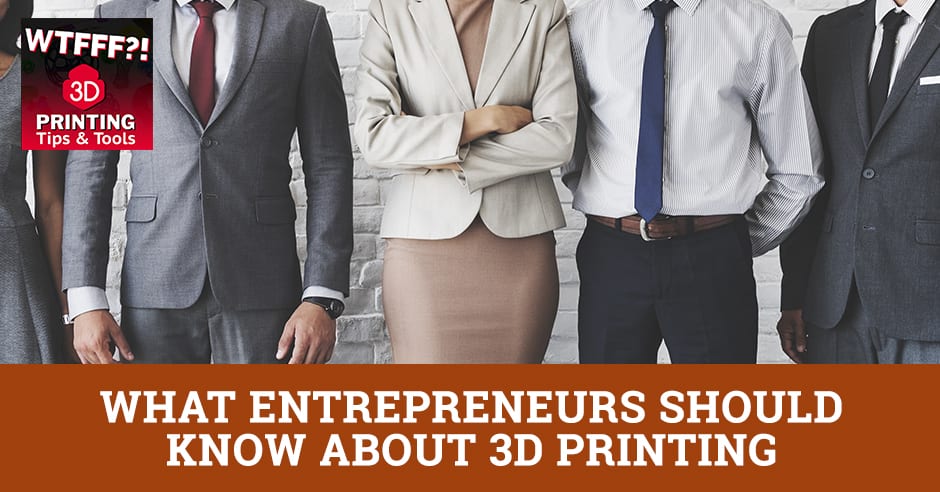 As in any other venture, being an entrepreneur in the 3D printing industry is all about balancing between opportunity and risk. As an entrepreneur, what are the things you should know about 3D printing? Could this be your next investment? Tom Hazzard and Tracy Hazzard answer these questions in this segment. Learn about the unique advantages of 3D printing advantages in terms of cost-efficiency, market viability and unique propositions and why it is an investment you might want to dive into.

What Entrepreneurs Should Know About 3D Printing

Kudos to that entrepreneur for asking. Every entrepreneur involved in business that in any way is going to have to do with physical things should be learning about and considering 3D printing.

Let’s make an assumption here because most entrepreneurs are serial entrepreneurs. Meaning, they startup businesses over and over again or they start them up, they get to a stage and say, “I’m not that one,” and they start on a new idea. I hear that all the time because we’ve been going to a lot of entrepreneur events. With that in mind, the number one thing you should know is that 3D printing is a cost saver. It is the number one way to preserve your capital, one of the most killers in any entrepreneurial venture that makes a product. It’s different when you’re doing a service or software or something like that, but anytime you’re making a product, the most killer cost will be an investment in tooling, development time, testing and all of those things.

It was the biggest cost of starting up our business in 1998, ttools. That was built around a precision writing instrument for handheld computers.

$60,000 which is a ridiculous amount, but that’s how much we had in our capital reserve when we started that business. That was for tooling and all the things to produce the first run and it’s a pen. It’s little. It’s a huge amount of money. We didn’t have much more money beyond that.

We were bootstrapping it for sure.

If we could have preserved some of that capital?

With what we learned in the previous podcast episode, think of the metal version of that pen we made.

We could’ve sold each pen at a loss until we proved out we had a big enough market and still spent less money. That’s the number one lesson entrepreneurs should know about 3D printing. This is the number one reason why you should consider it. We keep saying that again and again. You should absolutely know about it. The number two and the most important thing an entrepreneur can do when making a product is to test the market. If there’s no market viability, that’s the biggest mistake. You think you have the idea.

Everybody thinks their idea is better than everybody else is.

They think they’re the next Spanx, the next best thing to sliced bread. It’s crazy how insane you guys get about your ideas. I’m sure some of you have a great idea out there but prove it. Test its market viability. The best way to test market viability is by going out there and selling it because you’d be surprised at the things. We say there are a lot of people who need a lot of runways out there. They need a lot of time to get used to something new.

It takes a lot of runways before they can take off. It’s like sink or swim, fly or crash. The reality is, you should be putting a product out there and testing it and not only to test the market viability but testing it before you commit tooling dollars. Even if you’re going to have manufacturing at some point, you may need to make a change. You can put it out there. Make it a dozen different ways over the course of several months and prove out and discover what the best form or function is for your problem.

What appeals most to your market is another thing. They talk about A/B testing and advertising and website design all the time. The audience seems to prefer A style or B style or A message or B message. It’s the same thing here. With 3D printing, you can make those multiples and go out and do A/B testing on your product style as well. You can dial in. What’s the best color? What’s the best feature? What’s the best message?

Nobody should be doing it the old way and making a big bet and pouring a huge amount of dollars into hard tooling of something before market testing it. There’s no reason.

There are many reasons why you don’t want to do that. We don’t have time for that now. We’ve been there and we’ve done it. We had a great product and a great idea. We had patents on it and it was accepted by the market tremendously. We still risked everything and our families and faced great adversity for other reasons, having to do with competition and things like this.

2001 happened so you have 9/11. You have all this stuff happening to you that is out of your control and the last thing you want is to spend every dime of that capital when you might need it to flex and go some other different direction.

Pivot and survive, weather some storm that’s going to come your way.

The last thing is something that we had on the previous podcast. When you are making something in a new way, you have new possibilities for features and functions. We always say that you must have a unique proposition if you’re going to be a startup. If you’re going to be an entrepreneur and you’re going to enter a market that whether it’s crowded or not, it doesn’t matter. When you have to take the time to bring brand awareness and product awareness, it takes long. The fastest way to do that is to have a unique proposition.

A new way of making something, a new style, all of those things are great not only from a marketing standpoint, but you can also say, “This is 3D printed.” Who doesn’t want to write about 3D printing in the press? I hear it everywhere. That’s good from a marketing perspective, but it’s also good from a style perspective. It’s giving new design, new life, new functionality that other people can’t achieve if they’re already invested in this heavy bit of machinery that’s old fashioned.

That was exciting with the previous interview on the podcast. ADIRA manufacturing is seeing this every day in their business because they have this technology with this powder sintered metal 3D printing. They have customers coming to them that are figuring out new ways to accomplish things because the old manufacturing constraints are not holding them back. They’ve thought about it differently and they’re coming up with that unique value proposition.

Those are three reasons why. Preserve your capital, have great new design ideas, unique propositions, and test your market viability. These are great reasons. I could probably think of a dozen more for you if I had the time. Those are the three most important reasons why every entrepreneur should absolutely consider 3D printing.

Thank you for that question. We got to talk about a slight difference that’s going to happen in our podcast. We’re getting out of the studio more. We’ve got some local trade shows in Southern California where we’re getting out and trying to reach more readers in person.

3D Printing Entrepreneurship | 3D printing technology saves you from the risk of spending tooling dollars in the wrong business.

We’re doing some podcast intercepts. We’re going to be onsite podcasters. It’s going to be fun.

We’re going to find a lot of new relevant content that will be easy to capture and put out there for you.

We will be at the 3D Print Show California. We will be live-tweeting and doing some other things from there. You might want to check all of that out.

Stay tuned to our social media for real-time news from that event.

We’re still going to have our regular weekly episode with a good, relevant interview on Thursdays. We have a couple of 3D printer reviews that we’ve been testing and writing on. You’re going to want to catch that. You won’t have the everyday Ask Us for a little while, but there will be lots of great content. Thank you for being loyal readers.

Thank you for 100 episodes.

It’s exciting to have reached that level.

We’re excited to bring you much more content going forward.

Lots of big news coming on that. Come back to a future episode. We’ll talk more about that.