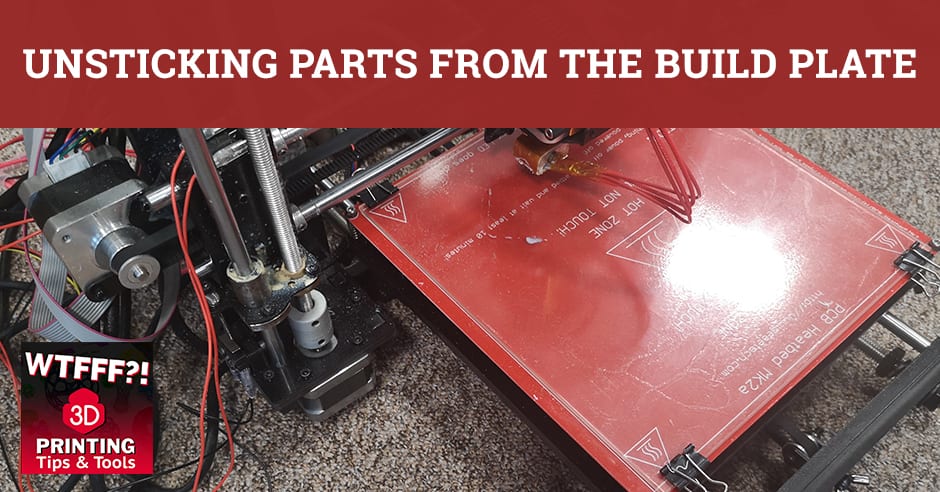 After doing such a great job of getting our parts to stick to the build plate, we sometimes end up making it difficult to remove the part without damaging it. In this episode, Tom and Tracy Hazzard share their tips for unsticking build plate parts. They share the tools that they use to remove these parts with precision and explain the common problems they went through while handling each of the parts. Listen to their advice and get those plates to unstick successfully!

Unsticking Parts From The Build Plate

The anything in this episode is a little more technical than we sometimes delve into. It’s more around tools and accessories. The question is, how do you get it off the build plate?

That’s something that they certainly don’t talk about much when you’re shopping for a 3D printer.

It is a bit of a contradiction but it is true. It’s a reality.

You have two problems. Sometimes you have delicate parts you don’t want to break and sometimes you have parts that are thick and broad. It’s hard to get that whole thing to come off in one piece without breaking in half.

I was printing a large flat piece that looked like the shape of a hockey rink. It was a quadcopter motor mount for a friend. I don’t get into that stuff myself but somebody asked me to print it for them and I did. This thing was not even a half an inch thick, but it was wide as probably 10 or 12 inches long and six inches wide. It was big and it was stuck to that build plate pretty hard. New users tend to peel up the tape or if they’re using tape on their build plate, peel it up and destroy it and pull it off the bottom to remove the part. There’s a cost to that tape and I like to reuse mine for a number of prints.

It’s a pain to re-adhere tape and get it all on right every time. Every time you touch the build plate more and you do all more of that, you have risked the calibrations.

Let’s say if you’re printing ABS and you’re using one of those little brush on adhesives or the glue stick to get your ABS to stick. You remove the build plate from the printer where you can remove the build plate and you wash it to get that off, but that’s pretty complicated. I’d rather remove my part as it’s in the machine on the build plate and take it to what I need to do with it. We’ve modified an existing tool out there and I’ve created a large spatula that has a sharp edge on it. You put it flat on the build plate and push it right under. We have some photos of this which will be on our website at HazzDesign.com where you can see that. We have a tool that we can slide under it and carefully peel up any part without breaking it.

Unsticking Build Plate Parts: Every time you touch the built plate, you put the calibrations at risk.

I’ve got the handle at a special angle and I’ve sharpened it extra amount because I knew there’s not much space to get under these prints.

Originally, we were using what I call a fish spatula. If you cook, you know what that is. It’s a thin spatula that’s for delicate fish, which is analogous to doing delicate parts but it’s not pointy at the tip. If you’re not using a raft, you can damage it that way. You have to be a little careful about what you’re doing in terms of that. A raft gives you a little bit more leeway in terms of being able to get something off so that helps too.

Even with a raft, sometimes parts are thin and wide enough on the build plate for her to remove by hand. This type of a sharp edge spatula, the sharper the better because it gets right under it. I’ve found over time with that tool, I don’t damage the Blue Tape that we use on the surface of our build plate so I can reuse that tape easily a dozen times or more without having to replace it.

It saves us a lot of time. Another thing is we have tried those stickers that some manufacturers recommend where you put down a little sticker and you peel up the sticker and peel the sticker off at the bottom but we have a lot of trouble with those.

I tried them to give them a fair shake but I found that the surface of that sticker is marred or damaged more easily than the Blue Tape. When I pull that sticker off my build plate it leaves a tremendous amount of a haze of residue that I had to use Windex and spend some time cleaning.

It was uneven and made your next print uneven.

The great thing about these Blue Tapes and even the Red Tape out there for ABS is you can pull it off the build plate and you’re ready to go to put a new piece on. You don’t lose a lot of time in cleanup.

We hope that answers your question and you can check out our YouTube video that’s our channel, @HazzDesign and it’s the same across any social media platform. You can go there and you can see our tool and action. You can also go to our website and our blog HazzDesign.com. You can check out some images and things like that as well so you can see what we’re doing and if you want to get in touch with us and have a question for us next time.

Please go to our website and we have an Ask Us tab where you can go and click a button. You can use your phone or use a computer with a microphone. You can ask any question you like and we’ll be happy to answer your questions.

You can also leave us a voicemail on Facebook. That’s another way to do it. Thanks again.