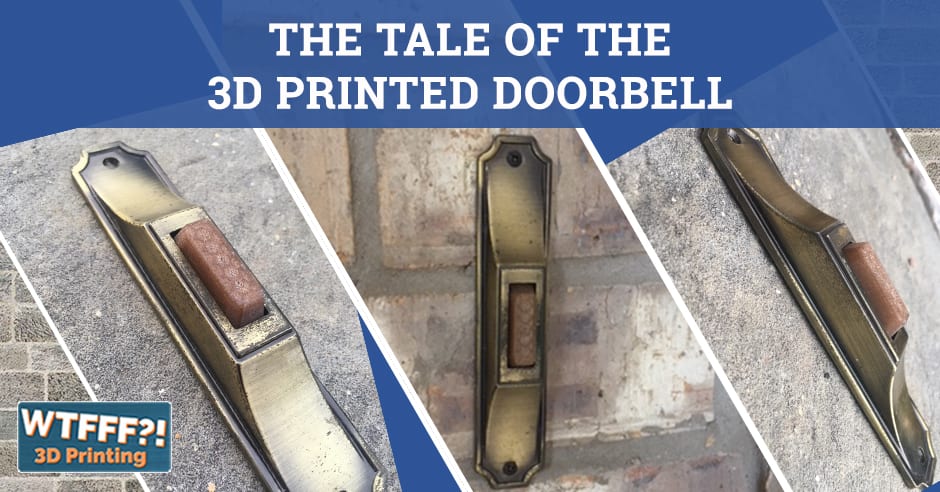 One of the things they don’t tell you about being a first time homeowner is the number of security system salesmen that drop by immediately after you sign your paycheck away to a 15 or 30-year mortgage. This is the tale of a homeowner on the first day in their new home. Not being the type of person who answers the door when she’s not expecting visitors, the new resident answered the doorbell to a salesman wanting to check out the home alarm system and see what upgrades he could bring to the security set up. After being turned away, the salesman returned 30 minutes later and rang the doorbell incessantly, leaving the plastic doorbell button damaged. Well they don’t make doorbells like they used to, so they thought it’s the perfect job for a 3D printer. Learn about one homeowner’s futile journey of searching for the perfect doorbell from all the usual stores and finally finding the solution by recreating the doorbell button with the aid of 3D printing.

The Tale of the 3D Printed Doorbell

One of the things they don’t tell you about being a first time homeowner is the number of security system salesmen that drop by immediately after you sign your paycheck away to a 15 or 30-year mortgage. I normally am not the type of person who answers the door when I’m not expecting visitors, especially when I’m home alone. However, it was the first day in our new home and I was excited to hear the doorbell ring while I was unpacking boxes and getting settled in.

Unfortunately, it was not a friendly new neighbor bringing over a tray of cookies to introduce themselves like I was hoping it would be. It was a salesman wanting to check out our home alarm system and see what upgrades he could bring to our security set up. I am definitely not the type to let strange men into my house when I’m alone and let them know all the details about the security alarm system we may or may not have, so I turned him away saying my husband would be home any minute. He could leave a pamphlet if he wanted to (he had none – red flag!) and we’d look over it and discuss it when he got in.

This individual came back to the house about 30 minutes later, expecting me and my husband, Brandon, to both be home and ready to talk alarm systems. The trouble is I had told this guy a white lie. I had no idea when Brandon would be back but I didn’t want any strange man in my house when I was alone! He rang the doorbell several times and eventually left after getting no answer. Only when Brandon got home did we notice that the plastic doorbell button was damaged, probably from the aggressive doorbell ringing by the salesman. I guess he was upset, but better safe than sorry!

Here’s the thing, our house was built seventeen years ago in 2001. The doorbell unit is nice. It does its job but it’s obviously builder grade as everyone in our neighborhood has the same setup.  It has now become clear to me: they just don’t make doorbells like they used to!

As new homeowners, you spend a lot of time going to the usual spots: Home Depot, Lowe’s, Ace Hardware. We had other home projects to tackle before we took on this doorbell, so whenever I happened into one of these stores, I checked out their doorbell selection. Between the three stores, there were only about eight different doorbell units on the shelves, and all of them not long enough to cover the 5-inch gap where the original doorbell was screwed into the brick. I figured it was just easier to find a large enough unit to cover the holes than get a smaller one and figure out how to patch the brick. In a semi-desperate attempt, I did get a store-bought unit to try to swap out the rectangular plastic part; it wasn’t a good fit.

This project was drawn out over two years. I wasn’t seriously looking to fix the doorbell button. A piece of masking tape sufficed as our place holder while we addressed the other home projects. The piece of tape solved our issue until trick-or-treat season in 2017, and it became time to get serious about fixing the broken button.

You’d think that you could find anything online between Amazon and Google by now. The only problem is what if they just don’t make what you need? I gave up the idea of buying a new doorbell when I came across a forum post of an individual with my same doorbell and the same problem. The end result, they got a smaller unit and had holes in their brick. I could not live with holes exposed or a patch job.

All this time, I knew deep down this was the perfect job for a 3D printer. Even though you could say I worked in “the biz” from a marketing standpoint, I was hesitant to get the doorbell button 3D-printed. To this day, I don’t know why it took me so long to pull the trigger on this. I think I only wanted to have Tom and Tracy for this job since I knew they were design experts, plus they had the right tools and materials. It’s like when I moved and had to get a new chiropractor. I knew who the best was and was hesitant to place my trust into the hands of someone else (shout-out to Precision Chiropractic!).

In the end, after my internet searching and brick-and-mortar shopping skills had failed me, I fired up a Google search for “3D print companies near me.” I opted for the company closest to me, about a 40-minute drive. They didn’t have an official website but did have a Facebook page that showcased some of their print jobs and had fairly decent posting activity. They seemed legit so I reached out via Facebook Messenger and he instantly replied, saying he could do it in one to three days for about $10. SOLD!

I was a little bit surprised when I arrived to drop off my entire doorbell unit to someone’s home. I was expecting it to be a little storefront. No matter, it was clearly a side gig (judging by the t-shirt he wore to open the door, he was a STEM teacher at a local highschool). In an ironic twist, his own doorbell button was suffering the same fate as mine! I wish I snapped a pic. He should probably address that before his next broken doorbell customer contacts him. J

He contacted me on Facebook two days later saying the final print was ready for pick-up. After two years of procrastinating on getting this fixed, I was so excited that once I finally decided to get the button 3D-printed, it didn’t take long at all for it to be done. I headed over after work to that side of town, but he was running late and he had to leave to meet someone for dinner so we decided to use the honor system. He’d leave the doorbell on his porch and I’d leave the cash under the mat.

It wasn’t what I was expecting. Don’t be like me and forget to convey your expectations of the final product because you are simply excited to get the job done. When I picked up the piece, I realized we never talked about what color I’d like the button to be. To say the least, I wasn’t expecting brown. I did have a slight warning of the color choice. As I was on my way to pick it up, he messaged me on Facebook saying that he went with a coffee filament because he and his girlfriend thought the end result looked good with the bronze color of the doorbell unit.

The color he went with does look fine, but I still would have preferred white or off white, or whatever color the original one was. I realized we didn’t talk filament colors. I assumed (something you should never do) that because the pieces of the original plastic still in the unit were white, he would see that and go with white. It also is either a really thick print or the filament is too dark, making the light from the doorbell unit not show through at night like it used to.

In retrospect, if we are changing things up, I also would change the look of button’s surface so it wouldn’t look so much like the underside of a Lego, but that’s just me! I know you can’t get a totally smooth surface with 3D printing, there will be some striation lines, but the round circles throw me off.At the end of the day, I’m just glad it fits and works.

Overall, I’m just glad it’s fixed and it was cheap. Large size doorbell units that would come close to covering the 5-inch screw holes are about $40 and up. The button works when pressed. Now I don’t have to worry about exposed wires or the liability of someone getting electrocuted (if that’s even possible) when ringing the bell. He also threw in fixing the back plate (the clear plastic piece in photo). It apparently broke trying to remove the front plastic button piece. I thought that was a nice touch from a business perspective!

This is the person I contacted. He doesn’t know I don’t 100% love the piece, but he did a good job with a nice price, quick turnaround, and fast respond rate. Plus at the end of the day, it’s just a doorbell and I 90% love the new button!