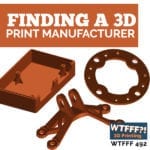 We got an interesting episode today. We've got a guest who’s been on before, Jason Ray. It was December 2016 for something called Sightline Maps, which we loved the project because we think it’s really cool, topographically three-dimensionally mapping for government use, for school uses. The idea was that you would topographically print them on 3D printers so schools would learn what the stuff look like. He’s come back to use because he’s working on a new venture. It’s called Paperless Parts. It … END_OF_DOCUMENT_TOKEN_TO_BE_REPLACED