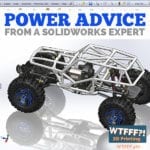 We had a listener communicate with us over Facebook recently and leave what was the longest comment we’ve ever had to a post. It wasn’t just the longest, it was the most detailed and informational I've ever read on Facebook. This was in response to our recent episode sometime last month about 3D printed surface textures. Her name is Jen Davis-Wilson, who we actually realized we have a lot in common with once we talked to her. Our paths have crossed maybe in the late ‘90s and early 2000s, … END_OF_DOCUMENT_TOKEN_TO_BE_REPLACED