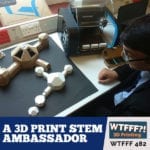 I have a great interview with Grant Mackenzie. He is the sales manager for CEL who does what I've referred to in the past as the CEL Robox 3D Printer. Those of you that have listened to Tracy and I for a long time know that we saw their CEL Robox 3D Printer at CES in 2016. That's more than eighteen months ago, January of 2016. We were very impressed with this 3D printer. We had arranged and we're told originally we were going to get a review unit. For one reason or another, just the … END_OF_DOCUMENT_TOKEN_TO_BE_REPLACED