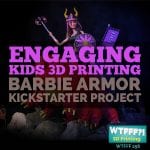 Engaging kids in 3D printing can be educational and will open their eyes to modern creativity. In this Wild Card Wednesday episode, Tom and Tracy Hazzard talk about a project that is allowing kids to interact with 3D printing. A guy that goes by Zheng 3 did a Kickstarter project in 2014 called the Kickstarter Faire Play. The project is around creating what they call Barbie Armor, inspired by the medieval dress role play in England called the Renaissance fair. Be amazed by … END_OF_DOCUMENT_TOKEN_TO_BE_REPLACED