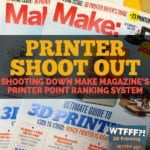 In this episode, Tom and Tracy Hazzard talk about Make Magazine’s Printer Shootout and their point ranking system. A lot of people use this as a factor in choosing which 3D printer to buy, and it sometimes is misleading and can lead to a lot of frustration. Their ranking system is too tight and doesn't necessarily accurately show what users need, at least not consistently. Listen to the podcast here: Printer ShootOut - Shooting Down Make Magazine's Printer Point Ranking System   We’re … END_OF_DOCUMENT_TOKEN_TO_BE_REPLACED

With over 900 3D printers out in the market, choosing one that will suit your needs can be a nightmare for anyone. In this episode, Tom and Tracy Hazzard talk about the 3D printer overload and a 3D print market desperately trying to cope up where the business is. Get to know their take on the number of players in the market and why most newcomers lose traction in product specification and quality. Tom and Tracy also share their tactics - from running and testing to going to 3D hubs and … END_OF_DOCUMENT_TOKEN_TO_BE_REPLACED

Most 3D printers would accept any filament of the right diameter, but a few require a proprietary cartridge system that prevents you from using any filament other than theirs. Where should you draw the line when it comes to proprietary filaments? Should you avoid buying printers that require them? For Tom Hazzard and Tracy Hazzard, the answer is yes and no (but definitely, yes) – depending on what you’re using your printer for. Tune in for more. --- Listen to the podcast … END_OF_DOCUMENT_TOKEN_TO_BE_REPLACED

Choosing a 3D printing to buy is a problem most 3D printing newbies are faced with. On today’s show, Tom and Tracy Hazzard address this dilemma. They believe that the selection process mainly depends on the quality you want, the size, and even the designs you need. Join Tom and Tracy as they share some key tips on selecting the best 3D printer. --- Listen to the podcast here: How Should I Choose A 3D Printer? Our question is general. It is general but it's a good question. … END_OF_DOCUMENT_TOKEN_TO_BE_REPLACED