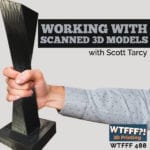 I've got a great interview with Scott Tarcy of CAD Design Help. Scott has been on the podcast once before and it was just a general discussion about his company and what he does in the 3D printing industry in general. However this time, I've got a really interesting interview regarding something that we've been talking about on and off in some episodes here on WTFFF recently but from a different perspective. In the last couple of months, we've had two episodes on scanning of 3D objects. One … END_OF_DOCUMENT_TOKEN_TO_BE_REPLACED

We had a listener communicate with us over Facebook recently and leave what was the longest comment we’ve ever had to a post. It wasn’t just the longest, it was the most detailed and informational I've ever read on Facebook. This was in response to our recent episode sometime last month about 3D printed surface textures. Her name is Jen Davis-Wilson, who we actually realized we have a lot in common with once we talked to her. Our paths have crossed maybe in the late ‘90s and early 2000s, … END_OF_DOCUMENT_TOKEN_TO_BE_REPLACED

We have an interview today with Scott Tarcy of CAD Design Help. I love that we’re going to bring in somebody else who has a different CAD design view. Somebody else really who is trying to do something similar that we are in helping to be a resource for people interested in 3D printing in one way or another. His focus is a little more in the CAD side of things. It’s a bit of a cross section. He’s more of an engineer, actually is a degreed engineer, a mechanical engineer. He has worked inside a … END_OF_DOCUMENT_TOKEN_TO_BE_REPLACED