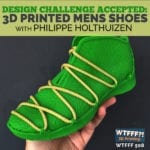 For some people, seven months of product design is barely enough time to build a single feature. But Dutch product designer Philippe Holthuizen managed to disrupt the footwear industry with his 3D printed mens shoes in that time frame. Phillippe was able to achieve a lot in design and development from styles to texture using his 3D CAD skills and background in shoe designing. But his bottom line goal is pretty much the same as other 3D print product designers; to become part of the … END_OF_DOCUMENT_TOKEN_TO_BE_REPLACED