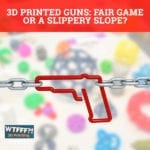 Any of you following the 3D print industry couldn't help but see that an awful lot has happened in the courts and in the government with 3D printing, in particular regarding 3D-printed firearms. Cody Wilson was the first person to create a 3D printable gun and the plans for a 3D printable gun way back in 2013 or so. A big part of a documentary movie about 3D printing, Print the Legend, tells the early story of Cody and his 3D-printed gun which he put it out there and made it available for the … END_OF_DOCUMENT_TOKEN_TO_BE_REPLACED