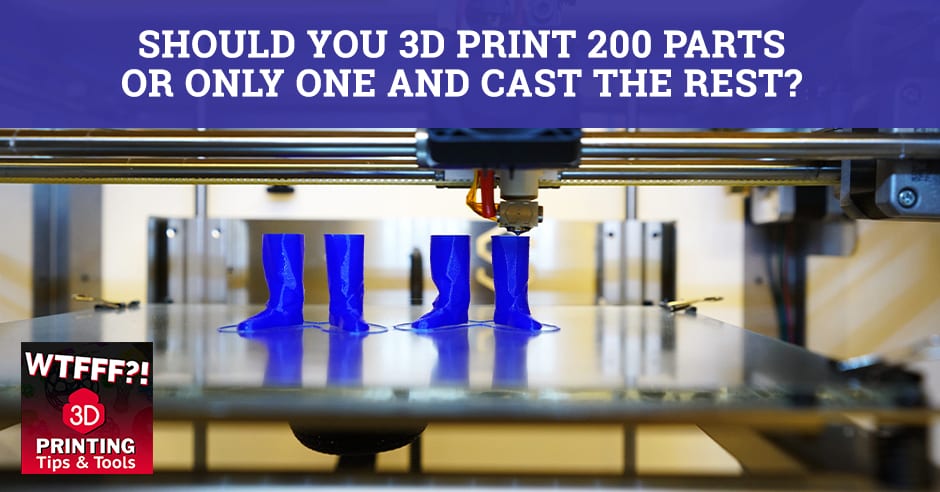 Should you 3D print 200 parts or only one and cast the rest? Tom and Tracy Hazzard talk about 3D printing versus casting when producing multiple objects of the same design. In this episode, learn why it’s important to form a game plan and knowing beforehand the essential details in your print. Tom and Tracy also dive into the aspects of a project such as the build material, design, and timeframe to decide which process could be better for you economically.

Should You 3D Print 200 Parts Or Only One And Cast The Rest?

We’re going to do another question from Eduardo Martini in Brazil.

He had a couple of questions in his email.

We addressed one of them before and this is a little bit different. It’s a good question, especially for a lot of you makers out there who use 3D printing, but maybe also have other processes at your disposal to use when making any of the objects that you make. He says that he’s designing some products for an event like a table decoration or a napkin ring for a party. This model takes an hour to print and he needs to print 200 of them. He’s asking, “Should I 3D print them all or should I 3D print one and then create a silicone mold and cast them?” It’s a good question because 3D printing for a lot of people is used as a prototyping or an intermediate step in a process. It’s not necessarily the end result or doesn’t need to be.

The first question I ask is, “What does the material need to be?” If you wanted them in metal, of course, you probably want to cast them or if you wanted to do some other type of material, you needed a certain quality of that material, like even rubber or something like that. There are lots of ways to cast them and do that. If there is a material-specific need, then maybe casting makes more sense or color for that matter too.

We know a great company and just around the corner, Shark Wheel, who does that for their skateboard wheels.

They make a unique skateboard wheel. Here’s a great example. We know they 3D print positive patterns of their unique wheel.

It has a wave look to it.

That’s why they called the shark wheels, it’s like a fin going on there. That wheel has some specific benefits and a lot of people buy their wheels, but skateboard wheels need to be made out of a certain kind of a cast rubbery polymer or rubbery plastic material. You can’t 3D print that, no material is available to 3D print that. They do make these silicone molds and they cast their wheels for production. That makes a lot of sense. There’s a good example of why you’d want to do that.

If you don’t need to use that special kind of material that can only be cast and you don’t want metal. If a material that’s available to you out of a 3D printer as an end-use product if that material is acceptable. There are a few things to consider. I imagine that it’s going to take a certain number of hours to make this silicone mold and set up and cast them all. Plus, if you’re going to use a mold, now, you’re limiting your geometry of what you can make to something that can pull out of a mold. You have to think about draft angles and undercuts and some of these things that you don’t have to worry about with 3D printing.

The form and design factors are so much broader when you 3D print something. Also, we mentioned this previously, when we’re talking about the customized versions. You’re stuck, when you mold something, with creating the same thing exactly again and again, but when you’re 3D printing it, you could customize every single one of those 200 without a whole lot of work.

With either the person’s name if you know who the 200 people are or maybe there’s some other little message that you can put different messages on each one to change it up a little bit between them.

I don’t think there’s an absolute right or wrong answer for this. It depends on what you want to achieve, what material you want to use and how much time you may have to do the job. 3D printing 200 of something is going to take you quite a while. Two hundred hours, that’s going to be more than a week of printing.

3D Print Versus Cast: 3D printing for a lot of people is used as a prototyping or an intermediate step in a process.

Also, creating a mold and molding each one because it still takes time.

Based on the things we’ve done before, it’s probably pretty close in the timeline to an hour but I don’t know. Your particular item might be different.

I’m thinking about during that hour your 3D printing, you don’t have to be doing anything with the machine. Once per hour for five minutes if you need to do something, but if you are casting a lot of these napkin rings in a silicone mold or something, you’re spending a lot of time doing that over the course of the hour. That mold is not a machine that pours itself, removes itself and scrapes any flashing off of it yourself. If it were me, even if I had the capability and I had all of the materials and facilities at my disposal to do casting, I don’t know that I would do it.

Unless I had a staff.

It’s still going to cost you in labor. You’re going to be paying more to do it. To me, if you’re a 3D print person, an enthusiast, maker, designer or whatever, you’re into this process, then use it and use it to its fullest and show off what you can do with it. That’s the other thing about napkin rings. You could come up with a design that has all sorts of twisting, intertwined forms and things that you cannot possibly cast. If you’re going to cast something you’re left with basically and for a napkin ring, a donut type of a form, it oversimplified. You’re going to have a positive form and you can’t do anything that complex or interesting.

It’s limiting. I hope that answers your question, Eduardo. I hope that it helps you go a long way to making your decision for you because it is also so dependent on what you’re making.

What you’re making, the qualities of the material, what you’re interested in and what your capabilities are. There is no right or wrong answer here. I’m leaning a little more toward 3D printing them but that doesn’t mean that’s right for you.

We’ll check it out. If it’s okay with you and it’s a good question, you might check it here on a future episode of WTFFF?!. You can also find us anywhere on social media at @HazzDesign.

You can shoot us a question right there, no problem.