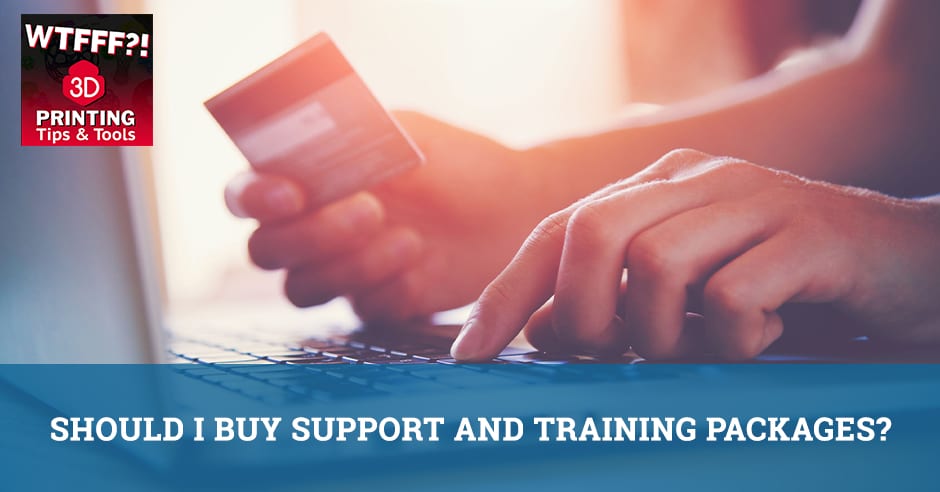 You just spent thousands of dollars on a 3D Printer, and they want you to pay more for Support and Training Packages. Should you? Tom and Tracy Hazzard discuss their results of having done with and without the added support for their 3D Printers. They will give you a heads up whether you really need the 3D printer training package, or you can simply look at the manual on your own and get going with using your machine.

Should I Buy Support And Training Packages?

Almost anything. Anything 3D printing. We’re going to jump into Education Week.

I’m excited about that. There’s a lot of great content for people.

How you’re getting educated and what you don’t know, what you may need to know in order to 3D print effectively.

This is a big subject for us because part of our show is to help people learn. That ties into this episode’s question. The question that came across is, should I buy support and training packages from my printer manufacturer?

It may depend a little bit on what kind of printer you have. More of the closed system printers like the MakerBots are a little easier to use. If you’re new to 3D printing, I still recommend you buy the support package from them.

I agree because they’ve done right by us through the support. Because you’re a part of the support program, they seem to communicate better. There are just a whole bunch of things that happen. It’s been good. It’s been worth the money.

After a short period of time, if you don’t have a support package, if you call their tech support, they are not going to talk to you unless you have purchased a package already. It’s also paid off because ours included an extended warranty on the printer. Whenever they updated something like their Smart Extruder, they send us a new one without us even having to call them.

It’s valuable. I also think though there’s not a huge user base. I saw a statistic and we’re talking about hundreds of thousands of printers being sold. The projection is by 2018 to 2022, somewhere around there, you’re talking about millions of printers sold, but they’re still getting issues and problems. It’s still like in beta. You need to have somebody who you can talk to when you come to problems because these things haven’t been tested to death that they just work.

3D Printer Training Package: Use all the resources that 3D printer manufacturers have because they can offer you all necessary support.

I do think users are experiencing things that some of the printer manufacturers haven’t even experienced. That presents a different issue, but that support and training is even more critical when you buy an open-source machine, especially one that’s using third-party software for slicing and driving the printer.

Even things like lessons on how to calibrate because there isn’t a manual.

Sometimes there’s a manual but I don’t think they’re well-written. We bought a 3D printer, an open-source printer from a company. It was a rough experience for us the first time we did that. It was not obvious how to get training. We bought it through a dealer. That further complicated it because the dealer gave us some instructions on how to level the build plate and calibrate it that were different from what the manufacturer recommends. That communication gap can happen, especially with open-source 3D printers.

Some user has their own method and they happen to be teaching you that out of a hub or out of your printer dealer. It’s not quite the same.

We’re lucky enough that we happen to be close enough to this manufacturer that we could drive there. They offered training for $100, two of us were able to go there, sit down and get trained on the software and how to run it with a recommended software, which they didn’t create. It was third-party software and in the actual process and procedures for how to calibrate the printer. It was critical. If I hadn’t gone through that training, I would have been doing it all wrong.

The other thing is that we should caveat and say that both of the printers that we have had that are open-source are two-color. There are not a lot of people out there that are two-color printing. It is complex. If you have a two-color or multi-color machine, buy the training package because it is not easy.

Not only that, every little printer has its nuances, things that are a little bit different. I’ll give you one example. Our latest 3D printer that we bought is a Leapfrog Creatr HS. There are fairly good documentation and online resources for how to get going on that. Because we have had some experience with another printer, it was a little easier for us getting started. However, I participated in a YouTube Live event about the basics of using that printer. I learned some things that were not documented anywhere else like exactly how to easily tell when your build platform is at the right level. To be able to do that calibration, there is a simple way that they don’t ever tell you but I got out of that meeting.

Use all the resources that those manufacturers have. Wherever they have that, find out, join their Google Hangout group. Some of them have LinkedIn groups I found as well, the manufacturers do. Join those things, check out the videos, make sure you’re subscribed to their YouTube channel. It’s useful.

If there is some paid training, as long as you can afford it. To answer the question, our recommendation is even if it there’s a cost to it, if it’s available, it is worth it.

We hope that answers your question. We’ll look at some other ways to educate and train yourself. If you have any questions, especially about 3D printing, training or how to get information on something, we want to hear about it. We want to hear about all of your questions, ask us anything. We have a new little tab on our website. It’s HazzDesign.com. There’s a send voicemail and it’s this little tab that shows up at the top of your web page when you log into it. We also have a send voicemail on Facebook and we’re everywhere on social media, @HazzDesign.

The voicemail thing is straightforward. You can do that on your smartphone or you can do it on your computer as long as you have a microphone. Thanks for reading.