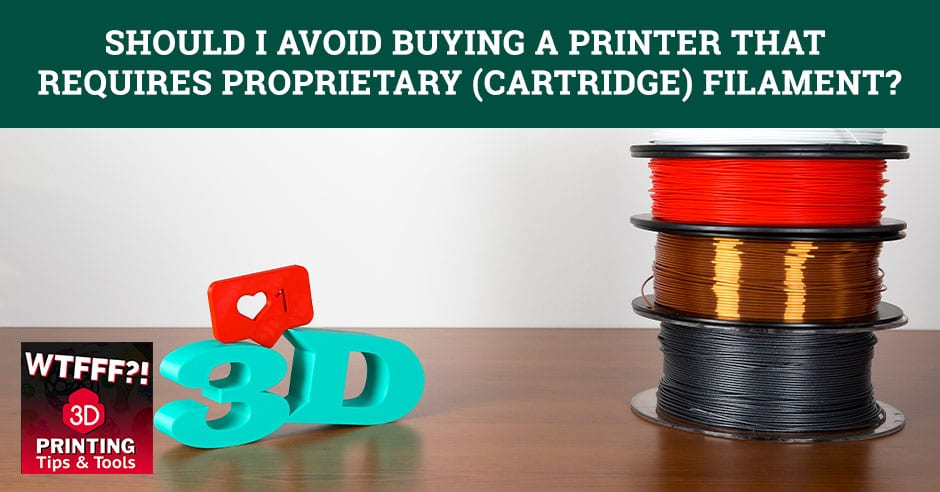 Most 3D printers would accept any filament of the right diameter, but a few require a proprietary cartridge system that prevents you from using any filament other than theirs. Where should you draw the line when it comes to proprietary filaments? Should you avoid buying printers that require them? For Tom Hazzard and Tracy Hazzard, the answer is yes and no (but definitely, yes) – depending on what you’re using your printer for. Tune in for more.

Should I Avoid Buying A Printer That Requires Proprietary (Cartridge) Filament?

This is the WTFFF?! 3D Printing podcast Ask Us Anything segment.

This episode’s question is, “Should I avoid buying a printer that requires proprietary filament?” It’s an apropos question, which we saved because we’re going to be interviewing XYZprinting. One of the big criticisms from a lot of the industry people is that they have a proprietary cartridge. Let’s talk about what that is.

In case those of you who may be new, just an explanation. A lot of 3D printers, the more open-source ones, you buy any filament of the right diameter and you can put it into any printer. A lot of printers will take any filament you want, but there are a few printers that have a cartridge system.

That printer will only run if that cartridge is in the printer. There are some benefits that it gives the user for using that. In reality, it’s limiting as to what materials are available and the cost of those materials.

For a beginner, when you don’t want your kids to have to worry about threading in filament and dealing with all of that or if you don’t want to deal with that, then that’s fine. Especially if you’re learning and it’s a low-cost printer, it makes a lot of sense. What I can’t stand are the high-end printers. The 3D systems one, that big $10,000 printer and it has a closed cartridge. That drives me insane because who’s printing on those printers? Professionals. Professionals want whatever color we need for our job and then you’re stuck with only the colors that they happen to offer in these closed cartridges. That drives me insane. In XYZ’s case, where they have this closed one, from a simplicity standpoint, it makes a lot of sense here.

They’re targeting beginners, young kids, and students as young as 1st and 2nd grade. In that sense, I don’t think the material and color are that critical. More ease of use and reliability is more critical. That’s okay, but as we’ll get into it a little more in-depth in our next podcast, they have a printer that doesn’t require cartridges for the more advanced user if that’s what you want.

It is an advanced feature to want to use whatever color you want to use after you figured out how to make the printer run and my choice in an opening printer. There are many of you trying to figure out what printer you should buy and that’s why you’re reading our podcasts. We want to help you with that. The first thing you need to decide is what you want to print. This is why we call it What the FFF?! What do you want to print? Make sure that you are choosing the right printer that has the right material to begin with.

If you want to ask us what the best printer is for your six-year-old, then it’s a hard choice. We haven’t yet tried out the XYZ. I can’t say for sure. The price is good, but we were impressed with the Polar3D as well. It was not a closed cartridge.

You could use any filament you want.

They had a fairly simple way to stick the filament in and it wasn’t difficult. That’s the thing with these entry-level printers that are targeted at the young consumer, young printer. You need to remove as many variables as possible in the process. To be honest with you, the number one variable to remove that made our 3D printing beginning experience more successful was the removal of the complicated open source slicing software. The fact that our MakerBot has a closed system did us a service.

A 3D printer with a closed cartridge system is okay if you’re a beginner. If you’re a professional, though, that’s another story. Click To Tweet

It did us a lot of favors, didn’t it?

It did. We would have given up fast because it would have been too time-consuming and too difficult.

You would have been screaming at me to stop spending so much time on that machine when the MakerBot slices it itself and it goes. That doesn’t mean that everything worked the way we wanted it to the first time we printed it, but it certainly made things easier to get going down the road and figure out what was going to work.

That’s the number one thing that I recommend because it makes a difference when you’re not messing with that. If it has less complicated filament and way of inserting it, way of starting it or a closed system like this for a filament and a cartridge, that would be the second because the next biggest problem you have is constant jams and constant filament problems.

We’re seeing more printers coming out and we’ve seen a few at trade shows where even if you use a common filament that’s not a cartridge, a lot of these printers are auto feeding it in and auto injecting it. That makes things a lot easier.

Those are the top two things that I recommend that you do. I also don’t think you need a heated build plate to start out unless you have a specific material need as something you’re trying for your professional business use eventually and you want to learn on it to begin with. The other thing is that if you find an auto-calibrate, that would be the fourth thing.

For a new user, that is something that can be frustrating to deal with. If you’re a highly technical person, maybe you get it and you understand how to do it. You do it once and then you don’t have to mess with it much. More often than not, it’s probably something that has to be done regularly. It would be nice that the machine did it for you. You can worry about what you’re trying to do and that’s what you’re going to print.

To answer the question specifically, I wouldn’t avoid buying a printer that had it.

I would say, “No, I wouldn’t avoid it,” but also you might say, “Not necessarily.” It’s maybe the slight variation of that.

You don’t necessarily need it either. You don’t have to buy a printer that has a proprietor filament to make your life easier. There are other printers out there that do that as well. It wouldn’t be a reason not to buy it if I were a beginner. I wouldn’t buy it if I were a professional though.

It’s too limiting. Professionals typically want to push the edge of what they can do.

The reason why you’re buying a product out there in stores and you’re dissatisfied with it and they only come in black or white is because they have to make hundreds of thousands of them and sell them. That’s the same problem that happens when you’re making a cartridge and you have to fill it with a filament. You’re now even having what is already a limited filament market. On average, a lot of these big companies have maybe 24 colors and now, you’re probably going to have ten. You’re going to make it even smaller because you’ve got more to deal with and you’re only going to go for the ten bestselling colors. You’ve limited it even more. That’s what happens when you get to a proprietary. They don’t want to make a broader range.

Proprietary 3DP Filament: If you’re a professional, printers with proprietary filament are too limiting because you’d be stuck with only the colors that they happen to offer.

Those manufacturers want to sell larger volumes of things, not lower volumes. Those nicer colors don’t sell as much.

From a professional standpoint or advanced user standpoint, that’s why I would head away from that. For beginners, remove a variable. It’s easier.

The more people that get into it, the better it’s going to be for everybody in this industry and consumers in general.

To update everybody, the new site is 3DStartPoint.com and WTFFFPodcast.com. That’s where you can find us. You can still find Tom and me at Hazz Design. You can find us on social media @HazzDesign.

Thanks for reading, everybody. That was a fun question. I enjoyed that. Hopefully, you did too.