Tech Tuesday meets IP with a patent announced recently by a Polish 3D printer manufacturer about a self leveling 3D print bed. The patent they have filed is combination of software and hardware that sounds very similar to what another company, MatterHackers, has done with their software. Leveling a 3D print bed can be a tedious task, and to get 3D printing to a more consumer level, this is an issue that needs to be solved before widespread home adoption becomes a reality.

We are going to talk about tech IP and the possibility of a self leveling 3D print bed. This is regarding a patent that is announced recently by Zortrax which is another Polish 3D printer manufacturer. I’ve been really impressed by some of the printers coming out of Poland. Zortrax is in the news now because of a patent regarding a self leveling 3D print bed technology. It involves both hardware and software, and is a combination of both that it is calling out in the patent. It is calling out a process that involves the hardware and software that sounds very similar to what the guys at MatterHackers have done in MatterControl with their bed technology. Leveling a print bed is one of the more tedious and frustrating things to do as a user of 3D printers. For 3D printers to be widely accepted by more consumers, this process has to be automatic.

It caught my attention and I am glad to see that people are doing about it. Some 3D printers you need to actually make the bed level with screws or knobs at the corner of the print bed. I thought it was interesting and the first people I had heard of that did something similar were MatterHackers. They take three measurements of your build plate. It does not matter whether it is truly level or co-planar with the nozzle or not, it did not really matter. What they do is they measure three points on that plane. If there are students or physics teachers listening to this, it is well known that three points in space define a plane. It does not matter how that plane is tipped. A plane is a plane.

Interestingly, what MatterControl has done is measure three points on the build plate. Instead of making you move that build plate to make it truly level, it reads those three points and it knows where the plane is. Instead of the Z axis screw remaining static between each layer and just moving when it is moving down to the next layer to print, the Z axis screw is constantly moving up and down depending on where your nozzle is on that build plate. It is essentially doing all the math that is interpreting where the plane is.

As long as the computer in the 3D printer knows where the plane is, to instead of moving that nozzle only in a horizontal way to the build plate, if it moved horizontally, it might be too far away from the build plat at one point. I discovered that as I was using an extrusion machine with MatterControl, is that your two nozzles if they are leveled with each other, which it throws off the whole system because you can’t define three points on a plane for one nozzle and then for another nozzle also. That breaks down in a dual nozzle situation. Since more and more 3D printers are going with single nozzle even if they are feeding multiple materials through it, then maybe this will work. 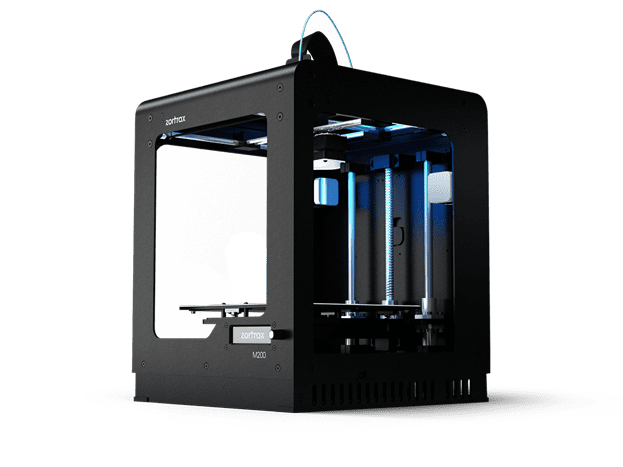 This Zortrax patent revolved on the same idea accomplishing or automatically leveling or measuring that plane of the build platform in three points with an electrical sensor connected to the nozzle. I wonder if that is a key aspect to that patent if they are using an electrical sensor in using three points on the build platform. I think the MatterControl did not have that. You just had three points on the build plate that  you moved it closer and closer until you put a piece of paper between the nozzle and the build plate and you have that touch feel as to where is the right place. You then tell the software that the point is set to move on to the next one. It is not automatic in that sense, but I know that certain printers like the MakerBot automatically sense things like that. They are truly level ling it on that printer.

Automatic self leveling 3D print bed technology gets my attention because it is important for the industry. They seem to have achieved the patent here. Good for them. It is something needs to be used more widely in the industry. I consider this a tech subject because your average user going forward does not want to know how the thing is leveled. We don’t want to know how are inkjet printers were clearing the nozzle. It is ridiculous that we have to deal with all of those issues. This is different in 3D printing. We don’t need to fuss with our 3D printers. We need to spend our effort on the design and not on fussing with the machine. I see calibrating the print bed on a 3D printer as it being a very old school situation, even though this is still a fairly young industry. Earlier printers are very manual printers in requiring you to do it. It is going to be less in going forward with things like this self leveling 3D print bed technology emerging. It is  going to be less and less going forward and an old school dinosaur of an issue down the road.

This company is placing a lot of value of its company on this intellectual property, because this company is in Poland where international rules on patents are very expensive to enforce. Will this company Zortrax have enough money to go on and try to enforce that patent? They sold 5,200 printers revenue of $30 million and profit of $8 million which is 21%. The good profit numbers would allow them to go on an intellectual property battle. International orders might increase the cost. It is not an inexpensive proposition.

If you are a big enough company like MakerBot, what do you want to do? You acquire them. Make it highly acquirable from someone that is infringed. If a larger company realizes that they are infringing on it, maybe they can do it and say to go ahead and sue because they have more money to bet the other party. If I acquire you, now I can squeeze those competitors and wage against them and force them out of my sandbox. It is usually about market share at the end of the day. It also can be about if you are building off something that patent and you want to keep that part secret, then the best thing to do is to acquire and build that patent into your portfolio.

Final Thoughts on the Self Leveling 3D Print Bed Patent

I am impressed by it. They have not published the claims here that is why I don’t know how narrow the claims are. In principle it makes perfect sense, and they’ve got a patent. They have achieved that. Good for them. More power to them. Let’s get more self leveling 3D print bed tech in as many machines as possible that is necessary for the future.

Great job Zortrax. We look forward to seeing more from you in the future and growth to your company. I want to get these machines from Poland to review. Sometimes patents in the 3D printing industry touches a nerve to people. People think that nobody should be patenting something new. The expiration of patents gave birth to this new industry. I don’t have a problem with patents, I like it. It pushed the industry forward and moving it forward.