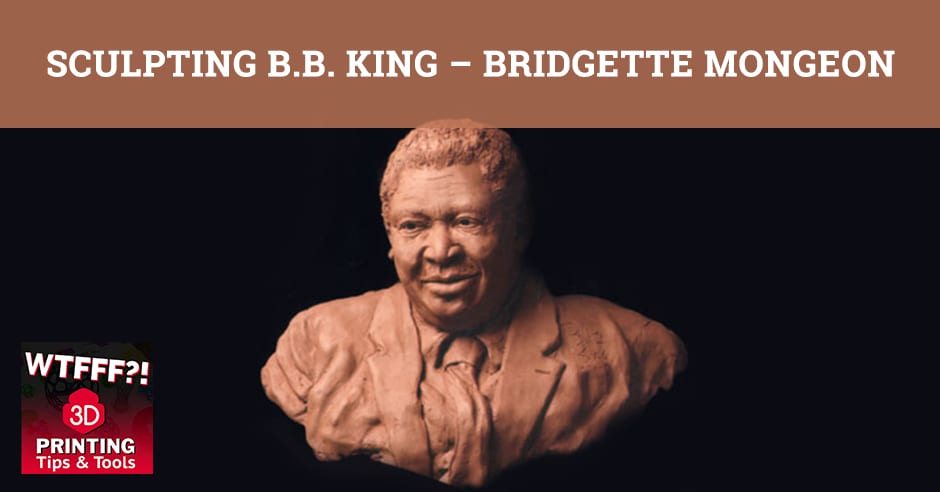 Deviating from the typical Ask Us Anything format, Tom and Tracy Hazzard couldn’t resist sharing with 3D Print Artist/Sculptor Bridgette Mongeon’s story about the impact B.B. King had on her personally and professionally. In light of his recent passing, Bridgette’s story shows the personality that comes through so clearly in his music which has touched so many. Don’t miss the important lessons she learned from working with B.B. King and how it has also influenced her daughter.

Normally this would be our Ask Us Anything segment.

We had something occur in a long interview that was something special and it needed some special attention.

It was good. We had much fun talking with Bridgette Mongeon. She’s interesting. She’s done many cool things. This one, the story that she told and everything is in the news and timely.

Let’s get to this story from Bridgette.

Unfortunately, we had the passing of BB King, but we hear that you had a chance to sculpt him?

The television crews came to my studio because I wrote a blog post about my interaction with BB King. Thank you for letting me share this and I hope I don’t cry because it is quite emotional. I wrote this blog post because I’ve been saying to myself, “I need to start writing down some of these interactions.” I’ve sculpted Willie Nelson, Bill Monroe, BB King and some of the things in the 30-plus years of creating that have been interesting epiphanies to me and experiences. When BB King passed, I thought, “I need to write this down. I need to go back in my brain and think about when this happened and what happened,” and I did. I wrote this blog post, which was extremely long.

Everybody asks, “How do you get a sitting?” I asked. Another gentleman posted a blog post because I’ve spoke at 3D Printing World Expo. I always try to get the artist into a round table. He said, “I asked you how I could get into more 3D printing shows? You simply said, ‘Just ask them if you could be in there.’ It was a simple answer but it’s true.” I asked if I could do a sculpture of BB King and his manager allowed me to do that. I had a sitting with him and the first sitting, I take measurements and photographs all the way around the client. I met BB King at a hotel where he stayed, which has long been torn down.

I did these measurements. This is the funniest story. I had the calipers in my lap and he was sitting next to me. He’s a huge man and the biggest personality. I’m sitting next to him and I said, “Mr. King, I have to touch you during the sitting,” because some people don’t want you to touch their face. He looked over at me and he rolled his eyes and he said, “Darling, you’re already touching me.” I said, “Mr. King, I don’t know what you’re talking about. My hands are in my lap.” He said, “It’s your thigh. It’s against my thigh. Believe me, the thrill is not gone.”

I did this bust in 24 hours. He came to my home. He had dinner with me. He looked around the sculpture. I changed a few things, little minor details. He said, “It’s such a great likeness and it looked like it could talk. You’re welcome to come to my show this evening.” I’m thinking, “I haven’t slept for 24 hours,” but I’ve been asked backstage. When you have backstage passes, they don’t give you a seat. I was so tired. I stayed for one set. A friend of mine said, “You look tired. You’ve stayed for one set, maybe you should go home.”

Sculpting BB King: We all pass something pivotal to our loved ones without even realizing it.

This is the hard lesson I learned that BB King taught me. It turns out that he was looking for me at the end of the show and was going to call me up on stage and introduce me as his personal sculptor. My rep told me that and I said, “You told him I was tired.” She called him B because that’s what he told us to call him. She said, “B told me to tell you it’s not over until the curtain goes down.” It doesn’t matter if you put in the extra hours, it’s not over until the curtain goes down. The reason why it was emotional for me is because he was pivotal in my career as an artist. By being able to say, “I sculpted BB King,” I got many other commissions.

My daughter did this blog post. She’s a photographer and a graphic designer. She owns her business. This post that she did, I cried and I just wept. It was all about The Day BB King Came to My House For Dinner. She was only five, but she went out in the front yard and picked dandelions. She gave BB King weeds and a note, which he put in his wallet. He said it was very special to him. My daughter said that she appreciated what BB King did. She realizes now what a pivotal thing that was for my career. More than that, it also showed her what it was like to have a mother who followed her dreams. That taught her how to follow her dreams, be creative and that you had to make sacrifices. These sacrifices were worth it. Back then, I probably thought, “I’m taking away from my kid. I should get a real job.”

We’ve all had those thoughts.

This post was incredible to let me realize that I pass something on to my daughter that I didn’t even know I was passing out on. That was belief in herself and the fortitude to pursue her dreams. It was a very emotional week. I’m so appreciative. I’m sure BB King is in heaven. I did ask him when he came to my house, because he got me at the hotel with “the thrill is not gone.” I handed him my tool and I said, “Mr. King, will you sign my bust? The sculpture, Mr. King,” because he looked at me like, “What?” That’s my story about BB King.

Thank you so much for sharing that.

We hope you enjoyed reading that little story about BB King. It is timely because of his unfortunate death.

She asked BB King if she could do a sculpture of him and he agreed. That’s one of the most important lesson I hope we got out of what we learned. You should go out there and ask. It can’t hurt.

You’d be surprised what some people would agree to let you do. We hope that you will ask us some more questions. We’ll be back to our regular Ask Us Anything or send voicemail all over our website, HazzDesign.com, and all over our social media profiles @HazzDesign.

Thanks for tuning in and indulging us for this departure from our normal format. We’ll talk to you next time.