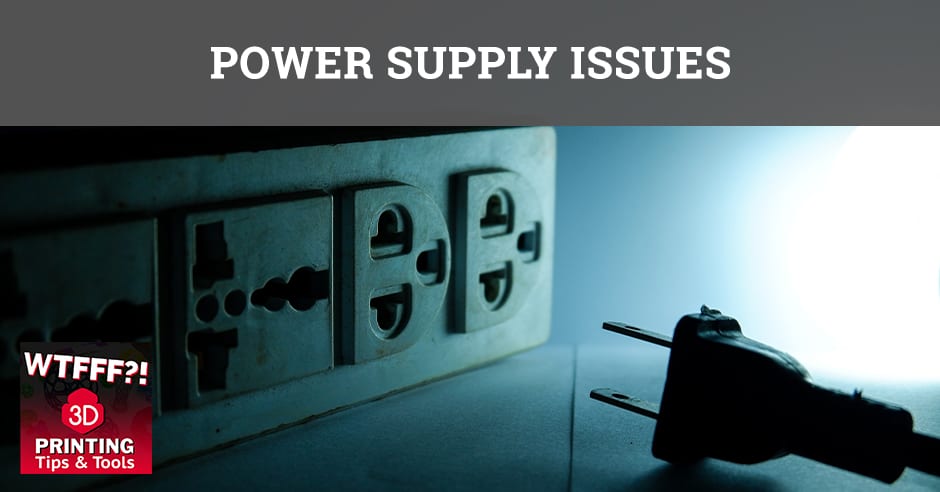 There is nothing more annoying than power interruptions in the middle of printing. Whether it is an outage or a surge, your print will most likely be affected. Tom and Tracy Hazzard discuss power supply issues, sharing the best ways to power your “what”—printer, laptop, and the likes—no matter your “where.” Don’t let power supplies ruin what could have been an efficient and good print. Follow through for tips in this episode.

This is less of an Ask Us and more of an issue that we’ve had crop up multiple times, both talking with Kelechi who is our mentorship winner from Nigeria and also from lengthy prints that have been going on in our own business and the idea that in California here, we might get El Niño.

Here’s the issue of being in the United States we’re learning especially in certain Southern Gulf States like Florida, Louisiana, and places like this where they get a lot of thunderstorms. We’ve been hearing from readers that they get power surges even if they don’t lose their power. If they get a power surge in the middle of a print. We had one person we talked to that was doing a 105-hour print and in about the 104th hour, literally they had a power surge and then it was done. The printer recycled, rebooted itself and you couldn’t restart the print for that last hour. Your print is ruined in all that time. What do you do with that? The question also comes up because we hear this El Niño coming and here in the Western US over this next winter, we’re expecting a lot more thunderstorms and a lot more heavy rains and in California, with that comes the risk of power outages.

I think that’s something that as you’re buying a 3D printer and setting yourself up with all the equipment you need, the materials and supplies, you may need to consider something to help with this situation. The situation is how you can make sure you can finish that print uninterrupted and if you have power fluctuation problems. Let’s talk about that first. The first way would be to buy an Uninterrupted Power Supply or people sometimes refer to it as a battery backup, UPS. These things are available. They’ve existed for computers for years. I remember even many years ago in our own business. We lived in Rhode Island at that point. We had a lot of thunderstorms and we were doing business on the internet. We needed our computers all day long and we had uninterruptible power supplies so that we could keep working. We wouldn’t also have a computer shut off on us.

Nowadays, we use our laptops so we don’t think about it as often. We don’t have them in our office, but we need to get something.

We need to get it for our 3D printer and here’s the thing. It’s only going to allow you to continue printing for maybe an hour. It depends on your particular 3D printer and its power consumption requirements. It will certainly help you with the surge situation.

You don’t want to have a surge happen because then you’re going to be out.

If you lose power and if you only lose it for up to an hour or so and there are different levels of battery backups, you could keep printing uninterrupted. That’s great. In Nigeria, they have a little bit different situation where Kelechi told us they only get power usually about fourteen hours a day. They’re looking at generators. Even in that situation, you’re going to switch from the grid power to a generator. You’re going to have a period of time where there is essentially a little surge or a little loss of power for a period of time. He’s going to need a battery backup in order to bridge that gap from grid power to generator power and back.

I think it points out a flaw in the printer programs themselves that there is no way for at least in any of the printers we’ve tested so far, for you to be able to pause a print, shut your machine off, restart it back, and resume back at the point.

Power Supply Issues: Print manufacturers should build a feature into their printers where you can only pause a print, but you can save the remainder of the print to memory.

The closest thing that we’ve found and I’m sure there is more than one printer that does it, but on all the printers we’ve tested, so far the MakerBot printers have a pause function where you can pause the printer and the extruder moves away. You can change filament if your filaments are running out.

You can’t stop the printer.

You can’t turn it off, but you can resume the print and pick up where it left off. It stores it in the machines. What we want to do and we’re encouraging printer manufacturers to build a feature into their printers where you can only pause a print, but you can save the remainder of the print to memory, turn off the machine. As long as you don’t remove your item half-built or partially-built on from the build plate, you could turn that printer on and resume at a later time. That would work well for Kelechi’s situation in Nigeria or I think anybody. What happens if you lose power for a couple of days? That’s happened to us a few times in different places. We lived around the United States. You’re not going to operate a generator consistently for days to get through that.

This may not be a big issue if you’re a home user. You definitely want to protect yourself from surges, but if you’re a casual home user, that’s totally fine. You’ll start up a new print and you’ll print all over again. It may not be the end of the world, but if you’re in business, this is critical.

You’re talking about lost time, lost productivity, and lost earnings and you can’t afford that.

Put that on your initial purchase plan if you are sorting, starting to plan your purchase of a 3D printer, a filament, the whole package, put a UPS in there. It’s not that costly and it’s worth the money to save your printer from a surge.

Even if you don’t do it initially if you can’t quite afford it. Put it in your plan and get it when you can. There are lots of different companies out there. I know one company that we had a lot of good luck. It was American Power Conversion and they’re on the East Coast. I think they’re a Rhode Island company or Massachusetts company or something like that. They make good quality ones that have done it for a long time. I know they are reliable.

I’m sure there are a lot of other ones out there. You’ll probably find them on Amazon or anywhere else. We’ve had good luck with us in the past.

Your printer’s power requirements before you buy it and APC and these other companies have guides on their websites to help you figure out what size one you might need.

If anyone else has issues or questions, our Ask Us Anything is free. You can go to our website at HazzDesign.com or anywhere on social media @HazzDesign. You can ask us these kinds of questions or have us research something for you. This is something we had to look into for Kelechi and it brought up the issue. We’re happy to have you spark a new episode.

Please do. We’d love to hear from you. Thanks for reading.