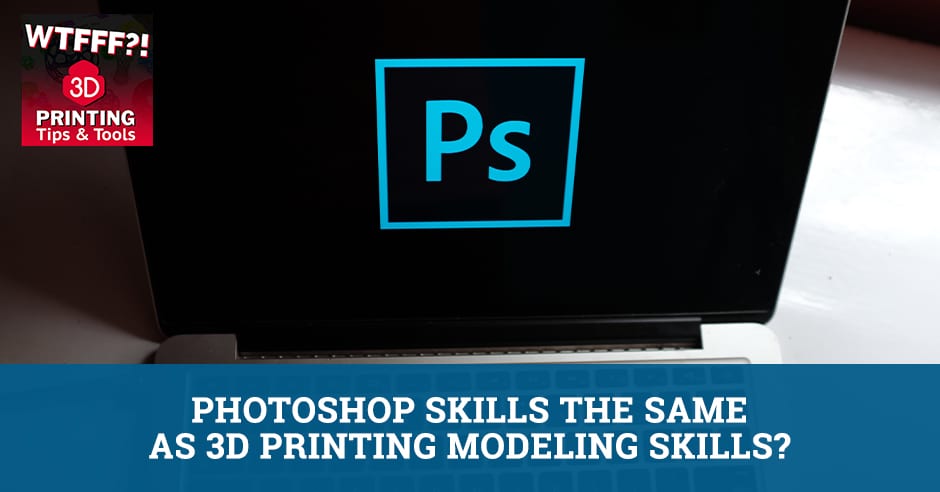 Can graphic skills translate to 3D printing modeling skills? Maybe or maybe not. Hear about Tom and Tracy Hazzard share their experience with 3D printing design software. They also talk about the overall design process to determine if you have what it takes to design for 3D Printing.

This is a continuation of our Education Week. This question is a loaded question. We’re going to try and give a quick answer. The question is, “I know how to use Photoshop. Am I going to be able to create 3D models for 3D printing?”

I know Photoshop and I still can’t make 3D models for 3D printing. I’m embarrassed to mention that, but it’s not the way our business operates. I’d have to spend a lot of time learning.

The way we divide and conquer our business tasks. We design together all the time. In terms of the actual execution and creation of 3D models, that’s something I do. It’s something that you’d like to try to do.

I’m pretty competent in Photoshop. I’m skilled there. I also have used CAD software for making textiles, which is complex. You’re talking about a complex combination of 2D turning into simulation. I have a lot of skills but the language difference between Photoshop and 3D modeling software is much more complicated.

The advantage you will have is you’re a heavy computer user of complex programs. There’s a certain amount of learning a program like that where understanding the complexities and menu structures and things like that. You won’t be starting from absolute scratch. However, CAD programs are entirely different.

Our business is structured in such a way that I probably don’t have the amount of time I need to train and learn a new software. It would take me longer to do that than it would for us to pay someone if we needed it. It would be nice sometimes because I have some ideas in my head and we have to get in cube so you can draw it out for us. I can sketch it out, but I can’t draw it myself in the modeling software. There’s a case in which I want to do that. I want to do some things. I can totally see someone who’s got a nice little Etsy shop. She’s making jewelry or Christmas ornaments and she wants to go from having done the printables which there are a lot of those on Etsy, to the printables, to something three dimensional. I can totally see that.

It doesn’t make the most sense for us to have you trained to do it as much as I do it, but I do think it would be an advantage if you could start to get some forms down there, at least the basic level. We’re going to try that at some point.

We have a guest and his company is called i3D Creatives. That’s John Bokla. It’s I3DCreatives.com and he has a training program for kids.

It’s a series of videos.

It’s visual, you don’t even have to speak English. You could operate it in any language. I love that. It’s basic for kids. It steps them through the design process. It teaches them geometry too because that’s the one mistake that people think. I do think in three dimensions because we design product all the time, but there are a lot of people who use Photoshop and other graphic programs. They don’t think in the three-dimensional geometry so it’s different. For it to step you through that, that’s great. He’s offering a promo and a printer giveaway.

You’re going to want to pay attention to this.

We’re going to say it now even though we’ll say it again on the interview podcast because they’re running out of time. It’s I3DCreatives.com/WTFFF and there’s a download to the eBook that he’s created which steps you through the simpler part of the process or the fundamentals. Anyone who registers on his site and you enter your email is entered into the printer giveaway.

That’s worth checking out.

There are not a lot of places like that who are going to be able to help someone who has some amount of Photoshop skills and those things. We want to keep looking for them. If you know of any, let us know.

People need resources for how to create what’s in their mind if they don’t already have those skills. How are they going to learn to do it and downloading files will only get them so far.

Our previous guest, Lars, MatterControl and the MatterControl Touch, they have a future of wanting to be able to take a three-dimensional model that already existed. You’d be able to type text in there, modify it, make it bigger or smaller, do some minor things. That would be awesome, but it’s not there yet. It doesn’t exist yet. We have to try some of these other things that are out there. There’s Google SketchUp, Tinkercad, Autodesk 123D. A lot of those programs out there have free apps. There’s a little bit of capability where you can try them out and start to see. That’s a way to get your feet wet. See if your Photoshop skills translate.

If you’re reading this and you need to learn to try to do CAD yourself or you have an interest in the education of others learning to do it. You’re going to want to read our next episode because we’re going into this in much more detail. I’m excited about that one.

Thank you so much for calling in and asking us about that question because that’s a loaded question.

It’s hard to answer in this short Ask Us episode, but there’s more to come.

If you have any questions or you want to point out some educational program software, something we don’t know about, please let us know. You can go to our website HazzDesign.com. There’s a send voicemail button at the top. There’s an Ask Us Anything page you can go to. You can send us voicemail over Facebook and everywhere and on social media Twitter, YouTube, Instagram. We’re @HazzDesign.

If you prefer not to leave a voice message, you can also send us an email just go to HazzDesign.com and you’ll find it there. Thanks for reading.