3D Printing meets concrete to create beautiful walls, space dividers, and art in a form of 3D architectural. This goes far above and beyond 3D printed concrete walls that we have seen and really inspires us to think about what 3D printers can build to create talking pieces in your business, trade show booth, or unique installation in your home.

This one on modular 3D architectural prints ties into yesterday’s talk about trade show booths. This is definitely something you could use to help create walls, panels, other things in trade shows booth. We’re going to talk about architectural modular use of 3D printing. 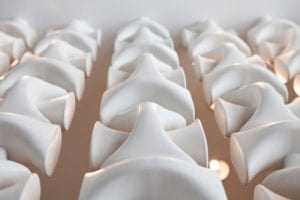 There’s been some great photos and information out in the media lately about some people doing this. Concreteworks, using concrete but also using 3D printing to create these repeatable patterns that are interior architectural installations, space dividers for rooms or just wall hangings. You can use them in so many different ways.

They created 3D printed pattern for one of these in particular, and a mold for casting concrete that was then used. When you think about architecture, if it needs to help hold up walls, because it’s a part of the building, then you need to make it out of something that can handle it. Concrete is certainly one of those materials. I know there’s some 3D printing of concrete we’ve shown and other architectural applications, less design and more just functional.

This is really casting from a 3D print mold, but it’s still the same idea. I think that we want to use this as inspiration to say, why couldn’t you 3D print those modular pieces? Why can’t you do that? You got a twelve by twelve bed, use it. You can be creating modular system created off of that and different forms. You maybe have three or four different ones.

I know it would take a while to build up a big enough wall or big enough installation. But there’s no reason not to do it if you have the capabilities and you have the machines to run it. This is a great idea for how to build your trade show booth yourself.

It was Michelle Wempe and Concreteworks was the company who actually made the 3D architectural prints. They did exactly that. 3D printed made silicon molds and then also used some reinforced fiber in there so that these concrete parts were incredibly strong.

What I really like about the 3D architectural prints are the forms here. There’s hardly a straight line on these forms. I noticed actually, in reading about it, that they actually used Rhinoceros, which is my preference of software for exactly this reason, for creating more organic forms and surfaces. It makes complete sense to me how they were able to do it.

But it’s not just this ambiguous organic form. It has some order to it. It also has structure in it. They engineered these pieces so that they could put reinforcing rods or things through it that are tying it all together and have it make this form. When you look at some of these photos, of the overall installation after it’s done, it’s a beautiful texture and pattern.

I think it’s really cool. It has a lot of texture, a lot of depth to it. I think you could go even further with it and really actually 3D print all those pieces and really go into doing something that has much better reference or highlights your work better or creates nooks and crannies that are not so completely systematized, so not every pieces exactly the same. Because you have the ability to customize them. You have the ability to grow that. 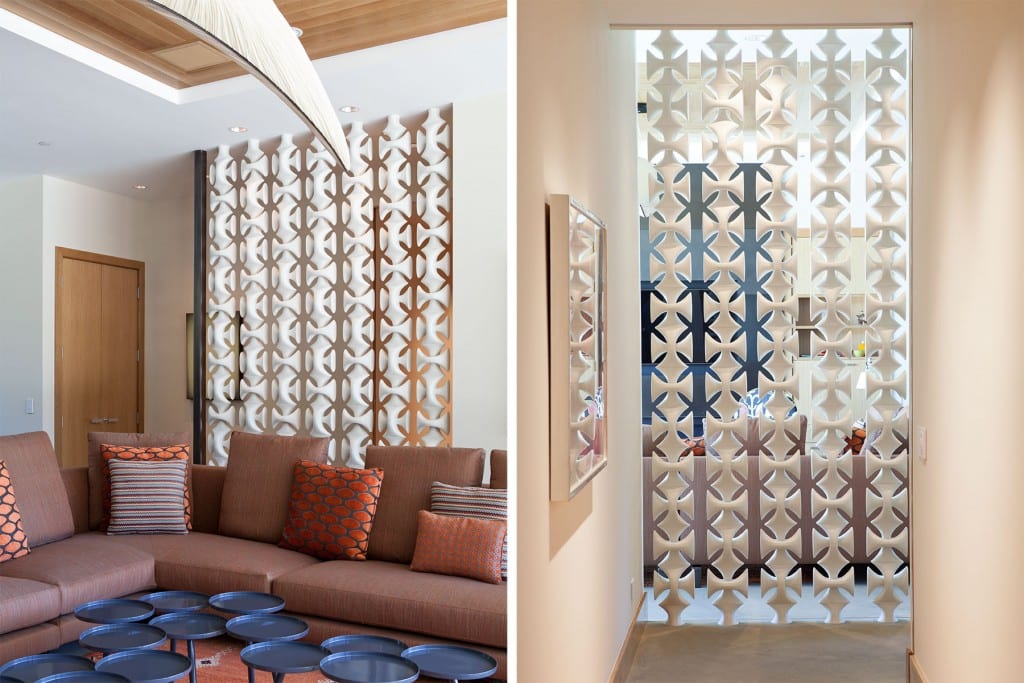 I keep thinking about that company that made those little wall mounts. I forgot. They put plants in them and other things. There was a design we’ve reviewed at one point that had a bunch of these planters. Going through that idea, it’s like, why not use them to display things? You can get a modular wall, create your own mounts that go on to the modular wall. Or a grid, a metal grid and then you mount your pieces on there.

I’m impressed they use 3D printing to create a silicon mold and cast concrete. But concrete has some significant limitations as well, as a material, that 3D printing of different materials, maybe even ceramic 3D printing for instance, could offer other opportunities here. Even plastic. It would be great to explore that.

I’m remembering the 3D printed kayak we talked about a couple months ago. That was made in a modular sense of, I forget, fourteen or sixteen different prints. Each one was slightly different. It doesn’t have to just be printing one thing and then putting it in repeat. It could be constantly changing. A little more work on the CAD side of things.

The production of it is no different. It’s just, you’re going to produce that many pieces anyway. I don’t see any reason why not. Why shouldn’t they be different if it’s meant to explore something, if it’s meant to show it off, if it’s not necessary to be the same? There’s really nothing wrong with doing what they did. They may have had their reasons for it having made of concrete or whatever reason. But certainly, it brings up lots of other opportunities and things to explore.

The other part that it also reminds me and brings up is that the idea of creating. We had that episode on the architectural moldings and everything. It’s like, when you have a unique piece that you can’t replicate or you need to redo it, you’re going to paint over it. You’re going to do that.

There’s no reason here also to do the same thing, to have a piece that is plastic underneath it and then give it a good plaster coating or something like that. They have all these paint finishes that have that concrete textural quality to it. There’s no reason you can’t paint right over it. Or dip it in a certain material too if you want to disappear the plastic. It could just end up being a frame underneath.

Take a tip from all the cosplay and all this stuff that’s going on in Hollywood that’s using 3D printing and do the same thing. There’s no reason you cannot create an entire gigantic wall out of it if that’s what you want.

Still, as soon as I saw these 3D architectural prints images, I was impressed. I thought that was really cool. These 3D architectural prints have that Escher quality that we like too. We love that. What they’ve done is they’ve made, I think they actually molded a couple of different pieces but they made one modular assembly. You rotate it 90 degrees and it appears to do one thing and then the next one is rotated 90 degrees back. The whole thing is serpentine like in how it flows. I do like it.

If you guys have anything that you’ve been doing, please tweet it out to us, send it to us anywhere on social media @HazzDesign or @3DStartPoint. We look forward to hearing what you guys have done that’s really large and maybe doing 3D architectural prints installations within your homes or your offices. Please send us anything that you know of or are doing yourself. We might talk about it on the show and put it in the blog post so everybody can see it and help you give you some exposure.