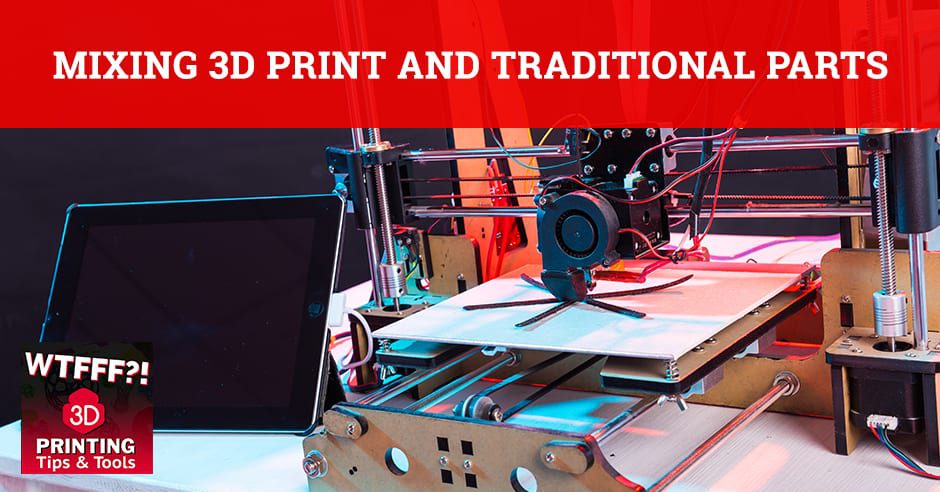 Curious about whether you can mix traditional and 3D Printed parts in a product? Tom and Tracy Hazzard say, why not? They talk about how you can mix 3D Print and traditional parts and why this “hybrid” is the biggest market opportunity in 3D Printing today. But before you go and dive head first, there are some important things you need to consider. Learn about them in this episode.

This is Ask Us Anything. It’s a good question, which is can I mix traditional and 3D printed parts in a product? My answer immediately is of course. Why not?

I wish they would have told us what they were interested in making because that also has a lot to do with it. It’s always about the what.

That’s okay. I think we still can give a meaningful answer here. You can. We have three things that we think are important to consider if you’re going to do that.

Number one is materials. If your materials are mismatched, this is one of the hardest things that I’ve helped companies with year after year. The biggest problem is that one of their parts is in ABS and then another part is in some soft flexible material and the colors need to match. I roll my eyes and go, “Why would you decide to match the colors? It’s much harder that way.” You have a color problem in addition to a mismatch of materials. With 3D printed, even if you’re using the same material, it has different characteristics when it’s 3D printed because you’ve got strength characteristic problems that happen as well. You have to dial that in and look at your materials carefully, look at the strength characteristics of the materials and make sure they’re well-matched or compatible.

It’s a good point on the materials, but I think the fit is also another critical thing. This can get boring for people on a technical level. I’m going to try not to go far down that road. If you’re going to match 3D printed plastic part with an aluminum part, with a steel part or wood part, each of those other traditional materials has properties and characteristics. They will grow or shrink at different temperatures. You can glue some of them together. Others you have to attach mechanically. When you 3D print something, even though you’ve designed it to a certain dimension in the computer, your 3D printer printed part may not be the exact dimension you started out with. Different printers have different tolerance issues. You may need to adjust the scale or size of your 3D printed parts multiple times to get it to match perfectly with your traditional material.

That’s the same thing. If you’re offering up that part as a downloadable design, for instance, that’s where you run into even more trouble because every 3D printer is different. You’re going to have even greater fit issues. That’s not what I would recommend in this case. Sometimes we say it’s cheaper, it’s easier to do a downloadable part. In this case, if you’ve got finished use, you should make the part.

You should be making it yourself. Certain slicing programs, let’s say Simplify3D for instance, has the ability to adjust its horizontal scale independently from the rest of its dimensions. That makes it easy. When I do threaded parts on the computer, I love using Simplify3D because I can have the parts be line-to-line between the threads. You take the one that you need to be a little larger intolerance and you change a little setting and it does it for you. That’s easy, but not every program is like that. It may take you adjusting your CAD file and experimenting to get it to work in your 3D printer.

What was the third thing that you were thinking about?

I think it’s about the opportunity in the market for what this person asking us a question may not realize.

You’re talking about hybrids products. It’s my favorite subject. I think hybrids are the way of the future because hybrids allow you to pick and choose between what manufacturing process and additive manufacturing are one of those potential choices. Do you want to mold something rotationally and then do you want to have a 3D printed part that matches up? Do you want to cast something and then 3D print a part that goes with it? The ability to do that allows you to choose what is the most cost-effective way? What is the fastest way? Sometimes speed is more important than anything. What gives you the best results?

This was also important because let’s say you want to print a big vase for a wedding, it’s your own wedding and you’re into 3D printing. You’re not trying to sell it and you designed this beautiful vase. You want it to be the centerpiece on every table and you’re going to customize it and have the bride and groom’s name on it or something personal on it. If you’re going to 3D print that entire vase and each of those vases are going to take 35 or 45 hours to print. Depending on how big it is, it could easily take that long. You can’t justify that. It’s either too costly if you’re having it done outsourced or it takes too long doing it on your own. What if you take an existing beautiful vase and you’re 3D printing a portion of it, an embellishment of it that has whatever that couple’s name is.

We did that for my cousin who’s closest in me to age is having a baby and she had her baby shower. My aunt bought these glass vases that had candies in them and they were part of the table centerpiece and they were favors for everyone to take home with them. We 3D printed a color ring around it, which we dropped on there and it had three little hearts for Amy, Vincent, and the new baby. It was beautiful. It was personal and it was colored to match the color theme of the baby shower, which we don’t know whether it’s a boy or a girl. It was a little more vintage looking, gender-neutral.

The point is FFF 3D printing is not fast. Let’s be honest about that. There are a lot of wonderful things that it does, but speed is not necessarily one of them.

There’s no way we could’ve made 50 because we needed 50 of them with the entire vase as a part of it. We made the colorings and as it was, it took an hour for each one anyway.

It took us the better part of an entire week printing all of these things off and on. It isn’t practical to 3D print the entire object every time. You don’t necessarily have to use 3D printing for the unique aspects of whatever this hybrid product is that you need it for. You can match that up with an existing off the shelf product or if you’re manufacturing your product even better because you can snap things together or have the opportunity to do things in different ways. There are many opportunities in hybrids. We’re just scratching the surface of this.

There’s also the possibility that a hybrid that you intend to make the full thing injection molded at some point or something like that. You don’t want to spend the money on the expensive part of the tool yet because you are test marketing the product. You may buy an injection mold that’s a lot cheaper or whatever for the larger portion of whatever it is and 3D print the more difficult complex part, which has a more expensive tool. You’re test marketing it, making sure that that thing is dialed in and right before you go ahead and do your final tooling.

I do think it’s even practical in the future having 3D printing used as a part of the mass-produced product. Doing the customized portion takes 0.5 hours or 1 hour to print at most maybe whatever’s needed. You’re traditionally manufacturing the other parts to get that economy of scale and efficiency, especially from a cost perspective.

This is exactly what’s missing in retail. Could you imagine a retail store out there with a line of products that are traditionally made mass-produced and on the shelf of a Michaels, JOANN, even a Staples? They’re there and then all you do is go over to the 3D printer kiosk and you say, “I want to put my nameplate on the rest of the triangular thing.” You go and have that part 3D printed while you’re waiting or shopping. It could be that fast.

In fact, I think Staples is already missing the boat because they have copy centers in all their stores. They’ve got 3D printers where they’re doing demo stuff already that they’re selling in a lot of their stores. That should be in the copy center and people should already be doing this.

The problem is that they haven’t conceived at the line of what those products should be and that’s the problem for them.

That’s the biggest gap. We’ve talked about it in other episodes that’s missing in the industry of 3D printing is that kind of content does not exist. Until it does, it’s not going to happen.

It is the ideal way to use 3D printing in retail. You should mix the parts. It makes a lot of sense. Materials mixing, fit mixing, hybrid mixing for cost reasons.

One other point, I know there are 3D printer manufacturers out there who are making their 3D printers from a combination of traditionally-manufactured materials and they are 3D printing. Some of the parts of their printers probably Airwolf 3D is the most obvious example of that where they’re making a lot of the parts for their printer. It does look good and it combines with the other materials they’re using well. That’s one little example, but it’s happening already and I think you’re going to see more and more of it.

If any of you have questions about parts mixing, any kind of technical, general, business design ideas, it doesn’t matter what you want to ask us. That’s why it’s called Ask Us Anything.

Keep sending them our way and go to our website. Every page has a little send voicemail button or you can send us an email at Info@HazzDesign.com. You can tweet us. We’re on social media everywhere @HazzDesign.

Thanks for reading and we’ll talk to you next time.