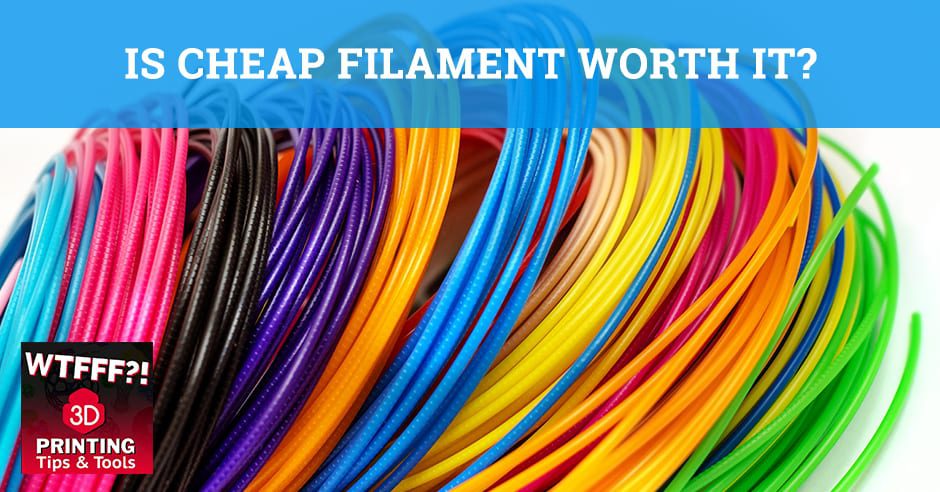 Is cheap filament worth the savings? Tom and Tracy Hazzard talk about some of the factors to consider when picking a source and price point for your filament. Sharing their tips on how to select the most practical filaments for your 3D print needs, they also point to some of their favorite PLA filament sources such as RioRand and Toner Plastics. Thinking about buying cheaper filaments? You don’t want to risk it without listening to this episode first.

Is Cheap Filament Worth It?

This is where we get asked questions over SpeakPipe link on our website which is the Ask Us tab on HazzDesign.com and talk into the mic of your phone for about a minute. You can leave your name, website and a way for us to get in touch with you if you want us to answer you personally, but mostly we’re going to try and answer these questions here if we think they’re relevant. The question is from Charlie in Missouri.

Charlie was asking us about the cost of filament.

He thinks $50 is steep for a spool of filament.

I understand that initial reaction because it’s the same that I had.

I had the same reaction because you spent $3,000 or so on a printer and you’re like, “I can’t use one filament so I’m going to buy five rolls.” The next thing you know you’re adding up dollars and you haven’t even printed anything yet. I thought that was the case too.

In reality for us though, after a year of printing and 2 or 3 dozen spools of filament later, the cost of the filament is insignificant as far as we see it.

If you’re thinking about it per print, it’s a different model. You have to buy an entire roll, but that roll is going to last you a long time. We go through a lot of white and a lot of gray because we use it for all our test prints, but you can find that one cheaper than the others. You can usually find that somewhere between $30 and $37 for those colors because they’re popular. I don’t think we’ve been through five rolls of white in a year and we print a lot of hours.

That’s no reason to skimp. To be honest with you, the $50 filament is probably worth it in most cases. There have been some we tried that I didn’t think were quite worth that dollar value but most of them are. There’s a real difference. When you get to the cheap filament, it’s cheap. We’ve had a lot of problems with them. We’ve had them where they have bents in them and they’re extruded unevenly.

They cause jams sometimes in some of our printers. The time that it takes to clear that jam is not worth the money I saved on that roll of filament.

Cheap Filament: The difference between a $30 roll of filament and a $50 roll is pennies per print.

It’s not worth the $5 or $7 saved. Once you find a material you like, it’s unimportant. The other problem that I have with the cheaper materials are they don’t watch their color lot well. We’ve had that happen where we bought a green color and we bought it again and the green didn’t match at all. It was the same color name and same SKU number that you’re buying but it’s not a match.

At that time, we were trying to print many of the same things. It was around the holiday

It was for our Christmas green stuff. It was disappointing to find that happened. The same thing happened with white. White was different from one lot to the next and that’s a big problem. If you can find one that marks their lot numbers, you should definitely buy that.

If you’re buying more than one spool of the same color, you want to make sure those lot numbers are the same. I don’t think many filament sellers identify a lot of information when they buy. They should at least be doing that in the background for you if you’re buying more than one roll even if they don’t show it to you on the website. We’re not in control of what they do.

Especially if you’re buying over Amazon, that’s difficult to know whether you get a split lot. I would think if you got it all together at once, it was probably from the same batch.

Something I want to point out about this filament costs issue. I don’t think every slicing software does this, but I know in Simplify3D at least, and I’ll check out some of the others. I’m not trying to put down anybody slicing software because there are a lot of good different software out there. I use Simplify3D more than some of the others. I know that you can input your cost per spool into that software and on each print. It not only tells you what length of filament you’re using in terms of meters or what weight you’re using in terms of grams or pounds, it tells you what your cost per print is.

Our angel that we printed out on the holidays took about 4.5 hours to print. If I remember right, the material cost was only $0.80. It was ridiculously low for what we did.

I don’t think it was even that much. It only uses 6.5 meters’ worth of filament.

Maybe that’s the total number of materials and all the consumables. The materials are not the costly part of printing, it’s the time and your design time that are the costliest parts. $50 a spool is worth it.

You get what you pay for. If you buy cheaper filament, you’re probably going to have a lot of aggravation and poor quality as compared to better filaments.

We paid and had some good filaments at $37 to $50 range. If you find something you like, stick with it. I hope this answers your question, Charlie.

Thank you so much.

Thanks and we’ll be in touch on our next episode.