What are some tips on how you can improve your 3D prints? It occurred to me yesterday when we were talking to Hector about the dialing in of the designs and how they spend a lot of hours getting the quality optimized on the printing, which we know takes a ton of hours, that It almost takes an equal amount of hours to the design time in our case. And even after we printed it for a long time, we learn new things and fix them. But I think it would be an interesting question for me to ask of you to help our audience and listeners, how to improve the quality of a 3D print. What is the attack process

Tom answers Tracy’s Question : How To Improve Your 3D Prints?

I think you first have to define what improvement is to you. Is it just speed because it is taking too long to print? Or is it quality of the surface smoothness and things like that? Is it having it come off the build plate and it’s done? You don’t have to clean anything up.

All of those are our goals. I think we sacrifice speed for the other two things. That’s the only thing we do. I’d like things to print faster, but I definitely sacrifice speed for quality and not having to put any labor into it once I take it off the build plate.

Once you get a print to print the way you want it to, certainly you can try to improve the speed. One thing you can do is decrease the amount of infill, if you can get away with it structurally and depending on what material you’re printing in. That will certainly speed up a print if your infill percentage is less.

But I don’t always start there. It does depend. In some recent test prints of some lampshade designs we are working on, I actually used 0% infill. The print took 20 hours as it was with no infill. Can you imagine how long it would have taken with infill?

Here is an issue of quality that you may not think about. It wasn’t just the appearance of the quality of the part as it’s printed, but it was the quality of when you put light in the middle and it acts as a lampshade. I didn’t want the infill to be causing a different pattern that you would see as it’s shining through. I wanted no infill. I just wanted the color of the filament showing through and to be as unfiltered or unaltered as possible. 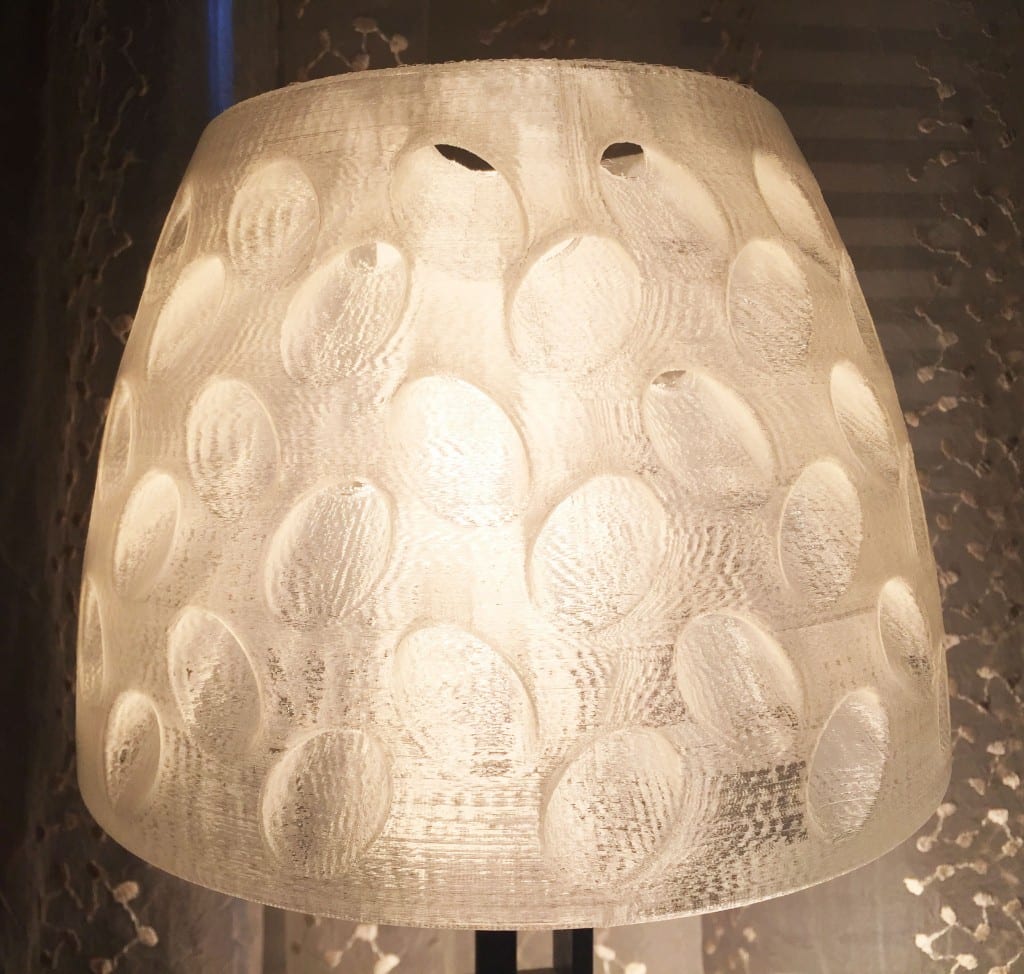 Infill is one of those things that you can dial in, and it can speed it up or increase the quality of your print. It can also increase the strength. If I’m making a toy for my daughter, I’m cranking that infill percentage up if not going completely solid because I want it to be as strong as possible. I also don’t want it to be porous if she is going to stick it in her mouth. I don’t want saliva getting in there. The idea of Vanessa sticking our 3D prints in her mouth scares me. They’re all prickly. I don’t want that happening. It’s not smooth enough for me. It’s not food-safe material. We don’t usually let her near the 3D prints. Our six-year-old even, too. So 100% infill is really good there.

Dialing in and improving the quality with printing things that need support. Here is an area where you can improve your prints over time. Let’s say you are using software-generated support material from your slicing software. Sometimes that stuff is hard to remove and leaves marks on the part, or there is just too much of it. It puts it in more places than you really need it; I actually find printing a lot of things that have circle holes on them form pretty well and don’t need support material, but if you put support in the whole print, it will put it in there. There are different programs.

If you’re not using a closed system, Simplify3D has a really good feature where you can put support only where you want it. You don’t have to have it anywhere.

But I have become a fan of creating my own support material because it breaks off a lot easier, and I can put it exactly where I need it. I usually make an arch. Think of the McDonald’s arches. When I need something to have support, it needs to be able to build and stand on its own and then it will help support the part of the object as it’s forming. To make an arch shape and have it barely touching breaks off very easily and makes it easy to do the clean-up at the end. It improves quality, and it prints quickly. I just extrude a circle shape along a parabola path.

You want to think of it as the least amount of support materials you have because you want to break them off smoothly. So you have fewer surface imperfections and areas you have to sand and sharp points and clean-up.

Another area of quality. If you’re willing to sacrifice time, there is layer thickness. The thinner your layers, the better your surface quality will be. When I start a print, I’ll do it at about 200 microns. It’s not the thickest I can print, but it’s a balance between printing thicker and getting decent quality to get a good read on if the print is good. If I want nicer, smoother quality, I’ll go down to 100 microns or even less. Thinner layers give you better surface quality for sure, but they will take longer to print.

What about changing its orientation?

You know those lampshades that you have been working on? Have you turned one upside down yet?

No, but I am working on that now. The first time, I printed it right-side-up in the normal orientation that you would use it. That made some sense because the lampshade is wider at the base than it is at the top, so when you print it that way, it will naturally be more stable as it’s printing.

If I flip it over 180 degrees, the top is narrower. It’s still big enough to print just fine. But we noticed that there were some lines across the part with some layers that formed. There were holes penetrating the lampshade, which were unsupported, and it had to bridge. I realized as I looked at this part that if I turned it upside down, there would be no bridging that occurs. The way the geometry is, it would have an easier time building layer upon layer and would turn it upside down.

The interesting part was the very top edge had a pattern of the way it finished off the top edge. It had a radius to it. It was very nice-looking. But I was thinking that you really don’t see that on a lampshade because it’s usually higher at the top than you are. This is meant for an overhead light or a ceiling fan. If we flipped it over, the part you would see was the bottom edge, which because it came off the build plate, it was a little rough and not as nice. Turning it over would give us that surface quality improvement as well, which is one of the parts you’d see. I like the idea of it.

You think about how a design can be ever changing. It’s never done. If you are waiting for the new computer technology instead of buying one now, it’s always faster tomorrow. At some point, you have to put a stake in the ground and buy a computer or you will never make anything. Design is a bit similar in that you can always improve it. But at some point, you have to print it and make it a product, something that is as good as it can be to that point.

This is a great thing about additive manufacturing. We don’t have to tool for it and put that stake in the ground. We can keep fixing it. You can keep making incremental improvements. Learn from what you’re doing and make little improvements, whether it’s orientation, the type of material, the temperature you’re running, the speed you’re running, the amount of infill, the way you’re doing support material, or the machine you use.

Our 3D-printed tie has been improved a ton in the past year; this thing has existed for a while now, and I have made improvements to make it easier to get off the printer and not have to do anything to it except break off a few pieces. I even made improvements to how it functions and looks.

Then interestingly we had a third party company, Voodoo Manufacturing, “print” it for us in some quantity. I was really impressed. They were the first outsource that has been able to do it with the same quality we require, and they have some different printer that we do: The MakerBot Replicator 2, and it prints it a lot faster at that same quality. That’s great and very exciting.

That’s the great thing. But don’t give up your printer first. Don’t switch your printer thinking it’s the problem with the printer. There are so many great printers out there. Different ones have different areas of technical features and benefits than others. It depends a lot on what you’re printing and the material you’re printing with and other choices. It’s not any one right or wrong answer. It’s what is the best fit for you.

We hope this gives you a starting point for how to improve the quality on your 3D prints and do that continual improvement process. Don’t give up on your designs. There is always something new you learn. You should go back to some of the old ones and try them again, see if you can get an improvement.

We could do 20 different episodes on different ways to improve your prints. These are just a few suggestions. They are probably some of the best ones and the ones that will make the biggest improvements for you. We probably didn’t mention a ton of them, but we can talk about them another time. Hopefully this will help you for now.