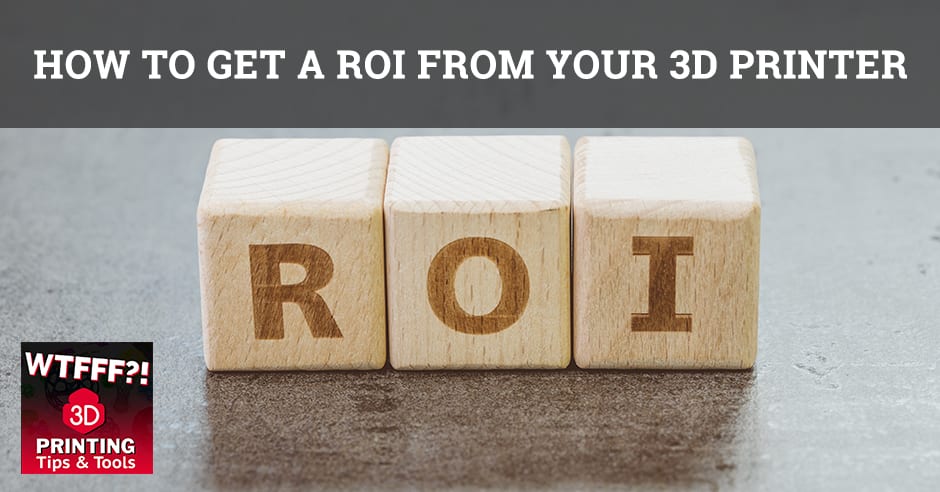 Getting a return on investment from your 3D Printer to recoup the actual costs or even the time it took to build 3D print and 3D print design skills is important to you and your business. Tom and Tracy Hazzard discuss some ways to make money with your machine and pricing your finished product. Whether you are a hobbyist or not, there are many ways you can get ROI from your 3D printer, but make sure you are not handling more jobs than you take.

How To Get A ROI From Your 3D Printer

I like this question because it gets at one of the things that we are trying to help people understand who are new to 3D printing.

How are you going to make money somehow?

How are you going to get a return on investment from your investment in a 3D printer if you’ve chosen to invest in one?

The obvious way is skill-building for certain people, but it depends on what your job is. As designers, we looked at the return on investment in our printer as we built skills, which lets us offer an expanded amount of services. We didn’t expect to make money off of using our printer, but a lot of people do.

We’ve found there are ways that we can make money off of the printer. We have used it for some clients making prototypes right here. It certainly has sped up the development process as we could make a physical model of it right here, even full-scale models for some small products.

Subbing it out in terms of using your 3D printer as a revenue source is a way to get a return on investment. I’ve heard of a lot of people joining a 3D hub. You don’t know how many jobs you’re going to get over that. It’s still low at this point. I haven’t talked to anyone who’s done so much that it’s all they’re doing yet. They’re not making a living off of it, but they’re doing some incremental good business. They’re also turning away a lot. You have to look at that way. It’s not because they can’t do it. It’s because the file that they’ve been given to print isn’t good enough.

That’s part of our weakness that we keep talking about service printing and some of the problems with that. You probably handle a lot more jobs than you take. You have to keep that in mind in your pricing and your costs because that’s definitely a factor, that quotation and review process, how much you’re going to go through and how much time is that taking. Are you recouping that with the amount of jobs you’re printing? That’s a good important point to think about when you’re pricing your services.

What we learned from re:3D when we interviewed Todd Ronan was that when they sell every one of their Gigabot printers, they recommend to their customers that they join 3D Hubs. Part of that is because they have an unusually large build volume and not every printer has that.

It’s a unique thing on the Hub. From what I’ve seen so far on the 3D Hubs, and they put out a trend report on 3D Hubs, I haven’t seen any two-color printers on there. If you happen to have a two-color printer and a large format, those are probably a premium.

ROI From 3D Printer: Every print you do is going to recoup some dollars.

Especially for doing complex things that need support that you could dissolve even if it’s not a two-color print.

Let’s face it, you spent $3,000 on a printer or maybe way less, but it doesn’t matter. You spent that money. It’s gone and you learn how to 3D print. Every print you do is going to recoup some dollars. Why not buy your next printer?

There are ways to get a real return on investment in your business, depending on what your business is. There are probably many different ways to do it. It’s going to take time before you realize that return on investment. It’s probably going to be 4 to 6 months before you’re operating smoothly and properly where you could be getting maybe that full return on the time. There are other ways you could do it. Even for us, we’ve made Christmas gifts with it. We’ve made shower gifts. We’ve used it for other things outside of our normal business that we’re getting some return on that at least or at least we’re taking advantage of it.

We made some charitable donation items and things like that.

There are probably many ways to do it, but it’s a hard question to answer. It depends if you’re a hobbyist or in some sort of business where you do prototyping, or if you’re interested in buying, or if you’ve bought a 3D printer because you’re intending to print something to sell it.

We can’t clarify this question with the person who asked it because they didn’t leave their information on our voicemail so we can’t get back to them. When you leave us a message, either leave us your voicemail, website, way to get in touch with you because the best thing for us to be able to do is to follow up with a question. We seem to be getting a lot more anonymous questions. We’d love to play your questions. Ask us more. You can do that over at HazzDesign.com. There are buttons and tabs at the top of the page. There’s also send voicemail on Facebook and you can tweet us. We’d love to get in touch with you and hear from you any which way.

I hope that shed a little bit of light on potential ROI for making that investment. We’ll try to answer things more specifically if we get a little more information.

This might be another long episode with the right experts. We’ll go out there and try to look for the right kind to address various parts of this question in the future.