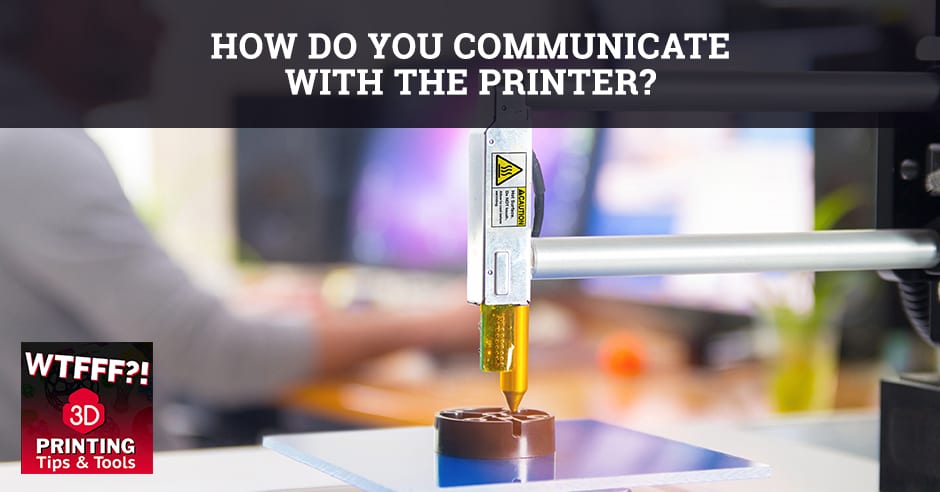 How do you control and communicate with your 3D printer? Tom and Tracy Hazzard answer another 3D printing question, and this time, it is all about interacting with your printer to get your print on the way. Among the common ones you can rely on are the WIFI and USB ports. While discussing this, Tom and Tracy also tackle other low-cost alternatives. Understand which ones are for you as they share their preferences and the difficulties they find with each of them.

How Do You Communicate With The Printer?

Almost anything. We’re amid our tech accessory week. We’ve been trying to mind your questions from our Ask Us Anything on our website HazzDesign.com. We have mined them for some questions that relate to how do we do things related to the printer or printing process. This episode’s question is, how do you communicate with the printer?

There are many ways you can communicate with the printer. Let me go over that first and then I’ll let you know what we prefer to do. Some printers have Wi-Fi capability. You can wirelessly send prints to the printer, but that’s more in what we call the closed printers like the MakerBots and things like that. Many more of the open-source printers don’t have Wi-Fi, but they almost all have a USB interface where you can plug your computer directly to it. That’s the most direct way you can communicate with your printer to initiate a print. A lot of printers also have either a place where you can put in a USB flash drive or a microSD or SD card.

We should talk about that because we had some unsuccessful interactions with the microSD.

A lot of open-source printers use this little LED interface with a small wheel called a ViKi. It’s a common RepRap part out there. It works and it gives you the capability. I’m not going to say it doesn’t work, but I found putting the microSD in there was not always easy. It’s easy to get that card a little crooked, misaligned and then it doesn’t read properly. I also find that wheel interface and that led interface to be confusing and cumbersome. If you’re a new user, you’ll be scratching your head a little bit over that one until you get to learn its idiosyncrasies. It does work but it’s just not my favorite.

We tend to use a USB drive.

Communicating With 3D Printer: A lot of open source printers use a VIKI, which works but putting a card in there is not so easy.

I prefer a printer that has a USB port on the front of the printer for a flash drive. I don’t like to hook up my laptop directly to my printer. My printer is just in a location where if I’m hooking my laptop up to it, I’m either holding it in one hand doing other things with the printer or I’m trying to sit near it and put it in my lap.

You also don’t want to keep it hooked up to it in any way, shape or form because you’re using it to design. You need to keep productive. That doesn’t make a lot of sense for us. There’s a new product that we’ve been testing and it’s from MatterHackers who we’re going to interview. That should be interesting. They have a product called MatterControl Touch, which is a touch tablet that you hook up.

You leave this tablet plugged into usually the backside of your printer where there’s a permanent USB connection that you would use for your computer. It essentially stays with the printer. It’s like giving your printer a brain, which is true. It’s making your printer a lot smarter and easier to interface with.

It’s a little pricey. It’s $300. If you’re just starting out, test out the way that your printer works in terms of the USB drive and make sure it’s something that makes sense for you, that you feel like it’s cumbersome to attach your laptop. We’re intense printers and it makes a lot more sense for us, but it’s not for everybody.

Before the MatterControl Touch, I primarily print to a flash drive and stick it in the front and didn’t have anything else hooked up to it. The MatterControl Touch lets me control the printer more when I’m not printing for adjusting things, calibrating it and things like that. I like that but for printing, I find it easiest to print the file, put your G-code on the flash drive and plug it in front of your printer, select print and it goes. That’s how we communicate with our printer.

Who knows, they’re going to come up with something new next? It’s always changing. That’s another reason why you need to keep asking us questions. You can do that over our website at HazzDesign.com or you can do it over our Facebook page. We’re also everywhere on social media @HazzDesign.

Thank you and we will talk to you next time.