Happy Mardi Gras! I always ask how come you never 3D print me anything, but it’s really not true. You did make me something for Mardi Gras. Not for Valentine’s Day, mind you, but for Mardi Gras. We had the opportunity to be on a Game of Thrones Mardi Gras float in the parade in San Diego this past weekend. And you made me a Melisandre necklace. There will be a picture of me in my costume with the necklace. You’ll all harass me, those serious Game of Thrones fans, but I didn’t go all out because we were sitting on the top of a double decker bus. The float is like a bus. Most of what I was wearing wasn’t seen. Plus it’s darn cold at night right there near the ocean in San Diego. So don’t harass me about that. Well, cold compared to most; the people in the North are going to be commenting and giving me heck about that. It wasn’t snowing, but it was cold enough that you have to cover up.

How Come You Never 3D Print Me Anything?…Well, I do!

You made me a Melisandre necklace. Yeah, I had some fun with it. Making a necklace all in one print (actually, it was two prints due to a color change). If you google “Melisandre necklace” on Google Images or Pinterest it, you can see a lot of the actual ones photographed that have been used as the jewelry on the show. You see a lot of people in the maker and craft world who have made their own versions and posted images of them. You can find them on Etsy, too. I’ll have photos of it on Tracy and others of it by itself.

We decided to go with a natural PLA material. The bronze was messing up the machine. It was driving me crazy. We had this nice gold/bronze one that was the right color, and it would get 30% through the print and just stop. So we were running out of time, so we ended up with natural, which wasn’t our first choice. But we did do a translucent red for the gem in the center. I think it came out pretty well. It was dark, at night. People had a lot to drink and were throwing beads. It didn’t matter for that purpose, but it was fun. 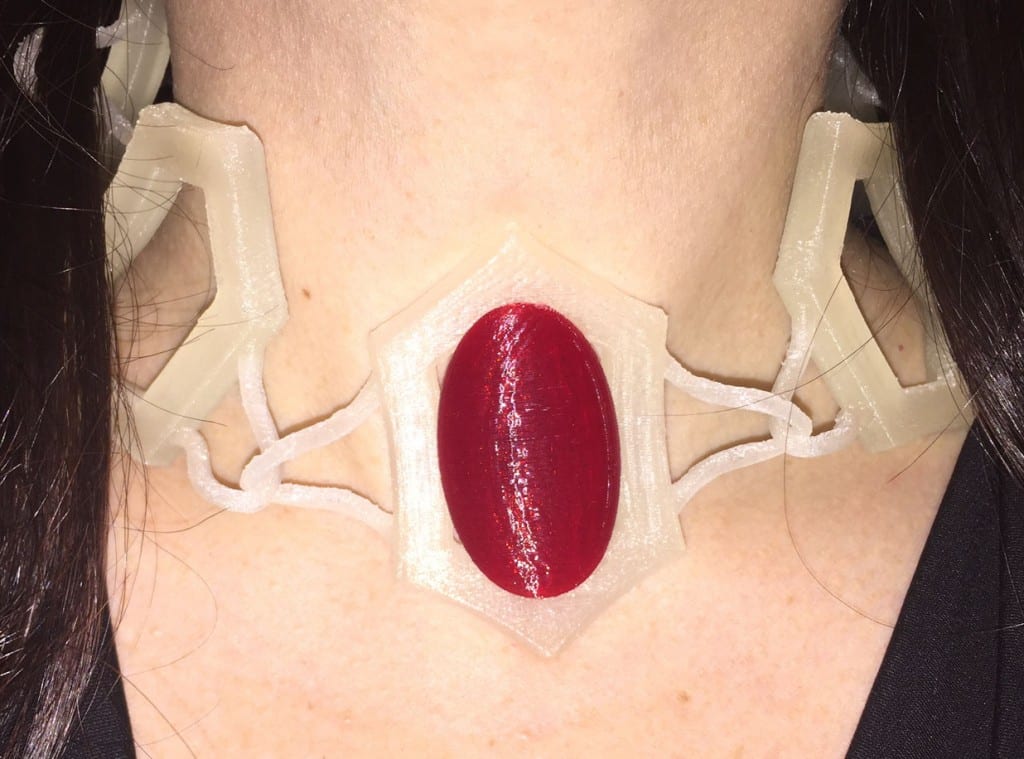 You’re going to dress up for a costume party, and you need the right accessory. This is a good example. You can make it. This one didn’t take me all that long. It took me four or five hours in terms of modeling, printing, testing, fixing errors, changing the model a bit, and printing again. Maybe three generations of prints. Not that bad.

It’s a little prickly. I don’t know how else to say it. The plastic was stiff. It could have been nice if you had made it out of flex. I actually did have some thoughts about that. I was thinking about it and realizing that I thought it might bother you. I thought it was going to bother you more than it did. I realized it didn’t bother me when I wear my tie, but then I realized that I have a shirt that is between me and the plastic, whereas I had a bare neck. I agree. A flex material or filing it more finely would make it more comfortable. This is a choker of a necklace, which I don’t really love. That’s not my thing. I don’t like things that close to my neck. Well, you wanted to be Melisandre. I know, I chose it.

If I was taking it seriously and wanted to wear it again, I would have it printed in metal, and it would have been much better. I could have done that, but it’s not that important. It was just for fun. We didn’t have the time in this case. Maybe I’ll wear it again after Halloween. The girls will think that’s weird; they won’t know what it is. Why is Mom dressed in red?

The next thing I’m going to make for you is probably the unique watchband/bracelet for you to wear to events. That’s one place to start. That would be great. I have other things to do, too, although they are more ambitious projects, so I think the watchband will be a great start. So you can’t say, “How come you don’t print me anything?” anymore. That was our question.

It’s a good little project. If you have any questions when you see the pictures of how we did it, again, it’s one of those things that I printed all in one on its edge so I used the least amount of support material and it all forms the way we want it to. It’s complicated. Making something that’s linked together going around your neck and has 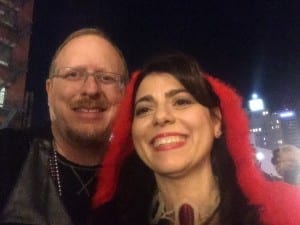 enough flexibility and with a chain that we could adjust for tightness. But quick little project. Hope you all find this interesting.

Can I predict the comments? The comments are going to be: “Who is Tom supposed to be?” I can hear that right now. It was not clear. I am not going to put up a picture of me. But I am. Uh-uh. I think people should see how much fun we had. There will be a picture of you. I’m going to stick it on the blog post; I will slip it in, I promise. I’m changing your privileges on WordPress.