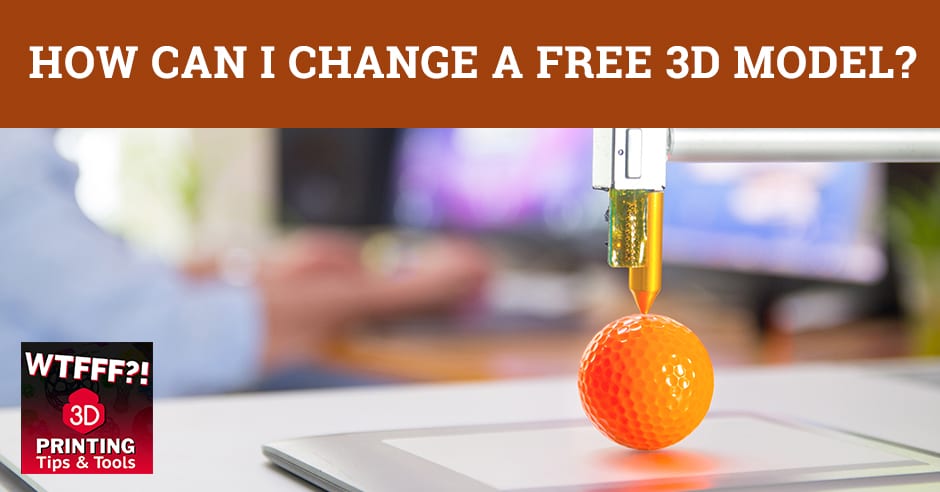 Some beginners in the 3D printing world tend to start with a free 3D model to test the waters. However, these free 3D models often come with their own restrictions. A listener of the show asks, “How can I change a free 3D model?” Tom Hazzard and Tracy Hazzard answer and offer some advice on how to modify models that are pre-made from a file-sharing site. Tune into this episode to find out.

How Can I Change A Free 3D Model?

Anything 3D printing and design.

Especially now with it coming up on Christmas and there are probably a lot of people that are either giving or receiving a new 3D printer.

I hope it’s the holiday gift. We passed Hanukkah and I hope there are a lot of Hanukkah gifts that way as well.

We’ve had a question written in via email from a listener who purchased a 3D printer and he’s a fan. He’s listening to the show and he’s a complete beginner. He says the first thing he wants to do is download a free 3D model off of one of those file-sharing sites that’s a Star Wars related figure. For now, we’re going to accept the idea that that file is freely distributed. We’re not going to get into that copyright discussion now.

It’s a different subject that we’ve talked about before. If you’ve tuned in to the podcast or are aware that we’re going to assume that model is freely distributable. He wants to modify it to put his son’s name on it. The actual letters of his name, which is William. He wants to put it on there, and he doesn’t know how to do it. He’s asking, “I want to do it. My son’s birthday is coming up. How do I modify it? How do I do it? Can it be done?”

I’ve got to say, starting to answer the question, this as a new user who is a beginner, especially if you don’t have any CAD file experience, this is not the simplest thing to do. Printing it was one thing that you may have enough challenges with, but we’re talking about combining 3D models together. When you download a free file off of a sharing site most of the time, that’s going to be an STL file, which is a difficult file to edit. It’s meant to be an end-use file that gets sliced and sent to a printer or prepared for print. It’s not meant to be a file that you manipulate and do a lot of things with but it can be done.

You can rescale and do a few things.

There are certain CAD programs that will allow you to subtract portions of that called Boolean Operations. They’ll allow you to add things to it and combine them into one model so you can do things to modify a 3D model.

These sound like more advanced things than beginner things.

Dealing with text is not necessarily the easiest thing to do, three-dimensional text, letters, and words in 3D models. It certainly can be done and we’ve done it but the scale of that text and we’ve talked about this in the past. To scale that text, the line weight thickness to it. If the edges are hard and sharp or they’re rounded over, all those things can affect how well the text is going to print and the orientation you’re going to print it in. All these things will come into play. Overall, the first thing I’d like to say about this to help answer this question is if you’ve got a deadline like your son’s birthday coming up in a week, you have a day job and you’re trying to do it in the evenings on the weekend, you may need to have a backup plan for a gift for your son. It is something that is going to take you quite a bit of time to learn as you do and figure out how to do it. We can give you some pointers and point you in the right direction, but it’s still going to take a while.

Wouldn’t it be easier if he found a system like using 123D or something like that where you could do letters? You can type letters in there and you can extrude them into dimensions, pick their scale, and everything like that. To do that, to do the name William, and create something in which you would glue, mount, adhere the figurine to it or it to the figurine, create a base, essentially, and put the figurine on it. I don’t know because I don’t know what it looks like.

An STL 3D print file is not meant to be a file that you manipulate and do a lot of things with, but it can be done. Click To Tweet

Wouldn’t that be faster in this particular case from a learning standpoint?

First of all, you’ve got to find a CAD program you’re going to use and I’m presuming you’re not going to want to spend $2,000 or $3,000 on a high-end CAD software so let’s talk about the free ones. You can use Google SketchUp, Autodesk 123D, you can even go down to Tinkercad. They’ll do the basic block forms and letters. You don’t necessarily even have to go 123D, but there are lots of free CAD software out there that you can use. You could make a base. Let’s say it’s a square shape from the top and you’re going to lift it up 3/4 of an inch from your build platform.

Let’s say a 2×2 inch square and 3/4 of an inch or so top. You can then put a name and either build it out and extrude those letters out from it or subtract them from the edge of that if that’s what you want it to become if it was like a trophy or something. You can do that. You could even create that as an STL itself and join that with the Star Wars figure STL and make it one thing to print. You don’t necessarily have to glue it together but you certainly could. It’s easier for you to print one by itself.

There’s nothing wrong with PLA and ABS. These are materials that are most common for FFF 3D printing. You can use Krazy Glue and glue them together, it will work, so sure you could do that. It’s a great exercise to do this and learn. I am worried about someone doing it and expecting to do it in 48 hours or even 5 or 7 days here. You’re going to learn a lot in this process when you try to print that. Printing those letters in certain orientations is going to work better than others.

I would think most figurines that people are designing as free models that you can download are intended to be printed the normal orientation, but printing those letters of the name may not be, so now you’ve got a conundrum. Do you print separate parts and put them together or do you then apply the name in a different way? The way that that lettering will print the fastest and easiest if you print them on the top surface instead of on a face edge.

If you’re putting it on a desk or a bookshelf and you’re looking at it from a distance, you probably would want to put that name on the vertical face that you can see as you’re looking across the room. Printing it that way, it may require a lot of support material to support those letters and it’s challenging. How do you get those letters to print cleanly and the best that can be? If you put them on the top face instead, it may not be the most desirable location for it to be but that’s where it’s going to be the easiest for you to print it, especially as a new user and not have to deal with some of these orientation challenges.

This is an interesting question and it’s definitely a place where there are also a lot of online tutorials that will walk you through doing lettering, printing sculptures, and all of these things. Those are some places you should look at as well.

I also want to make mention of certain other software utilities that are available. If you are interested in using 3DPrinterOS, let’s say as an example, to run your 3D printer, they have some apps in there that deal with lettering and doing exactly this type of thing that would modify an STL file for you. If you download that Star Wars figure, if there’s enough room on it where there’s blank space for you to put the name, they have a utility that will add lettering to an object like that. They export a modified STL file that you can print, but that’s again, a different software platform you’ve got to learn.

You’ve got to become a member on their site and all that. None of the others that do it too. We know that MatterControl was working on it. I had a simple app for doing similar things like that. It was more of a teaching tool than a real functional app at the time when we saw it. Maybe it is improved by now but there are some utilities and apps, mostly apps, that let you do this. You can try some of those as well but you are still going to have some of the printing orientation challenges.

This is all the more reason why you need to get yourself into a course or join a club like i3D.club which is our friend John Bokla’s. He does a great job.

He’s got a lot of good video tutorials.

You walk through a lot of these things, which all of those skills will do what you accomplish once you’ve learned them all step-by-step in the right order. You want to get yourself into doing that as soon as possible. The faster you do that, the more likely you are to be able to do these kinds of things that you’re desiring to make so badly.

Free 3D Model: When you download a free file off of a sharing site, it is going to be difficult to edit because it’s meant to be an end-use file that gets sliced and sent to a printer or prepared for print.

It involves so many steps in the design process and the processing of files that you need to take those steps and make sure you’ve got them in the right order first.

You need to go through it first to make sure you understand how to do it, what some of the pitfalls are and how to turn that into a lesson, a part of a curriculum, or a challenge. It’s going to depend on a lot of things. You’ve got to make some software choices. That’s probably the first one

We hope this helped you. If you have other questions about design, 3D printing or about anything, you can ask us anything anywhere on social media at @HazzDesign.