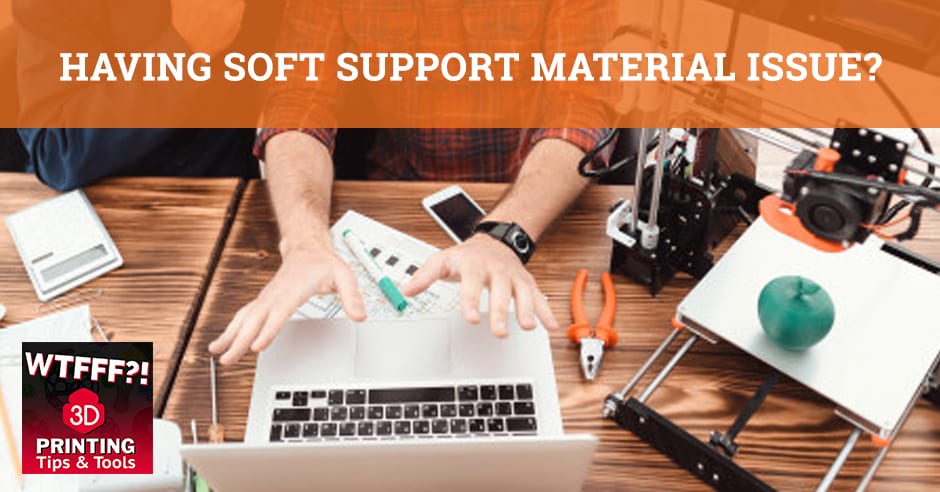 Questioning soft support material like PVA and flexible filaments is a good idea before you experience major jams and clogs in your printer. Today, Tom and Tracy Hazzard answer the question – “If PVA is too soft for my machine, what do I do?” They developed a part and some techniques that help deal with soft materials in a hard space. Listen further and learn from their experience as they help you in your 3D printer woes.

This is the Ask Us Anything segment. We’re wrapping up our tech accessory week, talking about how you’re interfacing with printers and what kinds of things you’re doing. Our question ties into some of the other foundational things. The question is, “PVA is too soft for my machine. What do I do?”

A lot of printers have trouble with the softer filaments, especially Bowden printers, which are the ones that have those little white tubes going over the top if they’re being pushed from the back of the printer up, over and down in the extruder.

Maybe we should start with what PVA is.

PVA is Polyvinyl Alcohol. It’s the same material that glue sticks kids in elementary school or preschool use. Its Elmer’s glue.

It’s like a glue stick you put in a glue gun. That’s what it looks in filament format. It’s skinny.

It’s soft and the PLA or ABS material that you’re printing with is quite rigid. They’re different but PVA is dissolvable and water. That’s one of its best and friendly characteristics, especially for the home user.

Especially if you’ve got inset sections where you don’t want to have to try and scrape support material out of there, using the PVA is great for that positioning.

You stick it in water and an hour or an hour and a half later, it dissolves. We have had some success using PVA. On the printer side of things, if your printer has some adjustments for how firmly it grips the filament like the spring force, I tend to back my spring force off a little bit so it doesn’t completely crush the softer material. I find that helps and also the speed with which you retract it. If you slow that down a little bit, that can help. Also, as long as there isn’t any space for that soft filament to move.

It’s got a lot of play in and around the nozzle area so it gets stuck in places.

After that wheel drives the filament, after it pushes it through, there was a lot of play where it could move and get jammed up. I’ve 3D printed a fitting that doesn’t let it move.

It’s a tighter funnel than what’s there. It can’t move very much. That made it print much easier. There are alternatives to PVA if you’re dissolvable support. Let’s say no matter how much you try on your printer PVA is too soft and you can’t get it to work. What can you do? We asked this question of some people that we think have a lot of experience, the people over at MatterHackers and asked one of their technicians, “Can you use HIPS which is another dissolvable support material with PLA?” We primarily use PLA because we’re in a home office environment. They didn’t know the answer to that question. They weren’t sure because HIPS dissolves in deliming, which is a detergent material.

They didn’t know if that material would attack the PLA as well as the HIPS. They tested it and took a bunch of PLA parts that have been printed and stuck them in deliming for a couple of days and pulled them out. By experimenting, we found it caused no ill effects to PLA printed part whatsoever and dissolved the HIPS. You can use HIPS with PLA, but HIPS is most commonly a dissolvable support material people that print ABS use because the temperatures and properties are most similar to ABS. There’s certainly no reason you can’t use it with PLA as far as what we found anyway.

We hear there are some new materials coming out all the time. I’ve been trying to keep up on it, but it sounds like new support materials are coming out that are hard PVA. I’ve heard that there’s a more rigid PVA coming out. We’ll be interested to see that. When we have a chance, we’ll try it out and we’ll let you know about that.

I also want to mention those tips for how to get that softer PVA to run through your Bowden printer is also our good tip for any soft material. If you want to print with soft PLA or some of these softer and more exotic flex materials, it’s the same tricks of backing off the spring tension on your feed motor and making sure it can’t move around after it gets pushed out. Those will help you with those materials as well.

Another thing and this is more technical, but we intended to make our own self support. We design in support so that we don’t have to do a whole bunch of let the machine generate the support which can sometimes be too much.

It can take a long time and sometimes it’s hard to get specific control for that purpose. We can put some photos up on our website showing where we’ve created support specifically for a part and not use the support function within the slicing software.

It eliminates the need of having to use PVA at all. We also create our support so it snaps off easily and it’s easy to remove, which you can’t always control with the machine’s version of support.

I hope that has answered the question. Feel free to ask us any follow up questions if there’s something else we need to address about that.

If you want to see photos or something else, feel free to shoot us that in both the comments or anywhere. You can do it on our website at HazzDesign.com.

Thanks for tuning in.