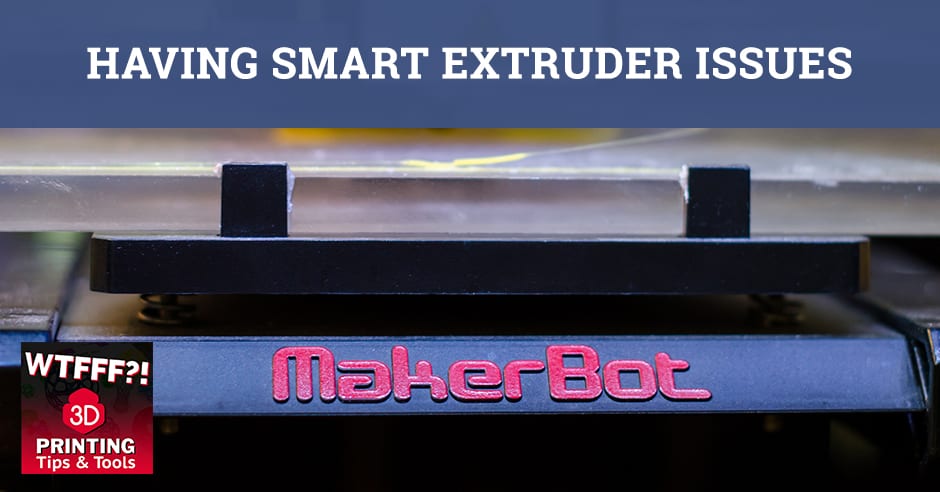 Smart Extruder and 5th Generation MakerBot, without doubt, work hand in hand to produce quality 3D prints. However, it has been in hot water because of some critical issues. In today’s Ask Us Anything, hosts Tom and Tracy Hazzard tackle the smart extruder issues with the MakerBot. They share their year-long journey with the Smart Extruder as well as their thoughts on its life span. Want to know the reasons why Tom and Tracy do not have issues with their Smart Extruder? Then don’t miss this episode!

Our question is anonymous. You can go into our HazzDesign.com website and you go to the Ask Us tab or you can go on our Facebook page at Hazz Design as well. You can click on our SpeakPipe button and you can ask us questions. You leave us a voicemail a minute long. You don’t have to leave your name. You can be anonymous and ask us a minute-long question or up to a minute. Our question is interesting.

It’s asking about the Fifth Generation MakerBot and asking if we’ve had a lot of Smart Extruder problems.

I see why they want to be anonymous. I can understand that. There’s been a lot written about the Fifth Generation MakerBot printers and problems people have had with Smart Extruders. Some people had a tremendous amount of difficulty with filament jams.

I don’t know how we managed to escape it. We got our Fifth Generation one, the early ones they were shipping out. We got 450 hours on the first Smart Extruder. That’s one thing that a lot of people don’t know and maybe that’s part of the problem. They expect a Smart Extruder to last about 150 hours.

They being MakerBot. I was shocked to learn that.

That seems low. I’d be a little annoyed if we only got those 150 hours out of our Smart Extruder.

I would have been disappointed. We did buy the MakerBot printer without asking that question first about how long is the Smart Extruder expected to last, especially since they emphasize the fact that it was replaceable.

Until that point, we’ve had a great experience with our Smart Extruder. We got a replacement and we got another long period of time.

At least as much.

It’s probably about the same amount of time as that Smart Extruder, and all the time we’re reading about all problems people are having.

It’s puzzled us as to why we don’t have the issues. We thought maybe our environment is a lot more stable here because we’re in California and it’s dry. Maybe we don’t have humidity issues because some people had mentioned that as being a problem. We ruled that out as being an issue. We don’t see it.

The reason that we realized it must have been a significant problem is when MakerBot got in touch with us because we do have their MakerCare Protection Plan. It’s like AppleCare if you’re a Mac guy. It’s a warranty program. You pay extra for it when you buy the printer. We got a message from MakerBot support that they wanted to replace our Smart Extruder.

We got two new ones because we had ordered two originally. We had the original one in the machine and our replacement one. They gave us two back and all of a sudden you wouldn’t believe it was running well.

It’s continued to run well. They’ve made some improvements to it. It’s all under the hood. You can’t see what’s going on with it, but there are a few different behavioral characteristics.

If you’re having problems, you should get in touch with them because they’re trying hard to make it right. They’ve done well from a customer service standpoint.

To the point where I’m wondering how they’re making any money on this because they replace these expensive parts quickly.

It’s a company that stands behind their product. That’s a good thing.

You should get in touch with them. If anyone else out there has questions for us, HazzDesign.com is our website, our Facebook page, our Twitter. Send us a question anywhere.

Go to the Ask Us page and click that button and leave us a message or drop us a note or a review through one of our other media contacts.

Thanks and we’ll be back in touch again on the next episode.