In the near future, 3D printed drugs will be sold in your local market. In this episode, Tom and Tracy Hazzard talk about this innovation and share their thoughts about how it can impact society along with its pros and cons. The breakthrough of drugs printed through 3D would be monumental, paving the way to cheaper medicines and medical supplies and allowing doctors and scientists to customize medicines with ease. Tom and Tracy believe that this can really make everything better and faster.

Although not quite ready to be available from your local CVS, 3D Printed Drugs are moving from the world of fantasy into reality. Talking about two articles that speculate on how 3D printing will be used in the medical field to make and distribute 3D printed drugs in the near or maybe not so near future. The first article discusses issues using 3D printer for at home prescription creation aka, 3D printed drugs, but also how 3D printed drugs allow for faster absorption of the medicine. The other article looks at a study that used 3D printed drugs as a way to treat acne with a topical 3D printed “mask” made from a type of prescription filament.

Talking about 3D printed drugs today because there was an announcement about the epilepsy drug, Spritam. We got some questions about it from a friend of ours who has an epilepsy awareness non-profit organization. She wanted to know if this viable? Is this really going to happen? The thing is that it is really a great use of 3D printing for what they are doing. It is a layer by layer assembly of the drug without compression on it. I guess drugs are normally pressed and molded. This particular type is in a capsule. It is like an aspirin. It is normally made by being molded. If they can do it layer by layer without compression, then the thin layers of it dissolve much quicker and that is a big issue; the speed of getting it into your system when you get that epilepsy is important. 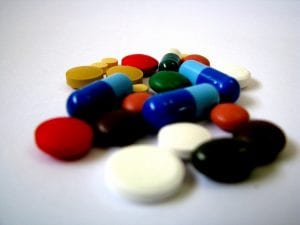 Pills made in the traditional molded way. |Pills by Victor

I read about printing drugs with negative spaces, so that when the pill goes to your digestive system and your stomach acid breaks it down, you get a lot more liquid flowing through it. You can dissolve the pill a lot faster that way. It delivers into your body faster and it brings up all sorts of interesting possibilities and of new ways to program drugs, not just chemically, but structurally in order to achieve whatever the real important goal of the drug is. It is fascinating to me that a structural possibility with 3D printing is possible.

For this case, they are doing a thin layer of powder and then they are doing a pattern droplet of liquid. They are combining it in a way that is very measured and unique. The powder in the liquid bonds the materials together at a microscopic level, when we talked to them about the bio printer, the idea that you could use various compounds and different materials was very important. This opens up the possibility of using different types of materials that are a much better delivery system other than being able to deliver it in a liquid form. You can now do that.

It is a fantasy to think that you’ll be able to make 3D printed drugs at home. I don’t think that they intend that because this company, Aprecia, has developed this ZipDose technology to make fast release drugs of all kinds. They have an exclusive worldwide license for the pharmaceutical application of this 3D printing technology. They have also raised $35 million earlier this year. They intend to be doing this. Speed release is the first area at which this is viable. It is being talked about the same time with all of these wonderful advancements physically and chemically of drugs and what 3D printing can do to improve pharmaceutical effectiveness which I think is fantastic.

Being able to make 3D printed drugs allows for better control when making half doses or quarter doses. With my grandparents, they would have their drugs and they would cut some of those pills in half, not very precisely either, for when they needed a lower dose. I think that is fantastic being able to do more specific measured doses with 3D printed drugs. Even if there are certain drugs available in a 20 mg pill size, doctors are prescribing those to what is the closest dose that is closest to your body weight, size, or age. There has been a lot of talk about how people can print drugs at home. I just think that will not happen in our lifetime, and I’m not usually a cynic when it comes to the 3D print industry, but I don’t see 3D printed drugs happening for at home use. I just think it is ridiculous, so many regulations to get through with assuming that you are only going to make 3D printed drugs for yourself and not sell them to others? I’ll be surprised if that happens.

I could see a case in which, though, where you have compounding pharmacies. They can be doing these things. Pharmacies in a hospital can be making 3D printed drugs right there tailored to meet their patient’s needs. I do think there are a lot of cases where you need that, just like when you treat your kids who are having rare diseases and it’s just not viable to be manufacturing the prescriptions and it becomes un-affordable for the families who need it. If you can 3D print them in small batches, you could really cut those costs down from a manufacturing standpoint.

The inventory requirements and all of those are not as hefty with the manufacturers. This brings the cost down. It simplifies a lot of the manufacturing and production pharmaceuticals for the pharmaceutical industry. They would not need to be producing as many specific pill sizes. They could be producing more of just the raw material that would become a pill. It would change their production to more of a raw material supply than an end product supply.

3D printed nose “mask” to deliver topical acne treatment was made from a 3D scan. | Image via http://3dprintingindustry.com/

It would be pretty interesting. It might speed up delivery of some drugs if you don’t have to worry about individual packaging. There are also other cases of 3D printed drugs in use in 3D printing that is medically adjacent just like acne. There is a lot of money spent on solving that problem, same thing as like hair loss with Rogaine. They are creating a dressing system, with Ninjaflex actually, this dressing is interesting in that is similar to a Biore strip. They are loaded with salicylic acid, which is also in aspirin. It is like a patch that helps you to treat the acne. They think that this could be a way to deliver the drug, just like with the epilepsy drug where they are dropping it on powder, this method they are dropping it onto like a patch.

You could also do nicotine patches, or this method could help burn victims too. There is a lot of broad use to that. They are using bio-compatible polyester which has been used in tissue engineering for a long time. NinjaFlex is often used in bone implants because it has high strength and rigidity. They did say that it is not actually very well on this acne trial, it is not holding up to that because of the acid itself. It was reacting negatively on it, but it was one of the first things they tried because it was used in the medical field before.

The idea of drugs, creams, and patches and being much more tailored and much more suitable to our body and to how we might react to it, would be really interesting. We are not medical professionals or in the medical field, but we appreciate the potential here. The more 3D printing can do to help across different industries, the better off the entire industry would be. I was even impressed with the mechanics of the bio printer and how they used some different components and different motors as well as ways of driving the moving parts in that printer for the particular needs of bio 3D printing.

They have done new things that the rest of us can learn form and apply some of those things to other facets of the industry. It is all going to push things forward and make new advances in helping make everything better, faster, more capable, and just do better things. I am a big fan of this for sure. It is cool stuff. The whole idea of customized and 3D printed drugs makes so much sense. If 3D printing is allowing that, then that is fantastic.