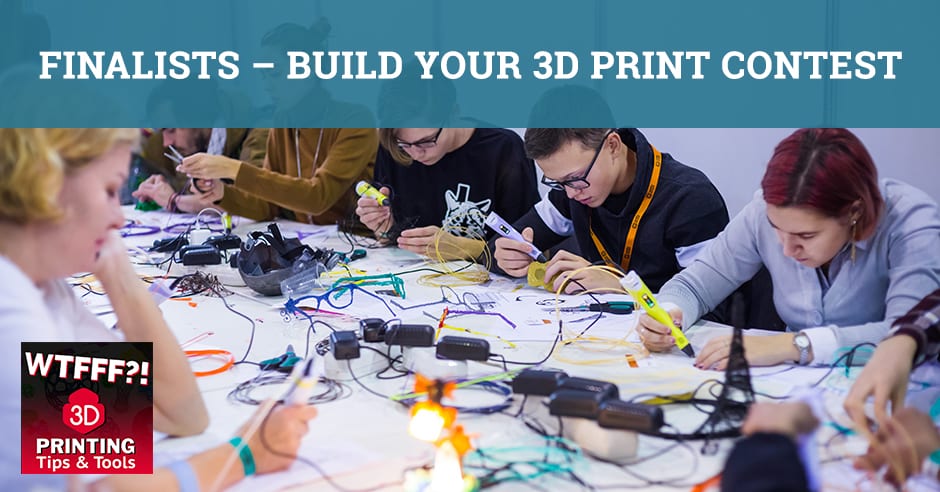 This is an exciting episode for those who entered in the Build Your 3D Print Contest! After sifting through the mentorship contest entries, Tom and Tracy Hazzard have chosen three finalists to go to the next level. Get ready to find out the amazing finalists that made the cut and prepare for the Skype pitch and a Q/A session!

We got to make our contest announcements for our finalists. It was the Build Your 3D Print Business Mentorship contest. The finalists are going to have a Skype session with us and we’re going to know a lot more details and hopefully get excited about one of these businesses.

We will choose one to be our ultimate winner. We’re excited about these, although I have to say we’re disappointed because we didn’t have a single woman-owned business enter the competition.

I sent out emails specifically to a couple of the LinkedIn groups and a couple of the meetup groups that I found online to mention that they needed to apply and not one.

Maybe none of them who heard about it had a business idea or were ready to do it yet.

Hopefully, they didn’t need mentorship and they’re okay and on their own because I think we need to make representation.

We did get some great entrants from three different countries.

We got Brazil, the US and Africa. Let’s announce the names. We have Eduardo Martini from Brazil.

He was the person who called in or gave us a voicemail on our Ask Us Segment of episode number 43.

He was asking about Rhino and some Rhino tips in 3D. That’s why I voted for him because when you’ve interacted with someone, you’ve got their attention. I liked his business idea too, but it showed a lot of thinking and reading our blogs. Also, a lot of dialed in on what we were looking for. It showed it in his pitch to us too. That’s a key thing because when you’re building a business, if you can’t key into what people are looking for, then you’re shooting blind. You don’t know if you’re aiming for the right target.

He reached out and communicated with us. Maybe he was more in our mind because of that. We do like his business plan and we’ll be getting into that.

Essentially, it’s like an online gift shop using 3D printing, laser cutting, and some other things. I liked the idea of it because he’s talking about doing a lot of personalization. I think that personalization is what makes 3D printing special.

It’s a reason why you would 3D print something instead of using another manufacturing process. We have Michael Williams from the state of Maryland by the area code of his phone number.

He’s called his company Melange. I like that name. It’s a good name. The interesting part and the reason I like this one was he wanted a physical storefront. With 3D printing, it takes a lot of showing. Our experience talking with the UPS store is that showing is a key thing. I’ve had a store before, so I think this is also right in our wheelhouse to be mentoring. Having a store has a lot of overhead and it can be a lot of difficulties, but at the same time with 3D printing, you don’t have a lot of inventory. I think it has a lot of potential to be good.

You don’t have a lot of inventory and you have a great potential to have people drop in off the street, curious, finding out what you’re all about.

You can run events and all sorts of stuff like that.

Build Your 3D Print: When you’re building a business, If you can’t key in to what people are looking for, then you’re just shooting blind.

In your community, what’s great about that is the news of your business can spread like wildfire more easily. Our finalist from Africa is Kelechi Ojinnaka.

We communicated with him as well. He reached out to us on Facebook. That was also another thing that was present in my mind, but I liked his confidence. His pitch was confident.

He’s got lofty goals, but think big and be big. I like his boldness.

He said he wanted to build Africa’s best 3D print service bureau and marketplace. I love that it was broad. Africa is big.

Although Africa is big, I think with the different languages going on in Africa from other places in the world, anybody can send somebody to Shapeways or i.materialise to get printed. If you’re new to 3D printing in Africa or wanting to have something 3D printed, having maybe a more regional business is something you would want as a customer. I think there may well be a good market for him.

He’s calling us business Afera3D. I like the name of it. It has a nice ring to it. It says where you are in an abstract way. People may not know that I lived in Africa as a child. It’s such a beautiful country. I thought choosing this one I had a personal affinity for.

Honestly, we were happy to have entrants from anywhere in the world. It’s that these three stood out to us with the most potential and the best ideas going.

I’m looking forward to talking with them because these are three diverse businesses. They’re three different locales in a sense. One is online and two are in local areas. There’s a lot of potential for all of them.

They’re each going to have some different challenges and things to consider. That’ll be interesting to get into through the mentorship. We’ll definitely look forward to Skyping with each of them individually, learning more, and then choosing an actual final winner.

Thank you all for everyone who entered. We appreciated hearing about your business and showing that you’re reading our blog, which is great. Because you weren’t chosen doesn’t mean that you don’t have a good idea.

It doesn’t mean you can’t continue to ask us questions. Go to our website and on every page, you have a button to click to send us a voicemail or you can send us an email. You can do it through Facebook. We’re happy to answer questions for any readers as we go.

Keep following along with the show because as we help the winner, I’m sure it’s going to come up with various topics that are suited to business problems that you’re going to have based on 3D printing. As we help them work through those, we’ll do a general episode about those topics and they may help you develop your idea further so that you’re ready to go pitching that idea.

Congratulations Eduardo, Michael, and Kelechi. We’ll talk to you soon.