Engaging kids in 3D printing can be educational and will open their eyes to modern creativity. In this Wild Card Wednesday episode, Tom and Tracy Hazzard talk about a project that is allowing kids to interact with 3D printing. A guy that goes by Zheng 3 did a Kickstarter project in 2014 called the Kickstarter Faire Play. The project is around creating what they call Barbie Armor, inspired by the medieval dress role play in England called the Renaissance fair. Be amazed by the intricacy of their designs as Tom and Tracy share their opinions and describe these impressive toys.

It is Wild Card Wednesday and we are going to talk about a project that is engaging kids 3D printing, although is a little bit old and there are many people in the industry that may not know about it. It is a guy that goes by Zheng 3, and they did a Kickstarter project in 2014, around creating what they call Barbie Armor. They make clothing and armor for Barbie dolls using 3D printing. It is kind of a medieval thing. They title their Kickstarter Faire Play. It is like the medieval dress role play in England called the Renaissance fair.

This person did a really good job modelling and creating 3D printable armor, clothing, shields, and swords for Barbie dolls. Some of the stuff is pretty detailed in terms of the modelling and the design. It has intricate textures, patterns, and things on it. This person really took it to the farthest degree. There is even gladiator armor and a whole bunch of stuff in there. They even have one that is attached to a cat to pull this chariot as it is literally hooked up to a cat.  It is as if it is a horse pulling the chariot into the Coliseum in Rome. It is pretty neat and a wonderful way to be engaging kids 3D printing, or even adults! 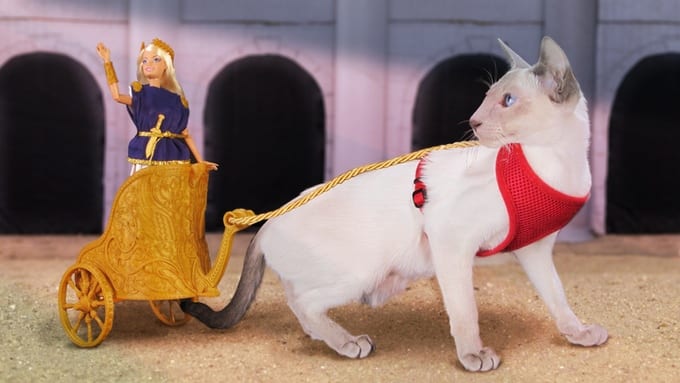 There are a few interesting things that I want to talk about with this project that is engaging kids 3D printing. It was successful. They sold $5,000 in April 2014. It is only simple 3D printed stuff. If you spent $5 backing them, then you got the digital files. If you did $10 or more, you got more digital files. If you headed to $25 more, you got even more files, and at some point you got pendants that are 3D printed in your choice of attractive metals by Shapeways. What they are creating is files for people to download. To me, this is an interesting way to monetize the creation doing this design work. The reality is that in Kickstarter, you have to design it to show it in the videos before you are going to get paid for. You are designing it on spec and hoping that you will be recovering your money. He funded 120% and he got $6,000. The majority of the backers paid more than $35 or less. It is right in the sweet spot, a very low cost. Barbie may seem to be not a typical Kickstarter fit. 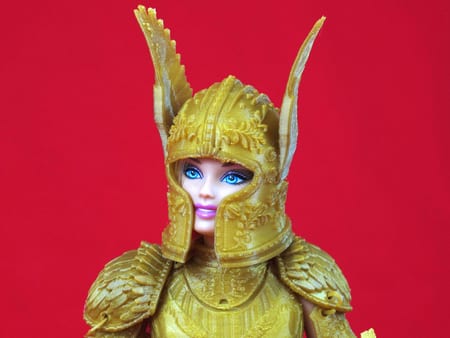 Incredible detail on the Barbie Armor | Image via zheng3.com

The guy, Zheng3, his name is Jim Roda. I guess he has an interest in creating this. It is not easy to do this necessarily, in measuring and modelling these things to fit the Barbie doll anatomy. It is 3D printed clearly in 3D FFF printers, and these are all single colored prints. The detail is really impressive. I think it is a great tandem to tomorrow’s episode where I found our speaker for tomorrow.  Kiki Prottsman who has a YouTube channel called Kiki vs IT, was doing a much deserved rant about a book on Barbie, and how Barbie was claimed to be a software engineer. But yet in the book, they are referring to her as having to check with the guy.

It is obviously not one of Barbie’s typical careers, and is noted by Jim Roda being a medieval knight as well. But being a software engineer is not one of them either. I am the only man in our house and I am supportive of our girls being able to do what they want to do, whether that is coding, to become coders, or to become a gladiator. It does not really matter. I can understand why there is such a big uproar there. This was based on a book and not actually a Barbie doll. That is how I found her, which is why today’s episode is like this.

Whatever it Takes to be Engaging Kids 3D Printing

What is interesting though is the idea that whatever it takes in education in getting tools to your kids, and engaging kids 3D printing, whatever it takes to get them excited and interested in it; so if it is a love of medieval, which cares? As long as you are learning coding, how to create digital files or 3D printing in the process that is really the benefit of it, and that is what we are really highlighting today. It does not matter what the end route is, but if you could find something that gets you all excited about it, and gets you obsessed in making it happen, then go for it.

Recently, we got a message from Tom Fassell who is in the Midwest. He is using 3D printing in education as well as building his skills. He created a crown for his daughter that is 3D printed out of PLA. He posted a photo of it in our Hazz Design Facebook page. Everybody should go and check that out. This crown is really very well done. It is not the typical crown that some people may have seen. This thing is really organic looking and it is a full on crown around her entire head with all sorts of detail. It is very cool. It is also another example of “whatever it takes” to get his daughter interested in it. She then may want to make her own and how she can adorn it with different colors or jewel types. The more iterations and variations she does, the more excited and interested she gets. It is a great way to interact to them and engaging kids 3D printing. So even if at the beginning, you are creating the model with them, and then all of a sudden, they are taking over the adjustments to it. Before you know it, they figured out how to do things that you don’t even know you could do. That is really the best part.

The thing that we want to highlight today is that – Whatever excites you, whatever interests you in creating details and creating new techniques and tools, by doing something that gets you into 3D printing is the way to go. What I know about our daughters, especially our 7 year old, is that she gets into the details of measuring, using things to measure so that she could create something of the right size, whether that is a measuring tape or something like that. She is fascinated with calipers. She is learning how to do that, and learning a lot of math. She is very good at math, geometry, and fractions. She can have fun doing that, and she is building her math skills which are one of the best things. 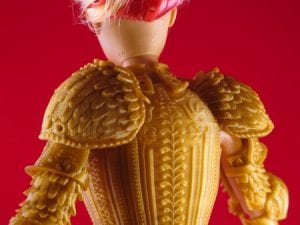 It’s time Barbie gets some new clothes for jobs she hasn’t been offered before! | Image via zheng3.com

We just wanted to highlight this as an idea of various ways in which you will learn all of those level of techniques. I also want to mention on this is the upcoming Mattel Thingmaker which we did cover in a previous podcast.  This is supposed to come out in the third or fourth quarter of this year. They are going to have a lot of the Mattel characters that you can download files and 3D print on that machine. It didn’t say that we weren’t going to do Barbie immediately and it is okay. But do you really need to print another Barbie? You could buy a Barbie pretty cheaply at the store and get it a lot faster. Now look at what these people did and they made new clothing and armor for the Barbie. Let’s give Barbie all sorts of career she has never done before. There is so much you can do.

We have seen a lot of Kickstarter videos throughout the years, but Jim Roda did a really good job with this. It was kind of a déjàvu moment for me when I was watching this video, because when you watch this video, he doesn’t talk in the video. You don’t see his face on the video. It is all content in terms of using Lego figurines and other kinds of characters of Barbie in there to tell a story in a stop motion type of animation video, to get the message across about what is neat about this project. You don’t often see Kickstarter do that. Usually, you see people standing on it and telling you the story on why they want to do this. He was only asking for $5,000. He was having fun with it.

The video is indeed very different. This is the thing that I think has gotten so out of hand with Kickstarter, and we think that we are investing in people. In a way you are investing in people in a story, the reality is that for most of the people, whatever you are going to get at the end of the day, which is what you are expecting. You are expecting a coolest cooler if you are investing on a coolest cooler. When you are investing that amount of money which is very high, you want to make sure that the guy is legitimate, so you need to see them. The reality is that at the end of the day, if we don’t start letting these products and projects speak for themselves, and we think that it is all about personality, then the reality is that we are going to find ourselves continuously disappointed.

What I like about this is that he is able to get back a decent amount of money. Probably more money than anybody else has gotten for making 3D models of certain things. In a history of desktop 3D printing, he probably got more money out of it unless somebody paid to generate content by a big company just to have a standard printer. Maybe that is different. One of them madde $8,000 in 18 months, but this was on many different designs. Here is a single set of designs, and got him $6,000. It may not be a bad model of how to go. Demographics have changed and most things that I see now are $15,000 to $20,000 are needing to be paid into a promotional program.

If you’ve already got the design and you have made a lot of effort, then most likely you are going to succeed. It was a well done video, but I think he may have done it himself looking at it. It was very clever and amusing and of course worth checking out. It is a bit of design inspiration and business topic. It is sort of in the middle of everything, which is why it is the predecessor to tomorrow’s episode to go a little deeper into engaging kids 3D printing.