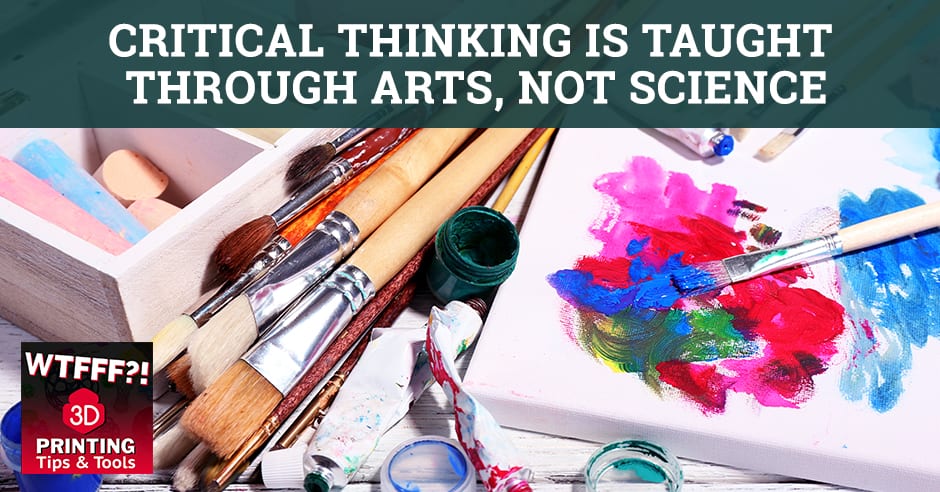 Would you agree that critical thinking comes more from the arts than it does from science? That’s what Tom and Tracy Hazzard tackle in this episode. They discuss how the STEM program needs to include the “A” for arts, making it STEAM. This is a way to develop critical thinking in students, aside from just facts and hard sciences. They also talk about the need for putting in 3D printers in schools as a step in combining technology with creativity. This will bring out new ways for students to learn basic educational components.

Critical Thinking Is Taught Through Arts, Not Science

This is Wildcard Wednesday.

We got a good one that started partially from a question from a follower but also delves into another subject that we’ve wanted to talk about for a while.

It’s obvious from it being WTFFF?! that we are comfortable throwing out acronyms here. We throw out a lot of acronyms which means letters that represent something. We forget sometimes that we have either newbies in the audience or international audience and that they don’t always understand the terms that we’re using. One of them came to us from outside of the country and said, “What the heck is STEM and STEAM?” It’s a good, valid question.

That’s a fair question and shame on us for not defining it sooner. I know a lot of people in the US, it’s obvious to you, especially those of you in the education field. We know we have a lot of teachers and student followers out there. For the benefit and we’re going to address it quickly, and then there’s another bigger picture subject related to this that we’re going to talk about. Let’s address that quickly for our international friends who follow the podcast.

STEM is Science, Technology, Engineering, and Math. STEAM is Science, Technology, Engineering, Arts and Math. We add the arts there. We, if you’ve followed the show, know that we are big proponents of adding the A and making it STEAM so that we’re adding the arts. Our reason for it isn’t because we have the perspective of coming from art school, but it also comes from growing up, my dad was a liberal arts major and went into the engineering world. He worked for a big engineering corporation and was upset that I didn’t want to become an engineer. I wanted to become an artist instead. However, what it was though was about the fact that he was a liberal arts major and believed in literature and it was always in our house and that critical thinking comes more through the arts than it does through the sciences and technology and math and that I know is a little bit controversial.

Technology and science and math would not progress if someone didn’t critically think about ways to violate the rules. There are rules in math, there are rules in science and your job is to prove those rules. You start with a hypothesis and you prove it out in science. You start with proof in math and you dive down and go through the formula of what that is. That’s the essence and the basis of those things. There’s nothing wrong with them. There’s absolutely nothing wrong with that. At some point, you have to critically think to violate that. To do something innovative, to do something disruptive, to do something that is outside of the normal connection of that straight mathematical process, that straight science proof process.

When you do that, learning that critical thinking process comes from the arts, it comes from the humanities, comes from literature, comes from people being critical, criticizing and getting your mind to thinking that way, getting your mind not to accept the rules. I am a big proponent of continuing to make sure that all of our science, technology, engineering, and math have a component that forces that critical thinking through it. That forces the creativity into it. Otherwise, you’re just teaching someone how to use a 3D printer. You’re not teaching someone how to create using it.

How to do something else with a 3D printer to make it their own, do their own thing.

Don’t get me wrong, there’s a process. At some point, you have to learn how the machines run. You have to learn these technical things. There’s always a part for that, but that’s not the goal of education, that’s a means to an end. That’s why I want to keep arts in there because it forces that into the process. It makes that happen when our schools are set up in a way to try to eliminate deviation. It’s a conformity kind of thing. Whenever possible, we build in the opportunity for essays in our English classes, it’s not just a question and answers thing. It’s not cut and dried. That’s what we want everybody to come out of school, being able to critically think because that’s how we’re going to move things along.

We see in our communities, in our schools, the old term, the first term, people used to describe a lot of these classes and curriculums and pursuits that people go after involving 3D printing were more STEM. That was the first real term, science, technology, engineering and math that they used and they left out the arts. We see over time that they’re including the A. More of them are calling it STEAM than STEM. It’s sad to me, especially in the United States and hopefully not in a lot of the other countries some of you may be in, but that the arts got left behind with school budgets and things. We had art in our schools growing up. Our kids have a traveling art teacher maybe they see once a month in our public schools.

I had that here in the Irvine Unified School District in California. We had it in the ‘80s. We had a teacher who came every six weeks. That’s how horrible it was.

We had it in our schools throughout our schooling in the Northeast where I went to school. It has been cut back so much. One of the great things that 3D printing is helping to do is to bring the arts back into the schools.

You have to be creative. It forces creativity. It’s forcing it into the curriculum again and in classes where it might not have been as logical but what it is doing, and you and I believe this strongly because we believe that our design process, the process of design is a process of thinking. We can innovatively think our way to solutions for any problem that arises because we feel comfortable doing it every day in our artistic endeavors. It’s a comfort level with that critical thinking. It’s a comfort level with a solution, problem-solving. We don’t feel uncomfortable when the answer isn’t cut and dry, yes, no, A, B, C, D. We’re comfortable in that world.

I always have appreciated that my college education taught me how to think more than anything else. There were actual techniques. I had to learn many different things, but what our art school taught us is how to think. Whenever we approach a project, it’s always a thought process first and then, “How are we going to execute that?” You have rules and limitations.

Critical Thinking Through Arts: Critical thinking comes more through the arts than it does through the sciences and technology and math.

Use tools and other things. Coming up, we’re going to have an interview with STEAM Maker Workshop, which is out in San Diego. It was one that our teacher of the year, Cindi Schulze, referred us to as to who hired her. They put the A in their STEAM Maker Workshop for a reason because they believe that they want to encourage innovation and not invention. They believe strongly that innovation comes from that art and critical thinking, which I love the idea of that.

That’ll be a great episode. For our followers, that’s coming up. Stay tuned for that one. That’ll be a good one.

She’s articulate and done an amazing call which you weren’t on, unfortunately. You were away and I took it without you. We’ve been doing an on and off occasional solo thing. It’s not as much fun.

We’ve had to because of our schedule. I don’t get to rib you as much.

I’m not enjoying those as much, but it’s a reality of a growing business.

Sometimes we need to do it. Honestly, I’m tired of you yawning when I’m doing some tech Tuesday subjects that are highly technical. You’re like, “How long do I have to listen to this?”

I liked the previous one.

It was a little different. It was still technical, but it was not quite as nitty-gritty, in the trenches of your 3D printer technical, which will be again.

We hope that helps explain exactly why we use the term STEM and STEAM and why we feel strongly that the arts belong in our science, technology, engineering and math. If you have any questions like that, those basic questions are why we’re here. If we’re not defining something, send us a message.

WTFFF, that is an acronym.

It is all an acronym. It happens when you get within an industry that you start throwing around terms. I’ve mentioned and will occasionally say, “3DP.” We write that all the time, but that is 3D printing. It happens all the time in the industry and we get a little focused and forget that we have a new audience sometimes and new people who are interested in it. We make it more difficult for them by the mere fact that we forget to define at least some point in the process. We’re going to try to be better about that.

Never be afraid to reach out to us and ask us even a simple question like that, that’s an easy one for us to answer and we do answer them, serve them up.

You can do that anywhere on social media, @HazzDesign. You can go to 3DStartPoint.com. I’m going to reserve Tom’s voice for the next episode that we must record.