Today’s topic comes from someone we talked to recently who asked us a question: Is it possible to make a 3D print where you print part of it and put some other object of a different material into the middle of your print and keep printing over it? So you encapsulate it or capture other parts in your 3D print. That’s a really good question.

It brings up a lot of points of whether or not that part could be damaged or how it fits in there or if you’re going to hurt your 3D printer if you do it. Will it get knocked? There are a lot of things to consider.

Can You Capture Other Parts in Your 3D Prints?

We had a recent MatterHackers Ask Us Anything event, which was great. It was a live Ask Us Anything. We had a lot of fun. One of the great points Lars brought out, which I thought was amazingly helpful, was a tip that you can print a 3D model of the object that you want to put in your 3D print so that  you don’t damage the actual final product. This way you don’t damage the object that might be important, if it’s a printed circuit board or it’s a piece of special metal or whatever it might be.

The person who asked this question was new to 3D printing. For those of you who also might be new, it’s important not only to make sure that you’re not damaging the piece you’re inserting into the middle of your 3D print, but it’s also important that you don’t do something that could potentially damage your 3D printer as it continues to try to print. 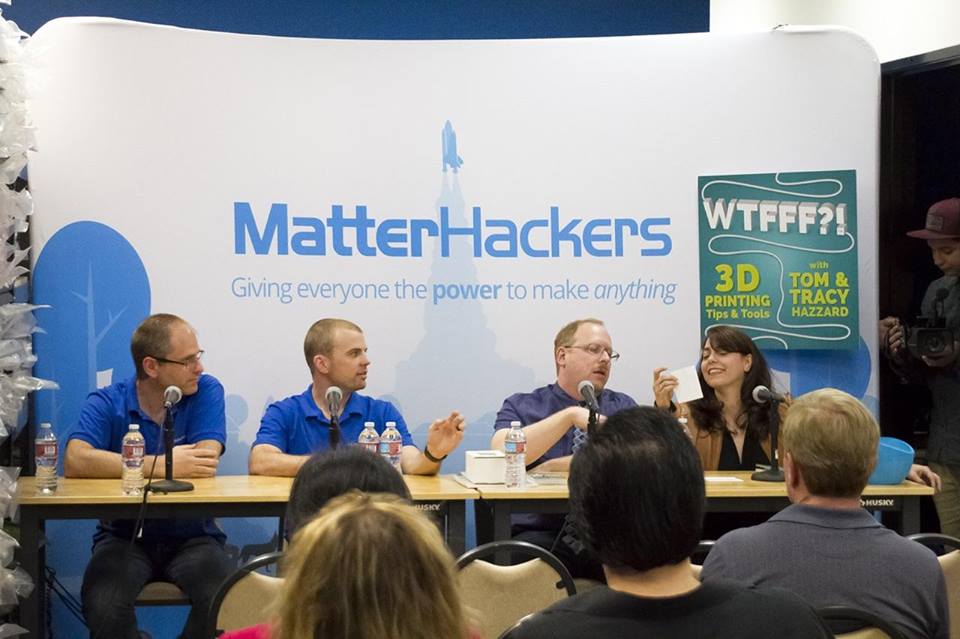 Ask Us Anything panel with MatterHackers

For newbies in 3D printing, you really need to make sure you watch your 3D printer print quite a bit and understand all the motions that are going on and how it works. This doesn’t have to be a terribly long process, but realize how that nozzle is moving around. Think logically about it. You can certainly capture some other material or object in your 3D print, but you have to let that print grow to a height that is going to be above whatever you’re putting into it. That nozzle has to be clearly moving above it so it doesn’t interfere and hit it.

If it hits something hard, only one of two things is going to happen. It’s either going to break the material or part that you have put in there. In the case of a printed circuit board, that’s pretty fragile. You don’t want to knock a chip or diode off of there. If you were inserting a piece of metal, say you’re making a hinge or a piece of jewelry, you might very well break the tip of your brass nozzle of your 3D printer. I’ve seen some nozzles that have a very small opening and a fine amount of metal on there. They’re not just a cone; they’re like a point. Brass is not the strongest metal in the world. If it encounters steel, the steel will win.

Take note of how your extruder moves around the print bed

It opens up a lot of possibilities being able to combine things like that. I definitely think it’s worth mastering this skill if that’s what you need to do. I also think it’s a really great idea for making self-contained prototypes. A lot of times, we get clients or associates who have clients who need to make objects that are like this. They’ll just bondo it afterward and paint it; that’s their idea. They will make it in two pieces.

But that defeats the purpose of 3D printing. I’ve had enough bondo in my life; I’m done with bondo. The minute 3D printing came around, I was so excited because I would never have to make another prototype and use bondo to fill something in. But I totally understand their point; it’s less work to make it in two pieces and use bondo to hide the seam because my client won’t understand there is a seam there normally. They’ll think it’s flawed. Paint can hide it. But I’m into making 3D printed parts that are what they should be coming off the printer.

Let’s talk about a few more technical issues around this because they are important. One of the tricky things about doing this—and I won’t go too much into the design of how you might support the object that’s in there because that is very specific to whatever part you’re putting in there—but in terms of operating the machine, here is the tough part: When you are going to put an object into your 3D print and then continue to print around and over it, you have to pause the printer at some point to do it. The tough part is knowing when that printer is at the right height. If you don’t have a printer that runs on an external software, it’s difficult. There are some slicers that you can program in a pause. Actually, I don’t think there is; I have not experienced one yet. If I’m wrong, and any of you listeners know, please let us know.

There are definitely slicing softwares that you can program it in to perform different functions, starting at different layer heights and going up. But I know of no slicing software or printer that allows to program it in to print at a certain height and then pause. I want it. I think we should talk to our friends over at MatterHackers about if that’s happening and learning to program that into their slicing software. That would be a very valuable tool for this exact purpose. It didn’t come up at the event with them.

Here’s the thing. It’s up to you. You have to manually pause that print. Some printers, when you pause, are really smart, and the extruder will move away from the part so the hot extruder doesn’t sit over the part. Others are not. They will just stop wherever it is. That is unfortunate because you could create a divot in your part that is melting. That’s an issue you will have to address.

Or you can print another small object off to the side that it prints along, at least up to the height that you’re printing. When you move over there, you pause it so you’re not doing it over your good part. That’s another idea. It’s sort of like a white tower, but you wouldn’t need it to keep going up higher after the point which you pause. So you can make it just the height it needs to be. That’s one tip about not leaving the nozzle over your part to melt.

Another related tip is as you’re creating your 3D printed object, you want to engineer or design into it a clue that you’re at the right height. No matter how good your judgment is about if it’s six millimeters high or 15 millimeters high, it’s near impossible to tell if you’re at the right layer when you’re printing layer thicknesses of a fifth of a millimeter unless you have a color change with a two-color printer. Or you can engineer in a piece of geometry, whether it’s a little groove or a text that starts to print somewhere, and when you see your nozzle starting to make the motion of that letter, you know that you’ve reached the height and should pause it to put in your part.

We used to do that with changing colors. It wasn’t totally critical if it didn’t do it because it would get buried under other colors. If you looked at it closely from the side, you might see one little layer of the wrong color, but no one ever noticed. Your eye will not notice a 200-micron, a fifth of a millimeter layer of your text is in the same color as the base of the part and then you change it. That’s pretty easy to deal with.

The critical things in doing this are really understanding the proper amount of space you need in whatever cavity you’re creating to add your other material part. We give the example of a printed circuit board or a piece of metal like a hinge or jewelry. And designing in a place that is going to give you a clue as to the right height so you can pause it. Some day, we won’t need to do this, and we will be able to program it in, but I don’t think we’re there yet.

You also have to think carefully about bridging over this object at some point. That presents some challenges, too. If you will put a printed circuit board in there that has parts that hopefully the heat of melted plastic over them won’t hurt, you have to think about how to design and build that structure to capture that object so it doesn’t move around or it does move how you want it to. How are you going to cover over it? If it’s a large flat area, there is only so much distance that a 3D printer is going to bridge over that. You have to think over your design carefully. The fact that you might need support is a problem in that area. There wouldn’t be any support in that case.

There are ways to deal with that certainly. That was a first-class tip that Lars Brubaker gave. When you try this the first time, don’t put your good-quality part in there. Put a dummy part in there. Styrofoam is another good suggestion there. Your nozzle tip being hot, if it hits it, it will just melt it or break it away. The nozzle and the part that is printed below it will win. The Styrofoam will lose. So you want to test it out.

I think this is a great subject to be thinking about. As people get into 3D printing and want to do more with it, it’s a natural thought to add other parts into it. It could be as simple as putting a threaded insert that is made of metal or a nut that you’re using or a piece of glass for a window. I was thinking about eyewear. Wouldn’t that be great to put it in then rather than snap it in later? That is such a problem because they are always falling out. You can’t really 3D print glass and have it have the clarity you need for a pair of glasses, but you could drop a piece in. I love that idea. There are definitely possibilities.