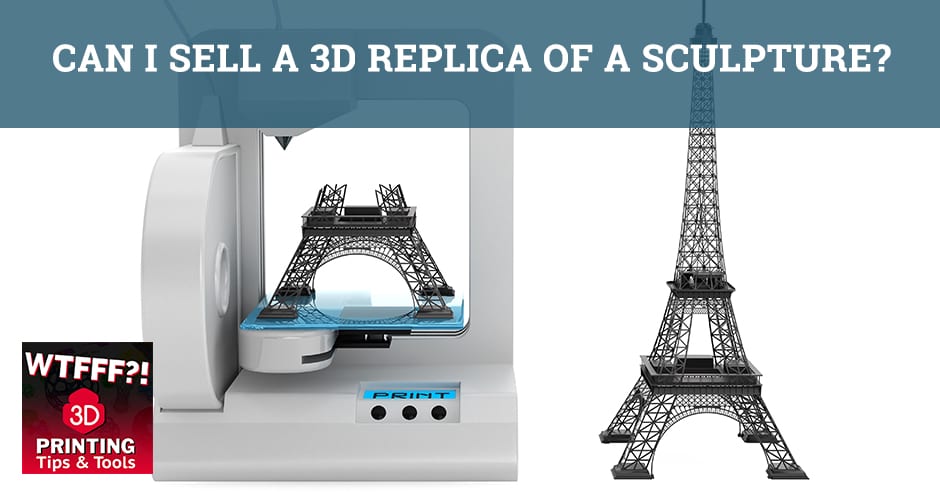 3D print is just like any other form of art where there is glory in every piece produced. Copyright Infringement is a hot topic in the 3D Print industry. However, when you are marketing a replica of your own sculpture or of a public sculpture with permission, Tom and Tracy Hazzard have found that there is a lot of market interest. Join them as they dive deeper into the 3D replica issue and share examples that relate to copying or replicating with permission.

Can I Sell A 3D Replica Of A Sculpture?

This is about art and 3D printing. I love that subject.

As we went to art school and art design ourselves.

I’m super excited about the interview we have with Bridgette Mongeon. She’s a sculptor and she’s done some fabulous things. That’s been on our minds so we tried to call through the Ask Us questions to get to ones that are art, sculpture and 3D printing related. The question is, “Can I sell a 3D print replica of a sculpture?”

That depends if it’s yours or if it’s somebody else.

Is it your sculpture, a public sculpture or done by a famous artist? Is it somebody else’s sculpture? That copyright definition has to be defined first.

Let’s address them separately. If it’s your sculpture, you can do that. That may be obvious.

Can I sell it? Is there a market for it? That would be the question there. From our discussion with Bridgette, there absolutely is. This is a great growing market for a lot of sculptors and artists out there. We’ve seen a couple of great ones like Joshua Harker who we saw at the trade show in Burbank. He has fabulous sculptures. Think about it this way. You have an event like a gallery opening and your sculptures are in it. It’s a great opening night giveaway and a small-scale reminder of what you’ve done. If you’ve done a sculpture bust of a loved one or someone who’s passed away, that’s a great memorial item as well.

We’ve heard of people using these small replicas of sculptures as awards, giveaways and to people that sponsors an event or something like that. It’s great and inexpensive.

Like a museum, you give it to your high-ticket donations. There’s a big market for that and 3D print makes that possible. You could never possibly do that by hand and all those smaller sculptures. Some sculptures don’t scale down.

If you want to make a replica of a sculpture you didn’t create, that’s an entirely different situation because sculptures are protected by copyright law.

Most people don’t think of a three-dimensional item of any kind being copyrightable but it is the case that sculpture is included in copyright law. There was this guy who’d made a replica of a public sculpture. It was a Michelangelo, which has been in the public domain for quite some time. I’m sure the copyright has expired on that.

There was a copyright on the sculpture but then the city who owned it and where it was displayed, he went through this and they allowed him to do it. It also depends how you’re going to make a replica of it. If you’re going to craft this replica, you’re going to create a 3D CAD model from scratch using ZBrush or something. You are using a sculpture you see to make as close a copy as you can but you’re sculpting it in the computer so to speak. That’s fair game.

That’s allowed because replicas and that kind of sculpture process is aged-old artistic licensing. That’s how you learn a good sculpt.

When we were in art school, we did sculptures as much but with old master paintings and things. We would make copies of them, not meaning using a Xerox machine or taking a photograph of it. We’re talking about drawing it or painting it.

You have to draw the line at scanning and you should draw the line at photo telemetry as well because in some cases, the software does all the work and you do nothing. If you sat there and pieced all that hand photographs together yourself and then created a digital file from that, that might be okay but most of them use an algorithm and that doesn’t count.

If you take 100 photographs of every different angle of a sculpture that’s in a public place and you’re using those photographs as a reference as you’re modeling something in the computer, you’re crafting that 3D model using your brain and your skills with the CAD program, that’s also okay.

If you took those digital files of those photos and used an algorithm to create the three dimensions, that’s like xeroxing. It’s just three-dimensional xeroxing.

If you went and 3D scan something in a park, a sculpture or something, that’s questionable. There are a lot of things being written about this subject as 3D printing is becoming more popular and a bigger concern. This is not going to be the last to be set on this or the final chapter in any way. Laws are probably going to change as time goes on with 3D printing or certainly court challenges are going to more define what the application would look like.

Left Shark is a good example. If you don’t know what we’re talking about, we’re talking about the Katy Perry’s Left Shark costume. It’s a borderline one because that is not a sculpture by artistic definitions of any kind, but it does. There was an artist who created that costume. I don’t think Katy Perry owns it necessarily. It might be assigned to her but somebody did artistically create that. It doesn’t do anything different than creating a sculpture of Mickey Mouse. They probably would go after you if you sold that. There is a case there. It was a stretch. There’s a difference between fan art and that’s what that was.

Not only that, somebody looked at that costume on TV. They went in their CAD program, made a model of something that looked close to it, represented it and called it Left Shark, which probably is why Katy Perry had a fit over it.

I don’t think that her costume was called Left Shark before.

Still, they claimed rights to that. They ended up dropping it because the reality is he had no claim to that because he looked at it and then made a model that was downloadable and available. Originally, Shapeways took it down but they put it back again.

In that case, it makes a lot of sense for you to go to the copyright holder or whoever that might be and push them and say, “If you’re not thinking about 3D printing an item, I created this. Can we work together on that?” I think that’s a good way to go. Some artists did create Left Shark in terms of its eye, shape and mouth. That artist worked hard on that and that’s the character she or he created. They deserve credit for it just like you want with your art.

This is a big debate. That’s the point of it. If you feel like it’s border lining on copying someone else’s work, then you shouldn’t be doing it.

You should certainly be cautious and seek some advice either from your attorney or some other people you trust. If you don’t have an attorney, it’s definitely a murky area.

Ask for permission. That’s the case of the sculptures in a public place. If that’s what you want to do and you’re going to do it the artistic way, still ask for permission. I bet you, there’s probably a case in which this chamber of commerce store might want to carry it because that’s such a cool idea. You might get a sale out of it. There is a marketable solution out there for your sculptures and there’s a place for you to sell it.

The other last tidbit here to add is if you’re going to take a sculpture and alter it in some way to make your own statement, then that’s different and completely fair game. If you’re not going to alter it and you’re going to essentially make the equivalent of xerox copy of something, it’s probably not a good idea.

Maybe Left Shark should have been spinning on his head or doing something like that. That would have been a great interpretation of it because he certainly didn’t do that. He’s with an injured fin because he was such a bad dancer.

One of the two sharks was quite a good dancer and the other one was clearly not. It was fun to watch.

We are having a lot of fun with Ask Us Anything segment and we hope that you’re going to ask us more questions.

We’re getting some more from international destinations.

We’re excited about where the questions are coming from and what they’re about. Please go to our website HazzDesign.com. I keep making it easier all the time. There’s a tab on the bottom.

There’s a button at the top that says, “Send voicemail.”

It’s getting easier and you can always go on Facebook and send a voicemail. You can always send us a message anywhere and tweet us. We’re always @HazzDesign everywhere.

We’re going to try to get to all of them. If we haven’t gotten to yours yet, just hang in there. You’ll read it eventually, especially if you haven’t left us a way to contact you back to let you know when it’s coming. We have a queue of these and we’ll get there.