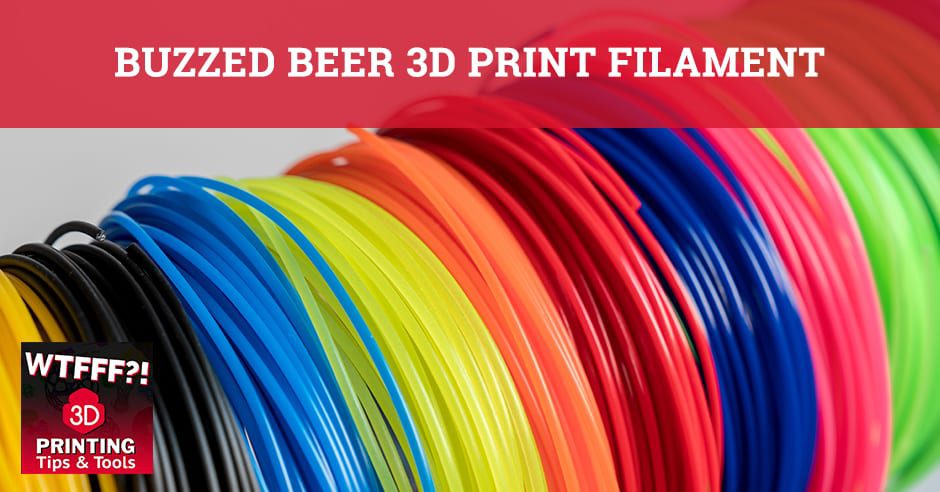 Often, we think of competition as a disadvantage for us. But what if instead of thinking about it as a roadblock to success, you consider it as the path that could actually take you there? Tom Hazzard and Tracy Hazzard redefine competition as something good, telling us how that very competition indicates that there is a market. In particular, they talk about collaborative capitalism, collaborating with those who are doing great. They give a shout out to Fargo 3D Printing and their cool Buzzed beer 3D print filament, vouching for it as anyone who sees a good product should.

We have a new topic. What are we going to talk about, Tracy?

For that, I thought we’d give a shout-out to our fellow podcasters, Fargo 3D Printing, and also because they have launched a cool product, beer filament, coffee filament, and hemp filament. A little bit of that is maybe not the perfect fit for Earth Week, but I’m making a stretch here because that sounds too cool.

It is filament that is made from the byproducts of the beer process. I know at least that much because I saw some information. I don’t know about the hemp or the coffee, but they have a large component of these products. It’s made from beer. It’s made from hemp. It’s made from coffee. I wonder if the guys who use the hemp stuff hang around the printer too much.

It’s cool that they have worked on an eco-spool. They’re working on bio-based materials, not oil. There are a lot of things that they’re doing there. The video for the beer filament is awesome. You guys should go to it. I love their names. They have a fun time. Their podcast is fun. There’s no question about it. It’s a little more techie and a little bit different than our speed, which is why we felt there was room for us in the market. We never intended to compete against them.

Let’s all participate and have our little area of the market and we’ll help the market grow together. Everybody wins in that. It is the way that we believe that’s the best way to work. It makes for a better Earth when we don’t think about each other in that competitive, nasty way. Whenever there’s a good product, I don’t care who makes it. I’m going to give a shout-out to it. We haven’t tried it yet, but I want to.

This is not a review. We can’t vouch for this.

It’s not available yet.

We want to get some of it, but some of it was out of stock. We couldn’t get it. You’re right, Tracy. The reality is when we looked at the podcast market, the landscape of other 3D printing podcasts out there, there were a few. That was a good sign because that said, “People want to hear about this.” Podcast is a great way to reach them. We went out there with the idea to do something a little different that we thought people would enjoy and be wanting to come back and listen to day after day, week after week. The way our audience is growing, that’s true. Nothing against those guys. They’re definitely more on the high tech or technical end of things. We’re a little bit more on the business and design side of things. I try to get into some tech subjects, but there’s room for everybody for sure. This stuff is cool. I want to try it as soon as I can.

I would love to find out if it smells like coffee or beer.

If we could have our office smell like coffee while we’re printing, I’m in. That’s cool.

We could and we have designed a coffee sleeve. There’s going to be some news coming up about that soon because this is going to be the first 3D print design of ours, which is going to be available out there for any of you to get. I’m not going to reveal too much yet. That’s coming up here. We’re going to start letting you know about that.

The colors of that would go great on your coffee cup. That dark coffee color or that beer color, it’s Java looking.

3D Print Filament: Collaborative capitalism means that you collaborate with those that are doing great things, and everybody wins.

We should get some of that. That one looks like it’s available. The beer, not so much and the hemp one, not yet either as it looks like out of stock. There are some cool things that they’re doing here. They have Glass-Filled PLA. They have a couple of these ones where they change from one color to another. They go from blue filament to green filament. They give you the ombre mix, the mud. It does look cool. We’ve seen that transition happen. If it’s the right color, it looks good. If they’re transitioning from blue to some other weird color, it looks like dirt.

You could use that for things you don’t care what color they are. When you’re printing, do they charge less for that material?

They do charge less for it. That’s a good deal. At the same time, they don’t tell you what color you’re going to get.

I’m having a déjà vu back to when we lived in Michigan when I was first designing products out there. I worked with some guys who did some engineering work on Fruit Loops extruders. Which cereal company was in Battle Creek? Do you remember?

They engineered and produced these machines.

I don’t know. This is off the top of our heads. There was a major cereal manufacturer that was in Battle Creek, Michigan. It may be Kellogg’s. You may be right. They make Fruit Loops and they make red ones, orange ones, yellow ones, and purple ones. There was always a transition when they would change colors and the dyes would change. There was a bunch of Fruit Loops that came out looking like mud. I’d never forget this. When the guys told me what happens to those Fruit Loops that are that mud color, the poor Canadians, they would put them and save them and package them into Fruit Loops that were distributed in Canada. For Kellogg’s, the USA market gets FDC dye red number and yellow number, it gets you the pure colored Fruit Loops. The Canadians get the mud. They get the transitions. That’s what they used to do.

That’s terrible. Poor Canadian readers, I’m sorry if you grew up on that.

It makes for a better Earth when we don't think about each other in a competitive, nasty way. Click To Tweet

I wonder if somebody like John Beeler would be able to confirm if they ever had Fruit Loops, “What is it with the colors? Americans don’t understand colors.”

They wonder why it didn’t sell in Canada. Why do moms in Canada not want to feed their kids Fruit Loops? It looks like dirt. That’s why I thought we should bring up the cooperative community. I want to be clear about this because we had this happen where we were listening to a speaker and he spoke about how he did this cool thing where he managed to get himself a job coding. He didn’t know how to code yet. He “hired” some coders at another school to come and do it for him. He paid them beer and pizza.

He did say it. That’s all he paid them, beer and pizza.

That is the part that is not cooperative or collaborative. That’s where I draw the line. That takes advantage. That’s why I’m militant about it when we see that happening to designers in this industry. If you’re going to build your businesses on the content, then you need to pay the content makers. That is where I draw the line. Those that provide the most service, the most valuable part of it, need to be paid the most.

It’s the only way the whole economy around 3D printing is going to work eventually. We talked about retail and how some of this would affect it and all that. When 3D printing does go mainstream in retail with the zero-inventory model, when that catches fire, who’s going to be in demand, and who are they going to need to pay are designers to create that content that all those retails are going to need to sell and distribute. It will still be cheaper than traditional manufacturing of something and shipping it halfway across the world.

It will still be cheaper from an overall load. If you’re going to cheap out and say, “You’re going to get that for free,” it’s not going to happen. We’ve had a couple of projects come our way that we’ve turned down because of that. I don’t think that you can take advantage of that. It does a huge disservice when you say, “You should get it.” We do get these comments that I’m sure we’re going to get them again because I said this. You guys should be providing your designs for free and do a service to the industry. I say, “No.” The biggest service to the industry is to prove that there’s a value for that.

There’s an economy here that will continue to be here in 5 and 10 years.

Our mission is to create that value for that, to make sure that they understand that. In the end, it will be cost-effective. It will be economical and it will be a sustainable business for all parties involved because it’s not sustainable if you are taking advantage of a person in the process. That’s collaborative and that’s cooperative capitalism.

We tied it in, it worked. We hope you enjoyed it. It was fun for us. I hope it was fun for you. I won’t go into too much detail. Don’t forget about the Maker Milestones. We definitely will be sharing your projects. We want to see more of them and hear about it. Feel free to put our @HazzDesign in there if you’re putting it down on Twitter so we can get some attention to it. You’ve got to put that #MakerMilestones if you want to be entered in the competition. Anybody can do it. We’ll talk more about that in another episode. There’s some information on our website about it. Check it out.

3D Print Filament: If you’re going to build your businesses on the content, then you need to pay the content makers.

Our website is 3DStartPoint.com, as always. You can go there and leave comments and nasty messages about how you disagree with me, but that’s okay. That’s the way it works.

Let’s all be nice. We can agree to disagree. We’ve had some people disagree with us, but they’ve been polite and professional. That’s how we hope it continues to be.

I want open debate and I love that. Thank you, readers, for being willing to debate with us.

We can have mutual respect even if we disagree.

I absolutely do. You can do that at 3DStartPoint.com. You can also do it on social media anywhere, @HazzDesign.

We’ll be back for a much more in-depth interview regarding something Earth Day-related in 3D printing industry and filaments but in more detail and more useful and practical. There’s a lot of cool stuff next episode. We hope you’ll tune in for that or download that, as the case may be. We’ll see you then.