I love this day. Me, too. We are finding more and more fun things to highlight and show the potential of what other people are doing in terms of design. I have to say, before we push this one out today, I have been getting some really great people sending me their design inspiration in a non-pushy way, which I really appreciate. People send me a conversation to have about what inspired them. It’s not like, “Cover my idea!” It’s so nice. I want to cover them because they are inspiring me by what they are saying about what inspired them. It’s great. Thank you, guys, for sending us your design inspirations. Keep it up because we are happy to highlight you, but also because we know that if we are getting excited about it, all you guys are going to be excited by it as well.

This one is different today. It is actually a project that was done about two years ago, but it’s been in Europe. The architect is from Barcelona, but what he did was in the Netherlands. That doesn’t surprise me because the Netherlands has been a hotbed of 3D print activity. In some ways, it’s been ahead of the U.S., especially in the early days of 3D printing. 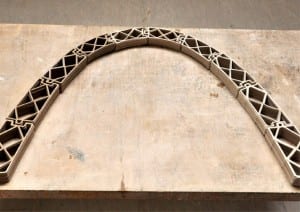 Each “brick” is unique

This is by an architect who created this thing called Building Bytes, as in computer bytes. How geeky. Brian Peters is his name. What he did was modify a 3D printer to produce ceramic bricks for actual building in architecture structures. I’m using “bricks” in quotes because it’s not like he is producing rectangular bricks. He is 3D printing structures. Think of Legos as bricks. It’s not a physical brick. It’s a building block essentially. His are very creative.

He adapted this 3D printer to print ceramic material in an FFF type of process. It has a fairly thick nozzle. The actual dimension was hard to determine. It looks to be an 8-9 mm diameter amount of a tube of ceramic that he is extruding. It’s pretty thick. To build a brick that is your typical thickness of several inches high, it looks like he has 12-16 layers to make it that tall. They print pretty quickly. 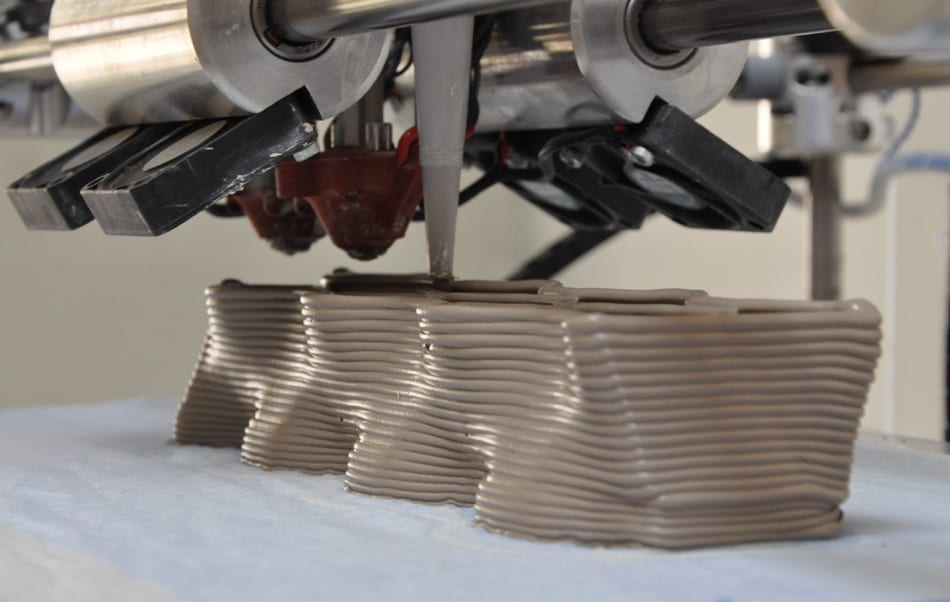 The cool thing is the shapes. They are structurally interesting. Some of them are interlocking. We are going to have some videos in the blog post. They have YouTube or Vimeo videos available. When you think about the potential and what this really opened up for the architectural field and what they are doing, it’s quite amazing. First of all, they could make customized brick structures. Let’s say you wanted to build something that was a cone shaped structure of a building. You would constantly have changing diameters of bricks as you go up the cone.

Just for a history lesson. The other reason this is interesting to me is because I come from a family of brick masons. My father and his grandfather and his father really built brick chimneys and fireplaces and brick walls and staircases for residential and commercial stuff in New England. I have actually seen it first-hand. One of my hidden skills is I know how to mix cement. Doesn’t that shock you, folks? How often have you used that in your life? Not very much, right? Surprisingly more than I thought I would. Tracy is not really a construction kind of girl. Camping for Tracy is like the Holiday Inn. That seriously is camping though.

Anyway, I do know how to do it, and I did help my dad when I was younger. They would take these bricks, but it was artistic at the same time. I was always fascinated because regular clay bricks have a different quality to them. Some are blacker, some are whiter, they have a quality of color that happens because of how they get baked. Then they would have to brick-lay them, which is the term, so you offset them. They would do something creative where sometimes they would brick-lay them and put a half brick in occasionally or a blackened half brick in. They would do something creative and cool-looking. When you were trying to create a shape where you had to go around a shape of something as you were building a brick wall, which happens in landscape all the time, you had to break the bricks and get creative with how to end it. You had to think about it as you were building it, and it was always fascinating to me that they would be able to make it work out.

I was actually impressed when we were first married and your grandfather was still with us, watching him do a project and how he would break the brick just by striking it with one of his tools. It would break just the way he wanted it. He had probably 40,000 hours at this point in his life of doing bricks because he was in his 80’s. He knew exactly what to do so it would do what he wanted. He had these massive hands, and he was incredibly strong.

Not to take anything away from traditional brick masons, and certainly that is a heck of a trade and a craft that they do. But this is really exciting what this 3D printing of bricks can do. As an architect or designer of any kind, you can plan a structure and then you don’t have to use those same square form of bricks and figure out how to cut them and fit them to the shape. You are creating every single brick in some of these projects that Brian Peters has designed. Every brick is different. They plan it out in the computer and design it, and then they print each brick a little differently.

It’s really cool that you can create this custom-sized, custom-designed, custom-patterned brick and plan it out perfectly. I love the idea of that. Some of the shapes they make are beautiful. Shapes that you really couldn’t make in a traditional brick-making process. Some of the structures, maybe there is more going on in the internal structure that once it is assembled you won’t see. But in other cases, it is absolutely part of the visual that you see. In either case, the reality is you are using less actual ceramic material, and you are creating a geometric structure with these. These bricks can interlock. 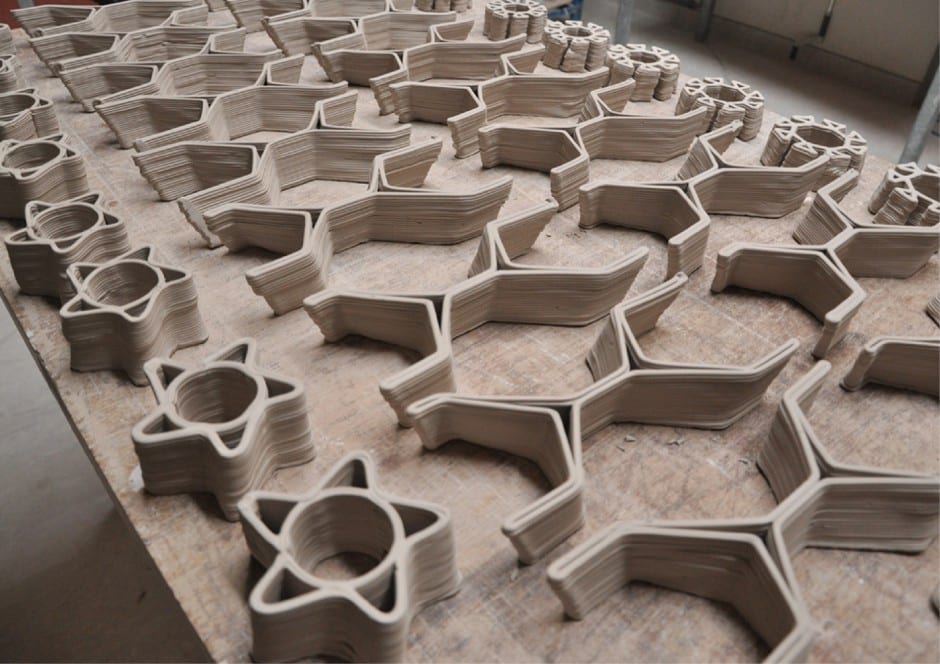 My other thing about it is this would be such a fun design inspiration project, in small cases. Treat it like a Lego brick. Make a bunch of small ones, and then make really cool forms and shapes. This is something you could easily do and then see how strong you made something. Do it again with a different shape and see how the strength characteristics are. This is a great project really to test your STEAM. This is a great project for education. You are not just 3D printing one complete object. You are thinking about breaking it down into elements. I love it. I think it’s great.

You sent an email over to my dad. You asked him what he thought. I was really surprised that this brick mason old dog… Did you just call my dad an old dog? He is an old dog. Let’s face it. I’m telling him. You will, I’m sure. He doesn’t really listen to the podcast. Oh, he does. You’d be surprised. Ah, well, we’ll find out because he will get me for this one.

The thing is he is a guy who is retired. I would say he is very set in his mind and his ways of how he thinks about things, especially things that are business-related. Of course we should mention that he wasn’t a brick mason his whole life. He started out in the family business, but then he went to college, became an engineer, and built multi-million-dollar pipelines. He went on to be a major corporate manager and engineer with a great business.

But he is very set in his ways about certain things. I frequently have arguments with him about why I want an electric car. Of course he was an oil guy. I fundamentally disagree with some of these things. You can’t come to Sunday dinner anymore.

The point is, he really looked at these videos and at the 3D printed bricks and is like, “Wow. That is pretty cool. There is something there.” He actually respected it, was intrigued by it, and then probed a few more questions because he was genuinely interested in it. I was really pleased to see that.

One of the other things I really want to mention about these bricks, which is an environmental benefit, and that is why I am excited about it, besides the design aspects: This 3D printer is designed to be portable and put on location. You can 3D print the bricks right where they are going to be assembled.

Do you still have to bake them? They didn’t cover that in what I have been reading about it. That was the point your father made. You have to bake them for them to be tremendously strong. I don’t know if there are some structural limitations to these bricks. A lot of the things they have designed have been a lot more artistic and sculptural than they are functional. I don’t know the answer to that. I would agree.

You would need to bake them in order to have that additional strength. A lot of clay bricks are baked outside. They make them, and they are laid out in a big field, and the sun bakes them. They take a lot of time to make them. Most bricks went through a kiln process. I don’t know how they are addressing that issue. But I do like the idea of the customized, unique, one-of-a-kind process in building things with unique bricks and the local building of them all. It just makes a ton of sense. Very exciting to me.

Cool project for this Friday. I love it. I am excited about it. I would love to know if you guys have done a project where you have used a building block of some kind to create something bigger. You do have a build plate limitation, so have you done that? We’d love to see that.