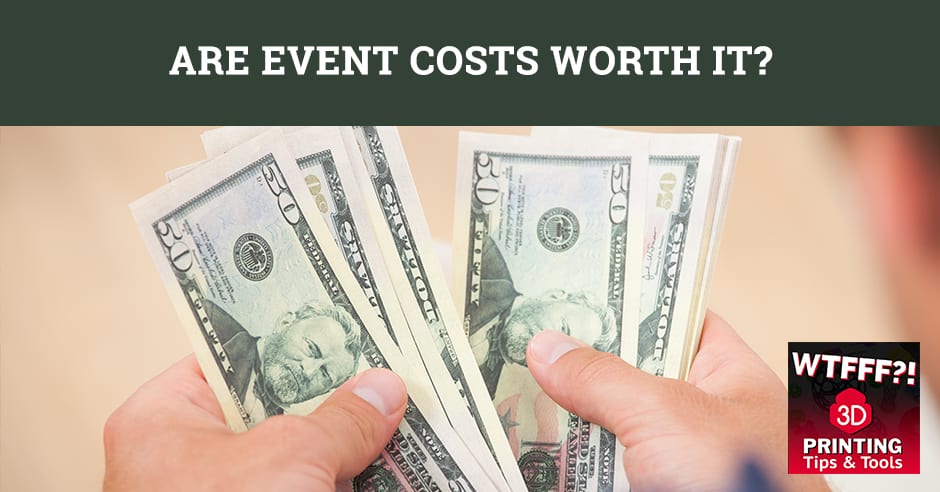 Going to events costs. As the date draws nearer, you may find yourself asking whether going at all is worth it or not. You’re not alone with this dilemma, and in this episode, Tom and Tracy Hazzard talk about how they feel about event costs. More than the financial costs it takes for you to attend, going to events offer so much more than we many give them credit for. Tom and Tracy discuss the benefits these 3D Printing events could provide to your business, along with some tips on finding out the differences between small and larger events.

Are Event Costs Worth It?

This is the Ask Us Anything Fall Events Week.

There are a lot of events coming up. Our question for this episode is, “Are event costs worth it?”

We have a lot of readers who are starting businesses and they’re trying to decide whether or not the costs are worth it. Are you going to get enough traffic? What I found and it’s shocking because I thought that the event costs would be rising already because there’s been so much visibility. The local SoCal MakerCon that we’re going to be going to and their booth costs was only $375. For a 10×10 booth, that’s big.

That’s inexpensive by this day’s trade show standards for any conventional and established trade show.

It costs for you to make a booth and transport it and do all of those things, but if you’re in business, you should already be having a setup that you go around to. Make a decision about what trade show to go to. There are many cost-effective ones that you should try out and for $375 if you get one lead that’s going to be worth it.

In Southern California, we’ve got little regional trade shows and then we have more significant ones that attract people from all over the country. As I think back on the last year of attending a lot of these events, I got as much out of the less expensive local event as I did the bigger promoted, more expensive event.

I think the difference between the bigger promoted event is usually that they have a speaker’s panel, but that’s it. They may have a day of conferences and things like that, but a lot of the smaller ones have speakers as well. They’re not as formal of a conference style. The information is still there. It depends on what you’re looking for. That’s how I judge it. If there’s an interesting set of speakers, there’s a good focus on it. Why not? Try it out.

If you’re a business that is starting out and you’re concerned about your marketing expenses, I would think showing at some of these less expensive events sooner rather than later is going to not only help get your word out about your product or service or company, which everybody needs to be doing, building awareness.

Especially if you’re going to be launching a Kickstarter at some point, having some demo, some way to generate a mail list and be building fans already. That would be a great way to that.

These more regional events are an inexpensive way to start to do that as soon as possible. I would not wait.

Event Costs: Showing up to some of the less expensive events ooner rather than later is going to help get your word out about your product or service or company.

I think people in this market are trafficking the entire show. It was true of some of these regional last year. It wasn’t a bad location. It didn’t get visibility. Everybody’s walking around to see every single booth.

The show is not so big that you can’t do it in a day or two days, whatever size that show is.

Our opinion is it’s worth it. Go out there to that local event.

A good example was we met that Chinese filament manufacturer and we saw them at the Burbank show.

It was the 3D Print Expo.

We saw them there and it interests us. It happened to be that I was traveling to that exact area in China. I stopped by and saw their facility and met them in person. The salesperson there said to me that it made the trade show worth it. The fact that she got to show her boss that someone from the US showed interest in them. Although we haven’t bought filament from them yet, we showed interest in them and they got some visibility from that. That meant a lot to them and that made it worth the cost for them.

That event I think was more expensive but still worth it for them. You’ve got to get the word somehow out.

Good luck with getting a marketing awareness of your product and your service. This is a great way to do it. If you have an event or you want to see some events, we have a resource page on our website at HazzDesign.com.

I was trying to add to it that no matter how much we’re out there looking, trying to find events, there’s always more and we’re happy to add them.

You’ve got to let us know.

Thanks for reading. We hope this was helpful.