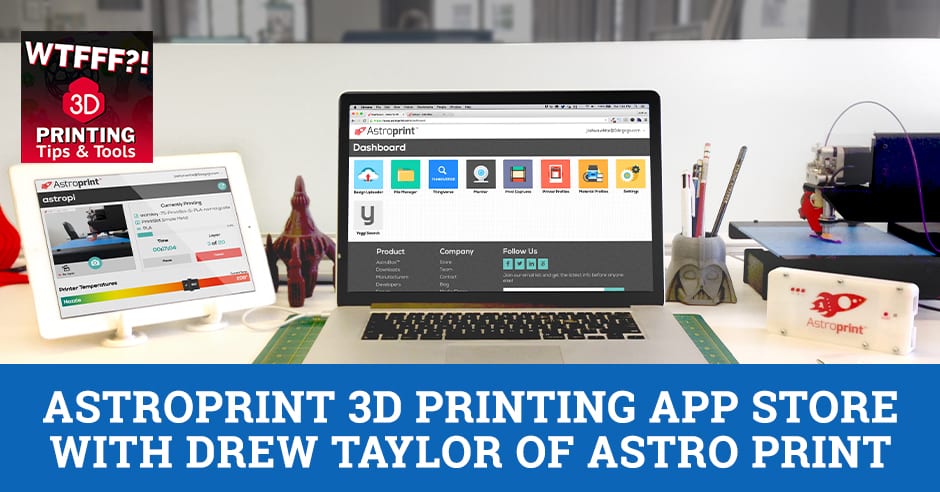 What does a coder and world traveler like Drew Taylor do when he falls in love with 3D printing? Well, of course he leaves his former career behind and starts AstroPrint 3D Printing App Store. In this WTFFF?! episode brought to you live from the show floor, Tom and Tracy Hazzard discuss how AstroPrint is positioning itself as the “Android” of the 3D printing space by providing apps to improve and enhance the 3D printing process. The apps provide for remote monitoring of multiple printers, better access to file repositories, cloud-based file repairs, and more. This company is rather uniquely based San Diego and Spain. Check out the podcast to learn why AstroPrint is the real deal.

Drew Taylor is one of the founders of Astroprint, and we had a really good interview with him.

Here we are at SoCal MakerCon. I’m talking with Drew Taylor of AstroPrint. I’m interested to learn what this is all about. I’ve heard some good things. Can you tell us a little bit about yourself and your company?

My name is Drew Taylor. I’ve lived all over the world and done lots of different things. I grew up in North Carolina. I lived in Hong Kong. I lived in New York.In much of my wandering, I was an acupuncturist for a long time. I was trying to develop some medical prototypes that I was going to sell into the physical therapy world and bought a 3D printer to make these prototypes. I fell in love with 3D printing quickly. I fell out of love with medical prototypes.

I don’t blame you.

I’m leaving out so much, but along the way, I taught myself how to code and had done some small software startups on my own. I saw the software issues in 3D printing and I saw what needed to happen and what the market needed and I decided to fix those problems. That’s a little bit about me and it brings us to AstroPrint. AstroPrint is a software platform. We like to say that we’re the Android of the 3D printing space. In that sense, we have software that runs on a 3D printer that makes it both wireless and simple to operate. That means anybody can control the machine, no matter what their technical skills are and they can do so from any phone, any tablet, any remote computer. On the other side of our platform, it’s like the Google Play of the 3D printing industry. It’s a 3D printing app store, which brands and developers can distribute applications and content straight from the internet into people’s 3D printers to the printer owner.

Give us an example of some of these apps.

Our most popular app on the platform is our app called Monitor, which is for remote monitoring. With the remote monitoring out, you can see all of the 3D printers that you have connected online simultaneously and then see what’s going on with all of them. You can start and stop prints on them. We have people, for example, that use this in print farm situation. They have twenty printers running. They use one tablet. They can see what’s going on with all twenty printers. Walk around, starting to print on this one, cancel print on that one, and there’s no need to have a computer hooked up to each machine. There’s no need to go back and forth to some central computer somewhere. That’s remote monitoring. Other people use that app to cancel prints. They’re running a ten-hour print, but they want to go to their kid’s soccer game also. They can go to that game, check up on their phone, “The print looks like spaghetti.” They could cancel. That’s one of our most popular apps.

Other than that, we have a content repository. The first one that we did was Thingiverse. We also have CGTrader. Soon, MyMiniFactory and a few others will be on there. We’re talking to some major brands and toy companies about coming on as well, but contracts aren’t signed yet. With this, you could search Thingiverse right on your phone or tablet or on our app, find a model, and then start a print right there. What happens is, when you start the print, our Cloud Slicer takes over and figures out the settings you need for your printer. You don’t even have to know what the slicer is, you just print. Our system figures out which slicing engine, what settings need to be used, and prepares a model and wirelessly distributes it.

It repairs it too if it needs it?

For that one, it will repair some basic repairs. This is a great segue. We didn’t even talk about this, but segue into another app on there. All of our apps have been free. All the ones that we produce, we intend to make free. Our first paid app went on the platform and it was developed by a company, Materialise, which is a public company that makes 3D printing software mostly in the industrial space. They’re moving into FFF printers and whatnot. They have a cloud-based file repair application called 3D Print Cloud. They integrated it as an app on our platform so that right from AstroPrint, you can take any of the files you have in your AstroPrint account and send it through the Print Cloud to be repaired and sent back. They charge for that. I don’t know how much you guys want to get in the business models. We do a 70/30 split in the same way Apple and Google Play do with their apps store.

The biggest benefit is that as we get more and more of these apps on the platform, they’re together. For example, you can open the Thingiverse app and you’re not going to Thingiverse, you’re opening it in our system and you can search Thingiverse, find a model, maybe print it, or you can hit the back button and then open up the CGTrader app. We have a Yeggi app on there as well. MyMiniFactory opens up. Let’s say, in the future, something like a Disney app. It’s all right there and there’s a back button to go back and open up the next one as opposed to navigating pages and searching the different webpages.

That’s why I’m asking you because every month I do a content of the best of. Let’s say the holidays are coming up and I’ll do the best holiday ones. I’ll go out there and I’ll search. It takes me hours not just to search the libraries, but to go from library to library. To be honest with you, the bigger problem is their library is not as much searching because their libraries aren’t tagged properly. It makes it hard to find what you’re looking for.

We feel this helps. They’ll still have to solve those problems. We view our company as a true platform play. We want to be like Android and Google. These first apps, we’re handholding a lot of these companies and we’re helping them develop the apps or even developing quite a bit of the app or them, obviously with their permission and whatnot. As we release our APIs publicly, it’ll be third the party’s responsibility to build your own app like with Apple. If you build an app and people don’t like it, they’re like, “We’re going to promote this one that people do like.” We want everyone to succeed. Maybe we could come up with guidelines.

You need better search criteria and categories. It makes it hard to search. That is a problem, but an easier way to search sounds fabulous too because it’s time-consuming. You’re based in San Diego. You’re opening an office in Spain. Why Spain? 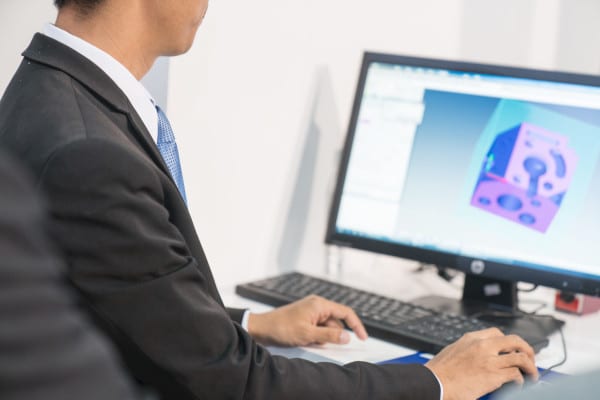 AstroPrint 3D Printing: With AstroPrint, anybody can control the machine no matter what their technical skills are.

It’s exciting. I haven’t even gotten to visit their office yet. I’m the CEO of the company and I haven’t been to the new office. One of our three founders is originally from Spain, dual citizenship. He’s lived over here, worked over here for fifteen years. He had young children. He was on a trip back to Spain and realized, “Around the grandparents, it can be a bit easier.”

It is easier. Trust us.

He’s our CTO, by the way. Every line of back-end code of our site was built by him, an amazing guy. He started my workout to move over there. At the same time, he started investigating the startup scene and tech scene in Spain.

It was surprising to me and to him. He’s from Spain, but he hadn’t lived there in a long time.

We have a tremendous amount of Spain followers on our Instagram. They’re active, not only in the scene, but they’re promoting themselves worldwide and doing a great job of it.

With that, part of the incentive outside of all of this, we got into a small accelerator program in Spain and there’s a bunch of people helping. Quite frankly, it’s cheap to hire high-quality developers. It turns out, for about a third of the price of a developer over here, you can get one over there with experience. As an early-stage startup, that’s important. If we could triple the developers, it helps us get to a certain level and helps us accelerate the industry at a certain level. Since our CTO is from Spain, it’s not like remote workers, it’s a second office.

It’s vertical within your company and with support and leadership personnel there to guide.

We feel like we’re helping in Spain as well. That’s why a lot of the local community is helping us in Spanish VCs. They’re interested in what we’re doing and whatnot because unemployment for under the age of 30 is 50% in Spain. I was shocked when I heard it was that bad. People educated at the same time because of the way the education system works out. Bringing tech jobs to Spain, they’re like, “Please. What can we do for you?”

I’m glad we finally figured that out because we were trying to understand what was happening with Spain and the community there because we can’t tell from our little Twitter and Instagram followings. That’s great to hear.

Thanks for helping share with us and our audience what AstroPrint is all about. Hopefully, people will understand where they can go in order to make better use of their experience in 3D printing and perhaps use some of your apps and services. That’s great.

Thank you so much for having me and thanks for putting up with my voice.

We’re all dealing with that at the end of the day.

It’s been wonderful. Thank you.